The Oscars have a Dave Grohl problem: A famous straight white guy everyone likes can always find his way on stage

Grohl may well be the nicest guy in rock, but his In Memoriam performance was dull, and his appearance pointless 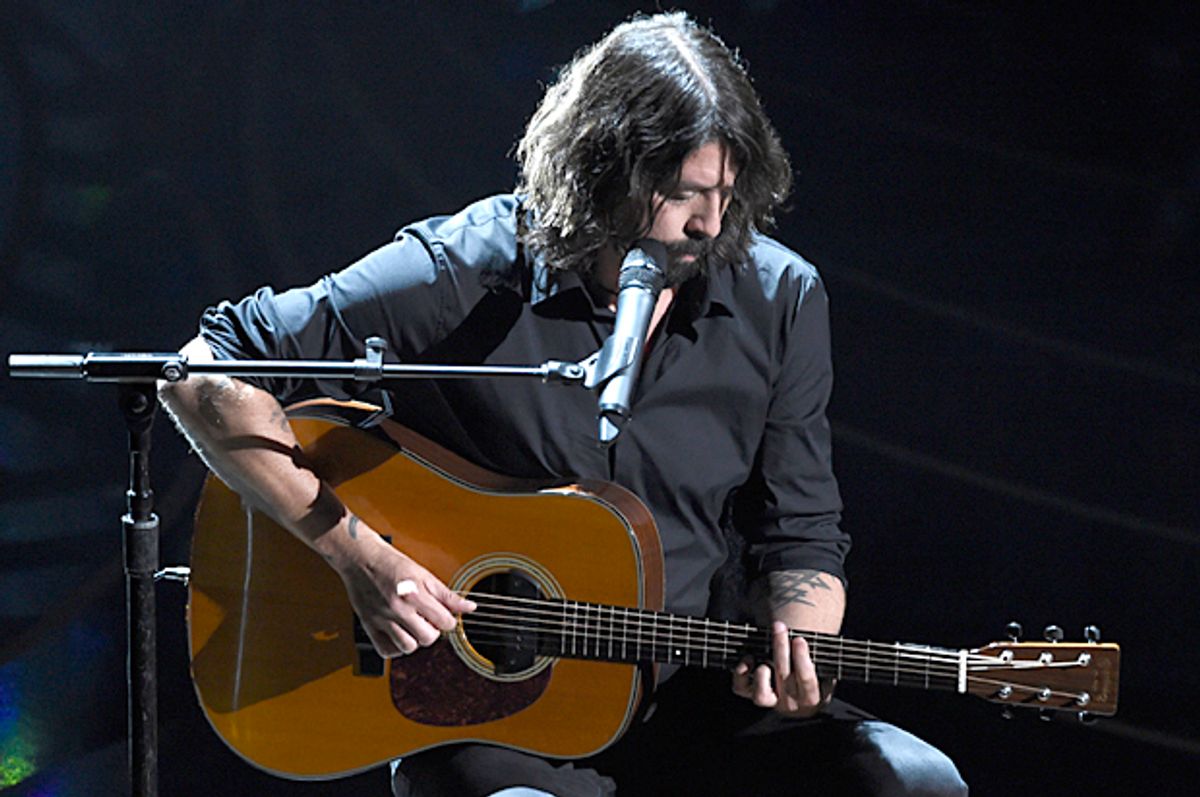 Last night’s Oscar broadcast was one of the liveliest in memory, in part because of Chris Rock’s smart, biting monologue and the productive tension around the diversity issue.

But one of the spots was a little weak: The “In Memoriam” passage that should have been poignant came across as more lukewarm. And it’s hard to say this, since the musician who performed is almost universally popular and was in one of the best bands of the last few decades. But Dave Grohl’s music made the whole thing a little predictable and kinda dull.

Grohl has a reputation as one of the nicest guys in rock music, and there’s no evidence that it isn’t deserved. He supports LGBT rights, has performed with just about everyone, and played the Concert for Valor, dedicated to veterans and active-duty troops. He cancelled Foo Fighters dates so he could welcome David Letterman back from heart surgery.

He’s spoken about the pointlessness of hard drugs, and seems genuinely excited to be playing music for a living: He’s resisted getting jaded despite many years in the game.

But the problem isn’t with Grohl as a citizen of the indie-rock and Hollywood subcultures -- he’s clearly an exemplary member of both -- or someone we’d like to hang out with. It’s that his music is sort of boring. And picking “Blackbird” – a lovely song, by perhaps the greatest group ever, that is so overplayed it’s hard to hear any more – he made the passage even less memorable.

Granted, you don’t want something too edgy or teeth-rattlingly loud for a roll-call of the late greats. In recognizing major talents like Leonard Nimoy, David Bowie, cinematographer Vilmos Zsigmond, and others who passed this year, the segment demanded respect. But there’s a way to frame something in a sensitive, reflective way without being predictable. Grohl has kind of become the official Gen X rock musician to big, mainstream audiences. And as great as the Beatles are, wasn’t there any way to pick a song – by them or someone else – that was a little less familiar?

If you skip the good deeds and clever quotes, Grohl becomes a decent, hard-working second-tier musician: His band Foo Fighters have a handful of catchy songs, but most of them sound like churned-up versions of other people’s music but with the distinctive parts sanded off. Grohl was probably a consensus choice for last night – safe, friendly, well-liked. But you don’t do the dead any favors by pulling out a predictable figure with which to honor them.

Points for Grohl for being a decent guy who thinks about his role in the Hollywood community. But maybe next year, the Academy will choose someone who’s a bit more daring and distinctive. Cecile McLorin Salvant is a young jazz singer – both traditional and idiosyncratic -- who would have been perfect. The Milk Carton Kids are an acoustic duo whose music matches older styles with a modern, inventive harmonic sense. Both acts could appeal to a wide range of generations, which is what a memorial ritual requires. A string quartet would have given some much-needed attention to a classical music group.

Grohl's inclusion is especially jarring in a year when not even all of the best song nominees were invited to perform on stage. If the Academy wanted to recognize a song that their members had nominated, it could have invited the British singer Anohni (nominated for the song “Manta Ray,” from the documentary “Racing Extinction”). Anohni, who is transgender and used to lead the band Antony and the Johnsons, may have been an unconventional choice to back the walk down memory lane instead of a more straight-forward best song performance. But if the Academy is going to show a commitment to honoring the diversity of the industry, this would have been a welcome move.

I hate to sound like I’m dissing a good citizen like Dave Grohl. The rock world needs more cool-headed team players like him. His fans have every reason to like his music; it’s perfectly fine. But next year, for its In Memoriam, can the Academy pick musical accompaniment that’s as substantial as the talent being honored?