The Supreme Court's massive abortion case: Everything you need to know about Whole Women’s Health vs. Hellerstedt 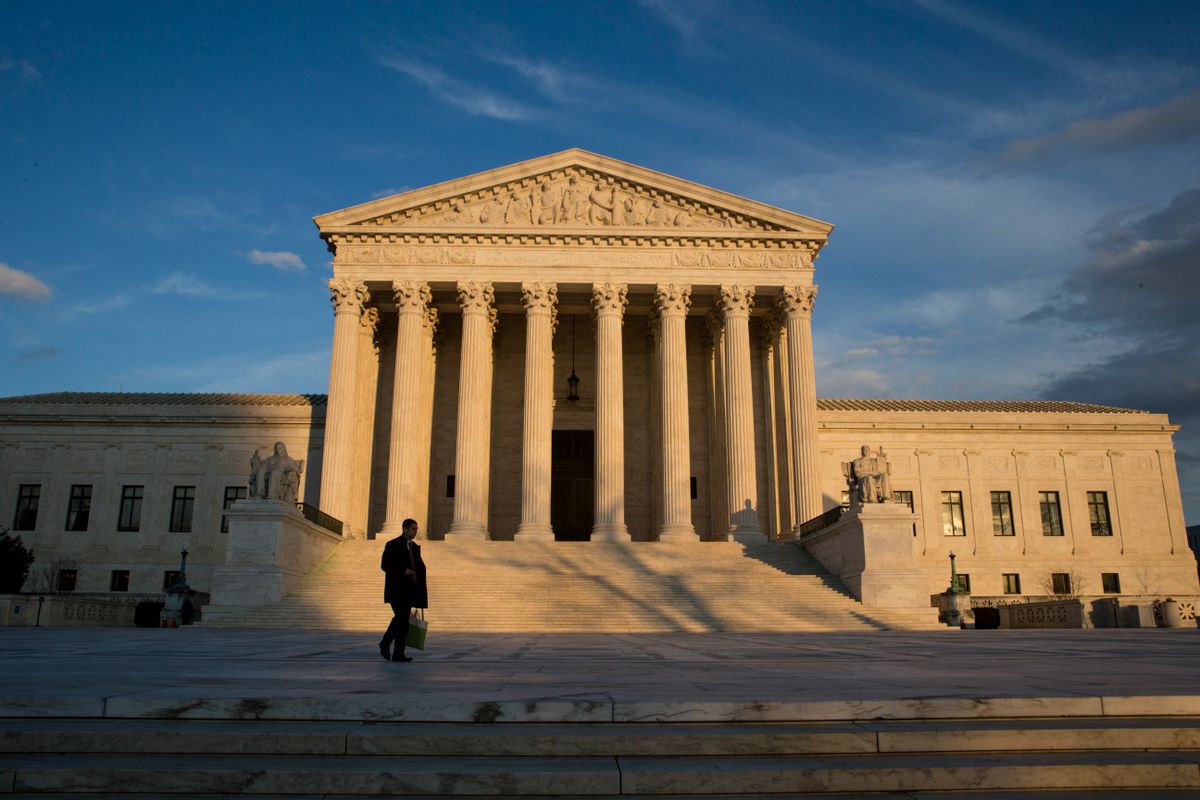 The Supreme Court is seen in Washington, Wednesday, Feb. 17, 2016, as preparations are being made to honor Justice Antonin Scalia, who died over the weekend at age 79. (AP Photo/) (AP/J. Scott Applewhite)
--

On Wednesday, the Supreme Court will hear arguments in Whole Women’s Health vs. Hellerstedt. This case challenges Texas's notorious House Bill 2 (HB2), which would effectively close nearly all abortion clinics remaining in the state of Texas.

The background: HB2 has four parts. One requires that all doctors who perform abortions have admitting privileges at a hospital within 30 miles. For abortion providers this requirement is hardly straightforward. Because of the danger and controversy that abortion providers face, hospitals have little incentive to admit those doctors. Additionally, admitting privileges usually require a minimum number of admitted patients per year, and because abortion is so safe and they rarely need to admit patients to the hospital, doctors can’t meet these minimum numbers.

Another HB2 provision requires that all abortion clinics in Texas operate as ambulatory surgical centers (ASC). This burdensome requirement is a costly trap for abortion providers, as ASCs cost millions of dollars to build and sustain, even though first-trimester abortions require no incisions and thus run very little risk of infection or complication. In the five years since the Whole Women’s Health clinic in San Antonio built its ASC, they haven’t used it once.

The third provision of HB2 outlaws abortions after 20 weeks.

And the final element of the law mandates at least three, sometimes four, separate appointments for those seeking a medical abortion. As clinics close all over Texas, women often live hours away from the nearest clinic, requiring burdensome travel for each one of these appointments.

In case you were wondering whether any of these requirements actually makes abortion care safer, the answer is a resounding "no." The American College of Obstetricians and Gynecologists (ACOG) and the American Medical Association (AMA) filed a joint amicus brief in the United States Court of Appeals for the Fifth Circuit in support of Planned Parenthood’s challenge HB2. They claim that the bill "imposes government regulation on abortion care that is not based in scientific facts or the best available medical knowledge" and that, in fact, HB2 jeopardizes "women’s health by restricting access to abortion providers and denying women well-researched, safe, evidence-based, and proven protocols for the provision of medical abortion."

Now for the politics: What’s at stake when the lawyers stand before our eight Supreme Court Justices this week? Quite simply: The fate of abortion access all over the country, not just in Texas, hangs in the balance.

The Supreme Court case Planned Parenthood v. Casey held that legislators may restrict abortion rights, but not if those restrictions cause women an "undue burden.” Thus, the key question in the case is whether the Texas law, with its four core restrictive provisions, is unduly burdensome to someone seeking an abortion.

Before the death of Supreme Court Justice Antonin Scalia, who made it clear that he believed Roe v. Wade was wrongly decided, many pro-choice advocates worried that this case could serve to bring Roe down altogether, if enough justices decided to use this opportunity to declare that there is, in fact, no constitutional right to an abortion. With Scalia's seat now vacant, that scenario is off the table, since there simply aren’t enough votes left on the bench for such a ruling.

Now all anticipation and anxiety shifts toward Justice Anthony Kennedy, the notorious swing vote. If Justice Kennedy voted to uphold HB2, the Court will likely hand over a 4-4 decision. In this scenario, the decision of the lower court, the Fifth Circuit Court of Appeals, that HB2 is constitutional, will stand.  In that case, the Texas law would be upheld, but only in Texas, establishing the abortion restrictions until the law, or one similar, makes its way to the Court again, after the appointment of a new justice.

In addition to Texas, 23 states have passed laws -- called TRAP ("Targeted Regulation of Abortion Providers") laws -- that regulate abortion providers above and beyond federal law.

A total of 45 amicus briefs --including those by the AMA and ACOG -- have been filed to encourage the Supreme Court to overturn this dangerous law. Organizations like the Academy of Family Physicians, the Society for Adolescent Health and Medicine, the American Nurses Association, the Texas Association Against Sexual Assault, the Service Women’s Action Network and Retired or Former Military Officers, and 163 members of Congress have all weighed in, asking the Supreme Court to consider the devastating effects of HB2.

One such brief submitted by the National Network of Abortion Funds asserts that HB2 burdens low-income women and rural women disproportionately, driving up the cost of getting an abortion by increasing the distance many have to travel to get to and from their procedure. This requires taking days off work, risking their jobs, and finding childcare, which can be difficult and costly to procure. The brief from the Service Women’s Action Network, alongside other retired military personnel, claims that because of existing restrictions on access to abortion care at military hospitals or by military providers, service women often seek abortion care outside their bases. HB2 would so dramatically reduce the number of clinics operating in Texas, and make the process so long and cumbersome, that those women would be unable to access abortion care at all.

These 45 briefs represent the stories of millions of Texas women, and people around the country, who are beseeching the Supreme Court to see the impact that abortion restrictions have on their lives, the lives of their family members, spouses, and children.

In a brief filed by 110 women in the legal profession, one former law clerk to a federal judge, now prominent human rights attorney, shared a story that helps highlight the stakes:

“I had not considered an abortion until one day I stepped back and took an honest look at my very grim reality: I had just quit my job at a fast food restaurant where I was earning minimum wage, I took a leave of absence from school, I had no source of income to support myself and no healthcare, I had already missed a semester of eleventh grade and was behind in my studies, I was living in a three bedroom house with nine people in an economically struggling area of town and I had no child care options available, besides dropping out of school . . . However, once I had my abortion, I was registered back in school three weeks later and went on to earn the highest grade-point average (GPA) in my high school, earning the opportunity to speak at graduation. I attended a public university for free on a merits-based scholarship because of my grades and became a student leader active in diverse aspects of student life on campus. Later, I obtained a master’s degree and a law degree. . . . My ability to have access to a low-cost abortion fundamentally altered the course of my life and my ability to fully participate not only in society, but in my life.”

In addition to meticulous data on dangerous economic, social and political impact of allowing HB2 to stand, the briefs contain hundreds of stories like this in thousands of pages that the Supreme Court Justices will read in the coming days and months. Each writer asks to be seen as a full person, with the right to integrity and the autonomy to choose if and when they become parents. They implore the Court to rule that 200 miles is too far to drive for a safe and legal medical procedure. And they ask that they be able to obtain one without fear of risking their health or losing their job, while maintaining their dignity.

This is what’s at stake.