"Yellow people with tiny dongs"?: The Oscars have more than one diversity problem — and it shows 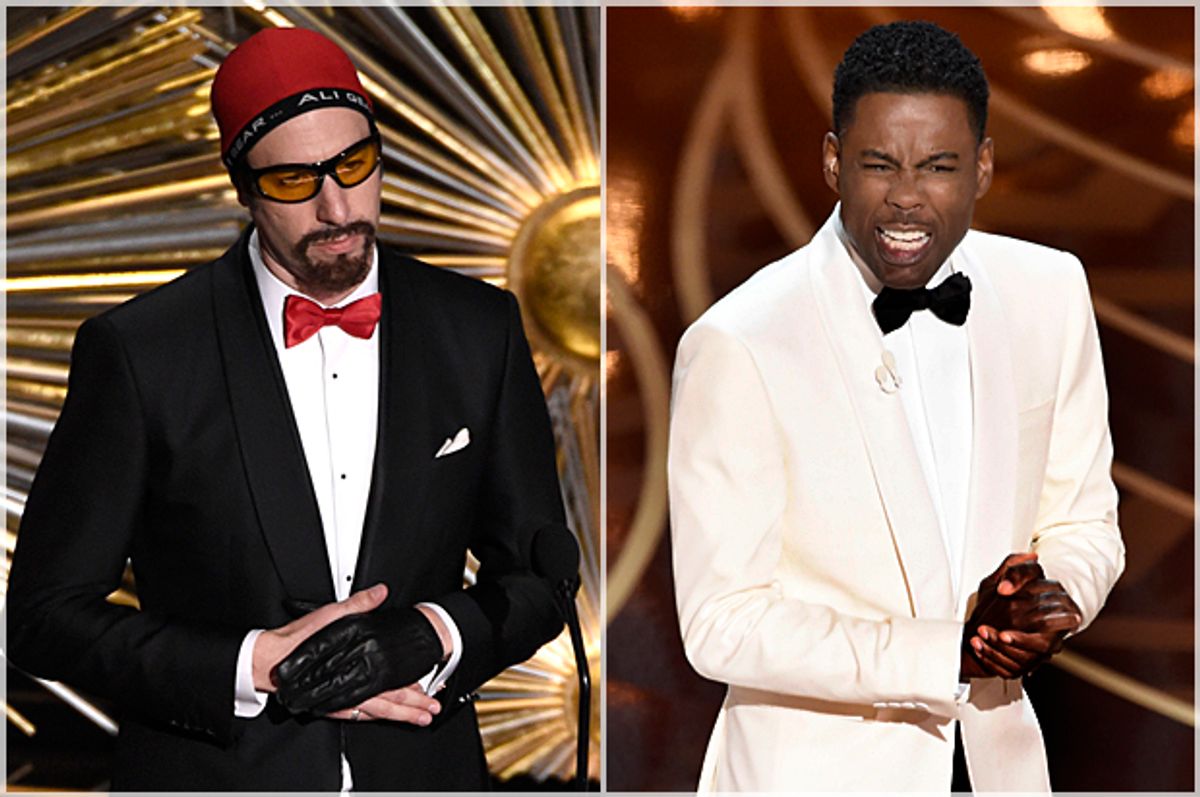 Last night’s 88th Academy Awards was a major platform, at the center of Hollywood’s glitterati, for a discussion of diversity in Hollywood. As I wrote last night, host Chris Rock made that the focus of the evening, paying an equally self-righteous and self-mocking attention to the contributions of black performers in Hollywood, from Academy Award winner Jamie Foxx as Ray Charles to outspoken black conservative Stacey Dash as the Oscars’ “diversity outreach coordinator.”

But diversity in Hollywood isn’t just about black artists and performers in Hollywood. Writer Kelly Oxford observed on Twitter last night, “There have been more droids on the Oscar stage than Latinos or Asians,” after three “Star Wars” robot-characters rolled out and spoke or beeped to the audience. First Nations actors were only highlighted through their supporting roles in “The Revenant,” which nabbed both the Best Actor and Best Director awards.

And to add insult to injury, rather too much of the Oscars telecast mocked Asians and Asian-Americans. It’s one thing for a black host to play with stereotypes of both white and black people to create a commentary on inclusion in the Academy Awards, especially when notable roles by black performers were not recognized by the Academy. It is another for that same host—and that predominantly white show—to turn to making jokes about another marginalized race, as if that somehow neutralizes the issue.

Directly after British-Indian Asif Kapadia won the award for Best Documentary Feature, for “Amy,” and was presented his award by Dev Patel, the award-winning British-Indian actor from “Slumdog Millionaire,” Rock segued into a bit about “the most dedicated, accurate, hardworking representatives” from PricewaterhouseCoopers, the accounting firm that counts the votes for the Academy of Motion Picture Arts and Sciences. Out strolled three Asian children in tuxes, toting mini-briefcases, introduced as Ming Zhu, Bao Ling, and David Moskowitz. It might have passed with just that—a jibe about Asians being hardworking, mitigated by how adorable the kids were—if Rock hadn’t pushed the gag even farther. “It’s okay, it’s okay, thanks guys. If anybody’s upset about that joke, just tweet about it on your phone that was also made by these kids.”

The main problem with the bit is that it’s not particularly funny, and that’s because its racial inflections are rather unexamined. Indeed, it’s hard to tell how the joke is supposed to land. Is it funny that they’re kids, or that they’re Asian kids? Did they make our phones because they’re Asian and “therefore” smart, or because their Asian and “therefore” child laborers? It is funny, I think, that one of the kids’ names is David Moskowitz—reflecting the enormous diversity of the American experience in a moment of brief incongruity between a name and the winning pigtails of a little girl in a tuxedo.

But the name is another dig, this time at the stereotype of the Jewish accountant. The real PricewaterhouseCoopers accountants, interviewed in the preshow, are the very nice-seeming Martha L. Ruiz and Brian Cullinan. But I suppose naming the kids after these two people would not have been quite as “funny.”

Sacha Baron Cohen, who presented the film “Room”—about “a room full of white people,” he quipped, in a joke so bad it almost had its own “womp womp” built in—got even more explicitly racist, once again, about Asians. “How come there is no Oscar for them very hardworking, little, yellow people, with tiny dongs?” he asked, in the stilted delivery of his persona Ali G. He pretended to be joking about Minions, but this was, again, a not-very-good joke about Asians.

It is frustrating, that 88 iterations of the Academy Awards—in Hollywood, which purports to be one of America’s liberal bastions—has not found a way to create opportunities for and subsequently honor more creators and performers of color. But it is outright horrifying to think that the Oscars feel that they have solved or circumvented the problem of inclusion by simply pointing racist jokes in another direction.

The conversation that has cropped up around #OscarsSoWhite has focused on the nominated discrepancy between black and white Americans. The most prominent boycotters have been black, and as these headlines indicate, a great deal of the mainstream discussion has focused on the historic marginalization of black creatives in Hollywood. But as the Economist observed in January, it’s Latinos who are demographically least served by the Oscars— Alejandro González Iñárritu’s back-to-back wins for Best Director notwithstanding.

Writer Jaya Sundaresh started a hashtag today, #OnlyOnePercent, to observe that Asian Americans have only received one percent of Oscar nominations throughout history. And as our own Paula Young Lee observed, stories about America’s indigenous population are usually written to showcase a white savior at their center. America’s racial diversity is blessedly complex; and while it’s wonderful that this year’s Oscars made enormous effort to discuss black inclusion in Hollywood, from “Good Morning America” reporter Robin Roberts on the red carpet to Chris Rock, Whoopi Goldberg, and AMPAS president Cheryl Boone Isaacs onstage, the conversation needs to become a lot more complex, too.