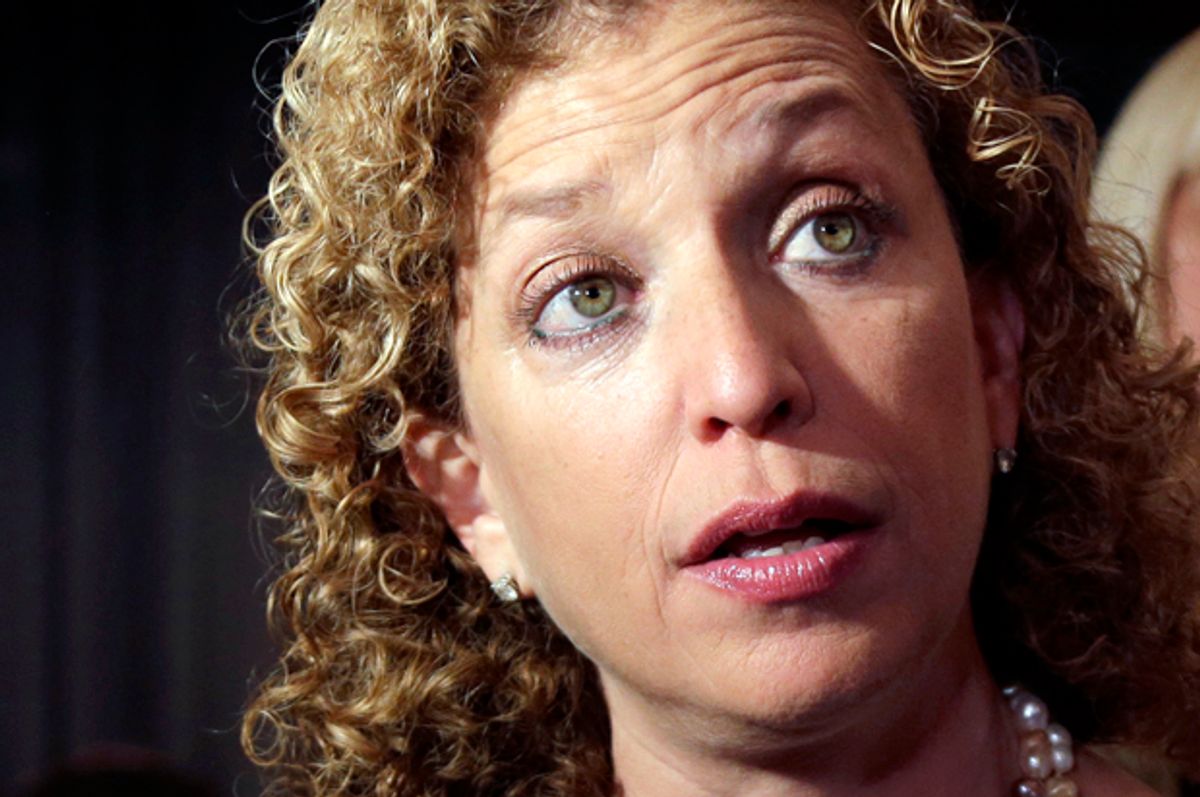 Debbie Wasserman Schultz, the chair of the Democratic National Committee, has joined the Republican assault on the Consumer Financial Protection Bureau.

Sen. Elizabeth Warren helped create the bureau in the wake of the 2008 financial crisis in order to protect Americans from the malicious practices of the financial industry — particularly banks, toxic mortgage lenders, debt collectors and payday loan companies.

The Consumer Financial Protection Bureau has created pending new regulations in order to protect Americans from payday loan sharks, companies that make enormous profits off of predatory lending, exploiting the poor and uneducated by advertising quick and convenient loans while downplaying the concomitant skyrocketing interest. The bureau hopes to rein in the industry.

Not if the DNC can stop it, however. For Wasserman Schultz has thrown her weight behind the Republican effort to sabotage the bureau's proposed regulations of the out-of-control predatory lending.

The DNC executive is co-sponsoring a new bill that would effectively "gut the CFPB's forthcoming payday loan regulations," the Huffington Post reports.

Wasserman Schultz — a close ally of presidential candidate Hillary Clinton, who co-chaired her 2008 presidential campaign — is also trying to get fellow Democrats to support the anti-regulation legislation, a memo obtained by the Huffington Post shows.

The bill, which is contradictingly titled the "Consumer Protection and Choice Act," would push back the bureau's payday lending regulations by two years. It would also let state laws on payday lending trump the federal regulations, falling back on so-called "states' rights."

The director of the Campaign to Stop the Debt Trap at Americans for Financial Reform says otherwise,  calling Florida's law "a sham" and pointing out that "it was backed by the industry."

Leading consumer protection, civil rights and social justice groups overwhelmingly oppose the legislation. In December, 265 groups — including the Consumer Federation of America, the NAACP, the National Council of La Raza — sent Congress a letter "strongly urging" lawmakers to vote against the bill.

The legislation would also "allow abusive small-dollar lenders to go on doing  business as usual if states enact laws similar to a Florida law, putting in place so-called  'industry best practices,'" the groups wrote. "Instead of protecting consumers, H.R. 4018 and the industry - backed Florida law would do more harm to consumers."

They point out that the bill would allow payday loan companies to charge 300 percent interest rates and to continue with "back-to-back lending without considering borrowers' ability to repay," leading to a "long-term cycle of debt."

In Florida, under the legislation Wasserman Schultz calls a "model," 85 percent of payday loans go to people with seven or more loans per year, resulting in "$280 million in fees drained from lower-income Floridians per year," the rights groups note, along with an additional "$3.6 billion in fees drained annually from consumers across the country."

This is not the DNC chair's first time attacking the Consumer Financial Protection Bureau. The Huffington Post reports: "Going after the CFPB is becoming something of a habit for Wasserman Schultz. In November, she voted to undercut the agency's standards on auto lending, helping car dealers charge higher prices to customers of color. She recently signed onto a letter to CFPB Director Richard Cordray asking him to exempt credit unions and banks with up to $10 billion in assets from consumer protection rules."

Other Democratic leaders from the House Financial Services Committee have joined Wasserman Schultz in her defense of the payday loan industry.

Progressives have widely criticized the DNC for acting in the interest of Wall Street-backed candidates like Hillary Clinton.

In a Feb. 11 interview, Wasserman Schultz admitted that the Democratic Party's superdelegate system, which consists of unelected party elites who have a large influence on the primary election, exists to ensure establishment candidates don't have to run "against grassroots activists."

Critics have argued that the DNC has limited the number of debates and scheduled them at very inconvenient times — such as the Saturday night before Christmas, during a football game — in order to reduce the number of viewers.

The Sanders campaign accused the DNC and Wasserman Schultz of "actively attempting to undermine" his bid for president.

A clear split is taking place within the Democratic Party, between those who openly align themselves with Wall Street — the Clinton and Rahm Emanuel wing — and those who act in the interest of working-class Americans — the wing of Warren and Bernie Sanders.

Wasserman Schultz and the DNC have made it more than clear which side they are on.