Hillary vs. Trump should scare Democrats: Why this isn't the cake walk you're probably hoping it will be

With Clinton and the Donald poised to deal fatal blows to their rivals' campaigns, it's time to look forward 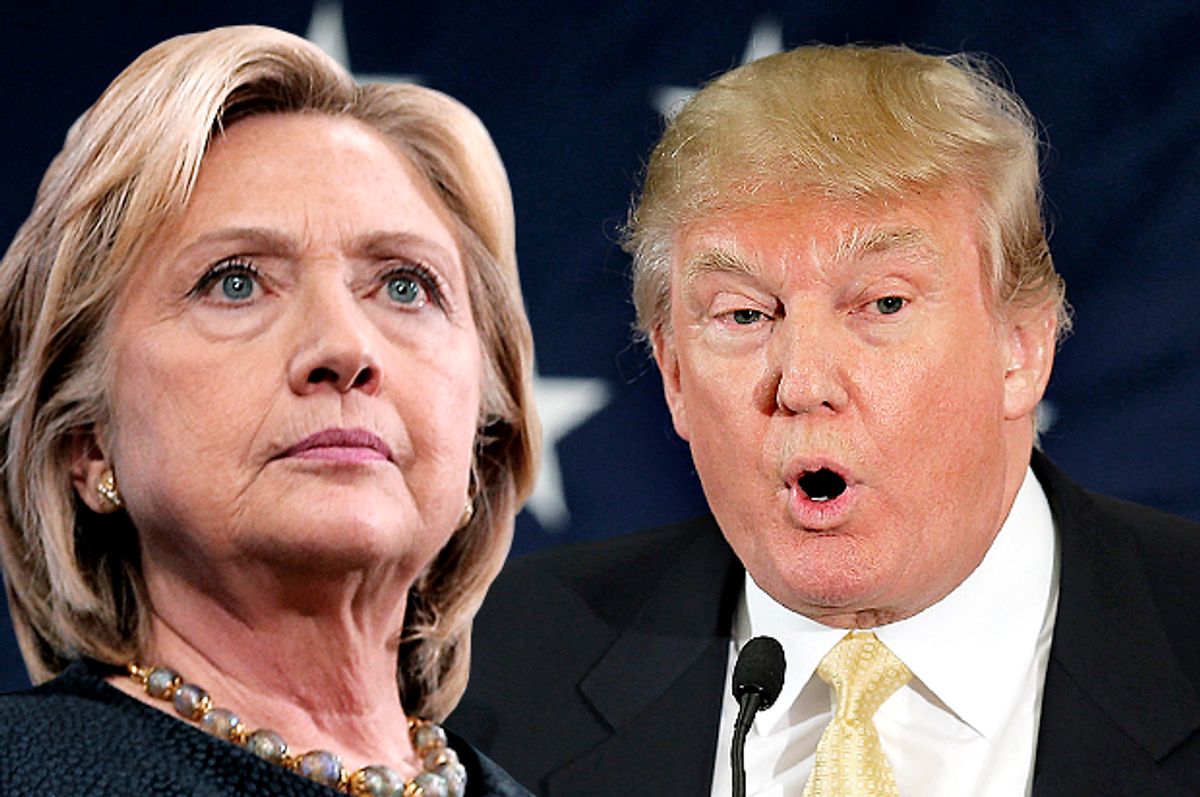 By the end of the day, barring a surprise, we'll have a reasonably strong sense as to who the nominees will be on both sides of the presidential election. If Super Tuesday plays out as the polls are suggesting, it should be reasonably clear that the dual delegate trajectories of Donald Trump and Hillary Clinton will lead them to becoming the presumptive nominees.

According to Nate Silver's almost eerily accurate projection models, Trump and Clinton will each win in Alabama, Georgia, Massachusetts, Tennessee and Virginia. Clinton will also win Texas, while Trump will take Oklahoma. For what it's worth, Cruz will win Texas on the Republican side, and Sanders will win in Oklahoma and Vermont, the latter by a massive margin.

But the polling and the menu of primary results will only tell a small fraction of the story this week. The true consequences of Super Tuesday can't be measured in delegates, momentum or margins of victory. If it hasn't happened already, the upshot is this: Republican voters not in Trump's camp should be suffering from an intense and ongoing panic attack, while every Democrat and every independent who's already panicking over the potential for a Trump presidency should be asking out loud whether the Clinton campaign has a game plan for dealing with Trump.

In other words, by tonight, just about everyone should be utterly terrified.

Much has been written about the rise of Trump and the potential for the fracturing of the GOP, but as we careen headlong toward a Trump nomination, it's becoming increasingly obvious that the party is hanging by a thread -- a thread with roughly the tensile strength of a strand of Trump's cartoonish hair. The last several days alone should be inducing severe flop-sweats and chest-grabbing heart palpitations among both Republican leadership and non-Trump voters. The embarrassment and disarray alone ought to be keeping Republicans awake at the wee hours of the morning, with thoughts of inevitable doom circulating on endless loop.

Regarding the embarrassment: First, Trump initially refused to disavow the endorsement of David Duke and the Ku Klux Klan. So, not only has Trump spent the last eight months race-baiting, specifically when it comes to Mexicans; his best response to Duke's de facto endorsement was to basically to dodge the issue with childish deflecting. (Ask a child whether they've misbehaved and their answer is invariably, "I don't know," which was Trump's response to Jake Tapper on Sunday.) Stack on top of the slag heap Marco Rubio going full ad-hominem on Trump, attacking the frontrunner's notoriously stubby fingers (and therefore Trump's penis size), as well as Trump's orange skin.

If all of this happened on the Democratic side, and Trump was the guy, I'd be the first in line to call for mercy-killing the party -- just dismantle it and start from scratch. Fortunately for the Democrats, the Republicans are committing a slow-motion suicide.

Additionally, regarding the Democrats, they ought to be suffering from near equal levels of panic, even before the networks offer up their projections for Tuesday night's winners and losers. The question that ought to be first on the list of every party voter and loyalist who's interested in defeating the GOP nominee: Do either Clinton or Sanders have a strategy in mind for defeating Trump? Specifically, do they have a sense of how to successfully compete against Trump's reality show style of campaigning? Honestly, I don't think either Clinton or Sanders has the first clue as to how to wrap their heads around Trump, especially in a one-on-one debate scenario. What we've seen so far is that Trump is basically an invincible idiot. A presidential savant. It doesn't matter what he says or how badly he drags down the process, his numbers continue to grow to a point where, now, polls show Trump besting all of the other Republicans combined.

How will Hillary Clinton face down this kind of unpredictable behavior? For that matter, what about Bernie?

If Hillary isn't thinking hard about how to counteract Trump's reality-show act -- and perhaps, strange as it may sound, even consulting some experience professionals from the world of reality TV -- Democrats should be freaking out almost as badly as the Republicans. Without hints or industry secrets from the producers who make reality shows for a living, Trump will bait and sucker-punch her almost as badly as he manhandled Jeb Bush. In a national campaign, the Democratic nominee will have no choice but to be ready for anything that bursts forth from Trump's orange yapper or else risk being politically vivisected time and time again. This isn't to suggest that the Democrats have to out-Trump Trump. It just means that Hillary, the would-be nominee, can't perpetually step into the bear-trap and expect different results. She will have to know how to dodge and move around Trump's stupid blurtings. It's absolutely compulsory if she's at all interested in winning.

There will be well-deserved celebrating among supporters of the frontrunners, Trump and Clinton, but Super Tuesday should only be viewed as a school night, with very serious work to begin Wednesday bright-and-early. It might be the only way to stave off the creeping insanity emerging from this election cycle.