If a Donald Trump joke lands on late-night TV, does anyone (who matters) hear it? 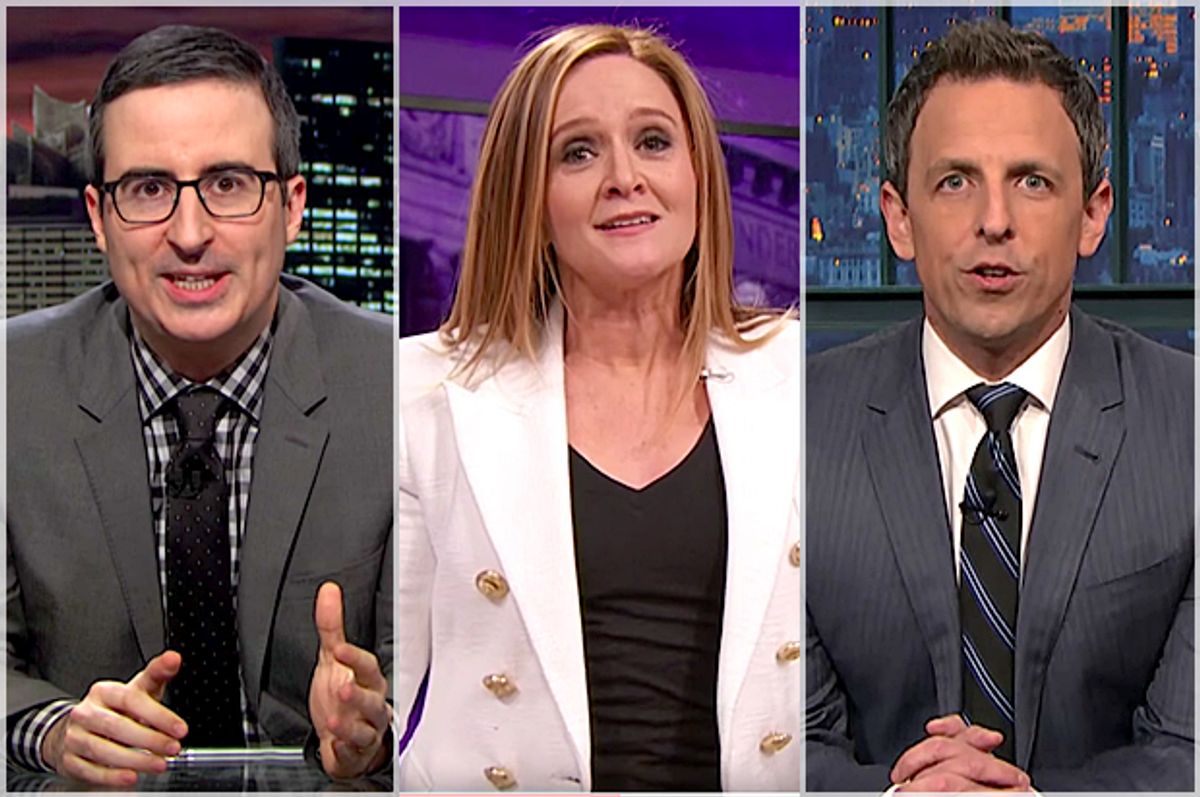 Political humor has rarely been this good. And after-11 television has never been this politically liberal. Late-night viewers have been amused by bits from Trevor Noah, John Oliver, Samantha Bee, and Seth Meyers taking on the madness of Donald Trump.

These comedians have come at the real estate mogul from smart and imaginative angles. Noah compared Trump to an African dictator. Oliver went off for more than 20 minutes, holding the candidate’s reality up to the claim of his supporters in a piece of political comedy that will be tough to beat this year.

Monday night, Bee jumped in, calling Trump “a tangerine-tinted trashcan fire” who was unleashed by lazy liberals. It was, she argued, the 2010 election – “one of those boring midterm ones that will.I.am does not make videos about” – that led to a conservative takeover and the rise of Trump. The rise of the rabid side of the Republican party ended up “leaving Americans so frustrated, they’re willing to vote for the first two-bit wall salesman who says he’ll stop Mexicans from raping their jobs... That’s right, if you didn’t vote in 2010, you built that,” she said, with Trump’s face behind her.

Seth Meyers was just as good last night, running the footage in which Trump pretended not to know who the former KKK wizard was (“I don’t know anything about David Duke, okay?”) or even to understand the definition of white supremacy. And then, after Trump said the problem was “very bad earpiece,” Meyers came back with: “You said David Duke and the Ku Klux Klan? I thought you said Daisy Duke and the Wu-Tang Clan — and I will not disavow the Wu-Tang Clan!”

Meyers’ bit was not only funny, it got at an issue that political scientists are starting to document – Trump’s deep connections to authoritarianism. “Authoritarians are thought to express much deeper fears than the rest of the electorate, to seek the imposition of order where they perceive dangerous change, and to desire a strong leader who will defeat those fears with force,” a Vox story about new political research reports. “They would thus seek a candidate who promised these things. And the extreme nature of authoritarians' fears, and of their desire to challenge threats with force, would lead them toward a candidate whose temperament was totally unlike anything we usually see in American politics — and whose policies went far beyond the acceptable norms.”

But as brilliant as these bits have been, do they do anything but make us laugh? Trump's electoral support keeps getting stronger. The more political shows draw fewer viewers than the others: As winning as Colbert is, he draws a smaller audience than Jimmy Fallon and Jimmy Kimmel. Colbert’s audience is just 17 percent Republican, and the Democrats, liberals, and lefties who watch his show are not waiting to see whether the host likes Trump or not.

It’s well established now that the niche’d nature of 21st century media means that websites, television shows, radio and everything else reach a targeted audience. But as pollster Jon Penn told The Hollywood Reporter, Fallon has a centrist following. "He's the unpredictable, cool dude you want to be friends with, and his silly, witty and nonoffensive humor is connecting with Leno fans and young, married, moderate women."

The irony is that the people who could have stopped Trump most decisively were conservative pundits and conservative candidates. Oliver, Meyers, and Bee have been hilarious this week. But giving the failure of the Republican establishment to take Trump on, praying that Rubio or Cruz start to land verbal punches might be a losing game. Fallon and Kimmel could decide that the short-fingered vulgarian won’t be good for them, though. Fallon does a mean Trump impersonation: Let’s see more of it.