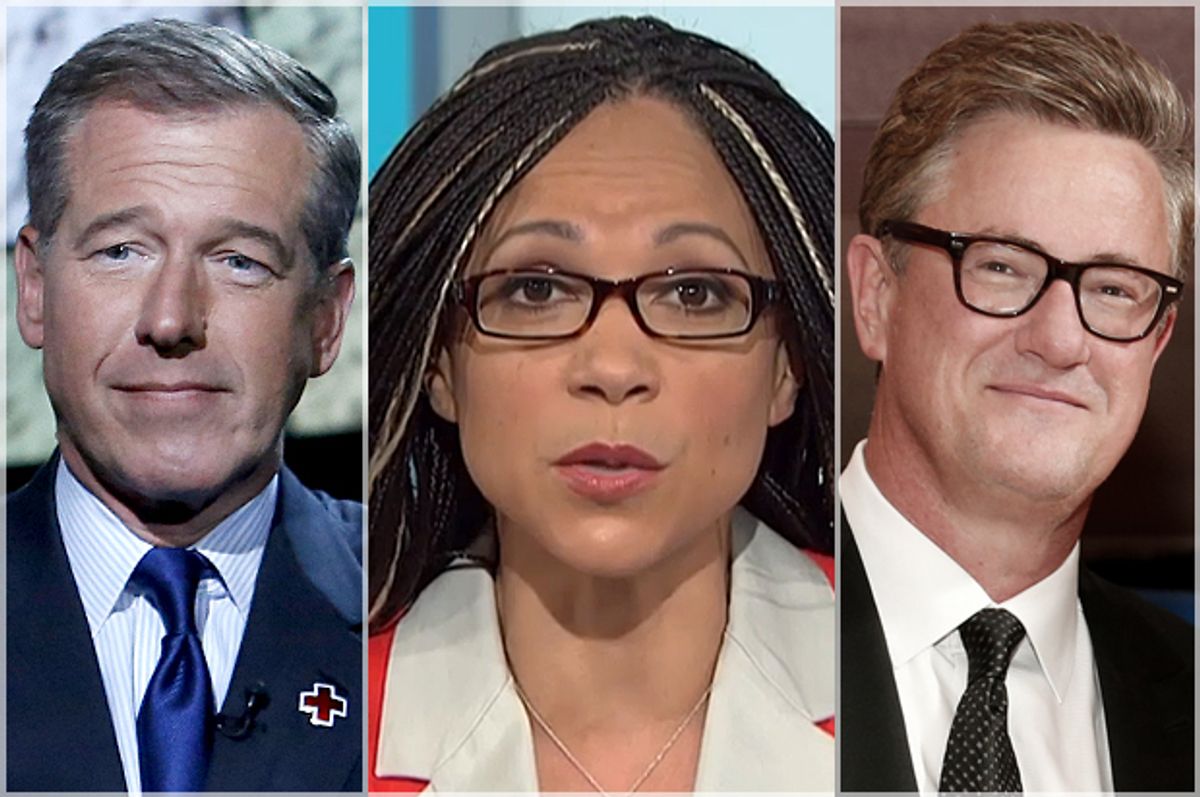 When MSNBC cut ties with host Melissa Harris-Perry over the weekend, one network executive described her as a “challenging and unpredictable personality.”

You can see why MSNBC’s brass might see things this way. When the network stripped Harris-Perry’s team of editorial control, she could have taken it in stride, counting herself lucky to be one of the few black women to host a news show. She could have brushed it off when MSNBC regularly pre-empted her weekend slot for two more hours of mind-numbing 2016 blather. She could have continued to wait patiently to hear from network executives after a month of unreturned emails and phone calls, just as she did when MSNBC summoned her to the Iowa caucuses only to bench her the entire time.

Instead, Harris-Perry violated a cardinal rule for minorities who want to get ahead in a world controlled by old white dudes like NBC chairman Andy Lack and MSNBC president Phil Griffin: She spoke up for herself.

“I am not a token, mammy or little brown bobble head,” the Wake Forest professor of political science wrote in a letter to her show’s staff, later posted on Medium. “I am not owned by [NBC executives] or MSNBC. I love our show. I want it back.” Over the weekend, Harris-Perry refused to allow the network to smooth over the rift by hosting her program as if nothing was wrong. By Monday, she no longer had one.

MSNBC’s decision to cancel the most racially diverse show on cable news is just the latest in what can only be described as a great whitewashing at the network. Amid sinking ratings over the past several years, MSNBC has sought to pivot away from liberal opinion toward hard news, bringing it in line with parent network NBC. For the most part, this has meant purging MSNBC of its hosts of color while keeping the middle-aged white guys in place.

The network has relegated black hosts Al Sharpton and Joy Reid’s weekday shows to the weekend. MSNBC announced Alex Wagner, who is Asian, would receive her own weekend slot after her own weekday show was cancelled, but has now reneged on that promise, according to CNN’s Dylan Byers.

As with Harris-Perry, José Diaz-Balart’s show has been frequently pre-empted by election coverage, leading fans to protest his absence from the air on Twitter using the hashtag #MasJose. A report from Hadas Gold at Politico casts further doubt on his future at MSNBC: Based in Florida, Diaz-Balart isn’t among the talent scheduled to cover the primary in his state.

Whatever one thought of Sharpton, Reid, Diaz-Balart and Harris-Perry, it’s hard to deny that they brought a different perspective to our political discourse. With them gone, what’s left is a lineup of Beltway insiders spouting the sort of conventional Washington analysis you could easily find on any of the other networks. They’re all white guys past age 40.

MSNBC is keeping Joe Scarborough, whose arrogance is only matched by his proclivity for getting things totally wrong. Despite the supposed focus on “hard news,” the network even toyed with the idea of extending his show from three hours to four.

Viewers can expect more softball Donald Trump interviews from “MTP Daily” host Chuck Todd, a former White House correspondent whom The Intercept’s Glenn Greenwald has called “as conventional as it gets.”

The network is also going ahead with its plans to re-air Bloomberg’s “With All Due Respect” featuring journalists Mark Halperin and John Heilemann. Halperin, who once pressed Sen. Ted Cruz (R-Texas) to speak Spanish in order to prove his Latino bona fides, is among the hackiest purveyors of drivel that passes for analysis. Alex Pareene, then at Salon, granted him the top slot in his annual list of biggest political hacks before the 2012 election, noting:

And while Harris-Perry’s open letter was considered, in the words of a network executive, too “destructive to our relationship” for her to return, Brian Williams’ years of lying about various reporting experiences was not. He now anchors breaking news coverage on the network.

Some commentators have bristled at the notion that Harris-Perry’s treatment had anything to do with her race. Fox News’s Howard Kurtz, for instance, said “it's really unfortunate that she played the race card” and that “given her extraordinary racial blast, I don't blame [MSNBC]” for canceling her show. Harris-Perry herself told The New York Times, “I don’t know if there is a personal racial component. I don’t think anyone is doing something mean to me because I’m a black person.”

Harris-Perry was right to qualify her remark by saying there was no “personal” racial component, because it’s hard to deny race is at play at all here. What most people don’t understand about racism is that only infrequently does it take the form of “I don’t like you because you’re black and therefore am going to cancel your show.” Instead, it informs the sorts of things that network executives value, meaning that, despite being a ratings failure, Scarborough’s uninformed bravado is prized while Harris-Perry’s substantive coverage of the Black Lives Matter movement or the Flint water crisis is considered quaint and wonky. At important moments during election season, you get kicked off your own show so a white guy can host it. Network execs stop taking your calls. Brian Williams gets to keep his job and you get fired for a strongly worded email.

What else do you call it when a network gets rid of all the minorities for windbags like Mark Halperin?

What’s maddening is that network executives will point to MSNBC’s improved ratings as evidence that this strategy is working, completely ignoring the fact that election season always boosts viewership. That’s the sort of nuance TV people just don’t have time for.

In the end, MSNBC’s whitewashing amounts to a lack of imagination for a network trying to reinvent itself; its lineup grows whiter by the day even as the country grows more diverse. America’s future looks like Melissa Harris-Perry and José Diaz-Balart, Al Sharpton and Joy Reid. Rather than “lean forward,” MSNBC's Lack is digging up an editorial strategy whose days are numbered.