The case against "saving" marriage 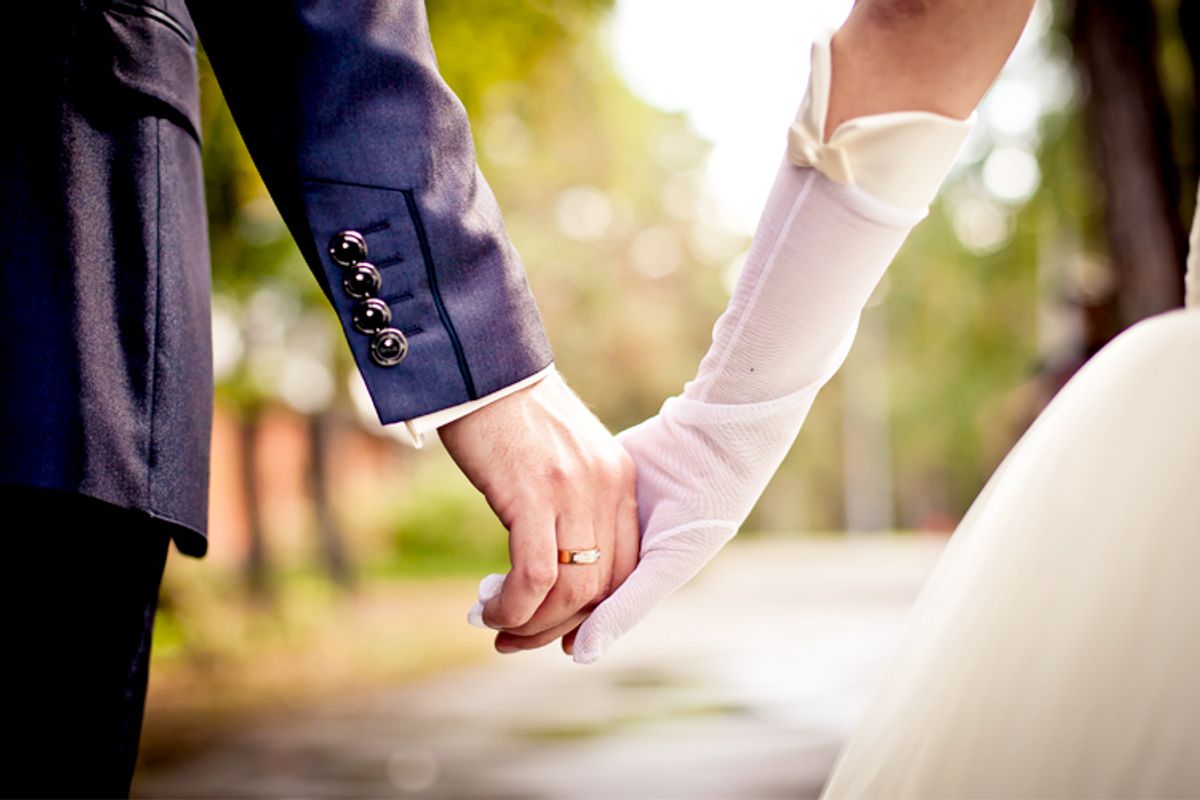 Marriage rates have been declining for more than half a century and single women now outnumber married ones. There are few guides better at navigating this new landscape than Rebecca Traister. In a recent New York Magazine article, adapted from her soon-to-be-released book All the Single Ladies, she offers an insightful, nuanced analysis of the plight and power of unmarried women “taking up space in a world that was not designed for them.” Traister argues that the current democratic policy platform may be more liberal than it has been in a generation in response to the growth of unmarried women. It’s about time. Public policy has lagged almost criminally behind in meeting the needs of single women, and especially single mothers, for decades.

But while a policy platform that stands to benefit unmarried women and mothers is necessary, it is not sufficient. There is no substitute for identity politics. Part of why the U.S. still has such inadequate public policies is the fear of publicly supporting families that conservatives have already convinced us are unequivocally bad, subpar alternatives to the married nuclear variety, especially “single mother” homes. Progressives should confront conservatives’ favorite national pastime, shaming single mothers (especially if they are low-income or women of color), with an equally powerful dose of approval and respect: Dignifying them by publicly affirming their inherent worth and equality with other families. That is still the third rail in politics.

Case in point: strongly “endorsing marriage” has become the one of the few agreements across political lines, even in today’s politically polarized environment. “Nearly everyone agrees that marriage itself offers stability and economic benefits to couples and to society at large,” historian Andrew Yarrow recently stated in the New York Times. (Who would want to disagree with “nearly everyone”?) There are serious consequences to this. If everyone agrees that marriage benefits society at large, it’s no surprise that married nuclear families are the gold standard against which we are all judged, and against which so many fail. Letting this idea go unchallenged creates a harmful cognitive dissonance that undercuts the work of progressives.

Marriage has been in the limelight for a decade now as the fight for marriage equality mobilized much of the country around a critical civil rights battle culminating in last June’s Supreme Court ruling guaranteeing the right to same-sex marriage. But outside the context of marriage equality, “endorsing marriage” is hollow. It does not lead toward a realistic or reasonable solution to anything. There is plenty the government can do, but successfully making and maintaining good marriages is not one of those things, as virtually all evaluations of large government funded marriage-promotion programs have shown.

Indeed, if marriage is what makes a family whole (a belief still imbedded in our language of “broken” and “intact” families), it follows that declining marriage and increasing non-marital birthrates would be used as evidence that the American family is in crisis. But as historian Stephanie Coontz has painstakingly documented, marriage has never been just one thing, and norms dictating the role of marriage and family have evolved significantly over time.

Marriage has only been a love-based institution for the past 150-200 years, and used to be rooted in assumptions of wifely subordination and male domination. Enslaved people were often not permitted to marry, since they were considered the property of enslavers. In the agricultural era, husbands selected partners based on strength and childbearing abilities, as they needed labor for the family farm. And until quite recently, women were still expected to marry for social respectability and financial security. Once middle-class women entered the paid workforce in droves during the 1970s (“working class” women have always done just that—worked) one of the main reasons for getting married disappeared, and many marriages dissolved.

The idealized period in the postwar 1950s and '60s when the “traditional” nuclear family model was briefly dominant is still misunderstood as a halcyon era, the passing of which is opportunistically lamented when bemoaning how family life has changed. “People may be disappointed that we don’t have more stable, long-term traditional marriages, but people have to understand that, inside that model, was a lot of suffering, heartache and exploitation,” sociologist Philip Cohen has cautioned when talking about that period.

Endorsing marriage has become a dog whistle, used to prime racist, debunked stereotypes about so-called absentee black fathers, to invalidate non-nuclear family arrangements, and to treat those within them as failures. The 35% of children today living in single parent families deserve real champions, but empathy for their hardships (and the hardships of their parents) is an empty gesture if it is used as evidence for policies designed to rebuild more nuclear families rather than to fight for the equality of existing ones. Marriage as the neoliberal answer to systemic, structural problems like poverty displays a willful ignorance about what marriage is and isn’t and what the state can and cannot do. Saving marriage is not like eradicating smallpox, reducing smoking, or improving motor vehicle safety. It cannot be “fixed” with a public health intervention.

Of course, affirming non-traditional family models does not mean condemning marriage. The two are not mutually exclusive. We are living at a time when the best marriages are better than ever before. But only those who have the time and energy to invest—along with access and availability of good partners—are experiencing these historically unprecedented benefits. That gives marriage a socioeconomic dimension that manifests in even greater inequality. Poor people are not only missing out on the potential rewards of marriage they may want, but being vilified for failing to do so.

This is why the dogma, masquerading as common sense, that individuals should be married and financially stable before having children is so dangerous and flawed. It excludes large swaths of the country—people who for a variety of reasons outside their control will never meet those two conditions—and suggests that they do not deserve children. Half of the adult population is not married, and nearly a third of Americans are in or near poverty. That is a lot of people who don’t fit these criteria. Follow this path too far and you get dangerously close to eugenics.

Why do we continue to treat the decline of marriage as a problem that needs fixing at all? The most generous interpretation is that is where we have let the data lead us, as seems glaringly apparent from the dozens of reports released in recent years in the U.S., many from conservative and moderate think tanks, with the same finding: That family structure matters, and children raised in stable, married two-parent families typically fare better on a number of outcomes than those raised in single-parent homes. This is a reasonable, if partial, descriptive finding. But it has been contorted into a mandate for more stable married parent homes, and few have been brave enough to respond with the truth: that it is a waste of energy and resources to continue to prescribe the un-prescribable. Plenty of countries have more single parents than us and much stronger and more stable families. Allowing families and children to struggle in poverty has always been policy choice, not the inevitable result of a specific family structure.

The myopic focus on married-parent homes as best for children has also caused a neglect of the data that contradicts this narrative, and plenty exists. One of the most comprehensive longitudinal studies that looked at adolescent well-being across twelve different family “types” found that one group of adolescents actually had better outcomes than children raised by married parents in their first marriages: Children raised in multi-generational households with never-married single mothers. Doesn’t that suggest that we may be thinking about the ingredients of good families, and the importance of marriage, all wrong?

Right-wing conservatives may be out of touch with the values and lives of mainstream America, but they still claim the monopoly on “family values,” and their misguided nostalgia masquerading as policy thrives because of a huge, unimaginative void when it comes to alternatives. With high profile organizations like Focus on the Family and the Family Research Council, conservatives have created an enormous, generously funded infrastructure that promotes a “God-ordained institution of the family” and “marriages that reflect God’s design.” A lack of intentionality and imagination in developing other roadmaps has allowed the messages of the right to drift slowly and imperceptibly toward the center for decades.

A framework for supporting families that meets them where they are is not abstract or impossible. It is the difference between policies intended to “endorse” marriage and help revive married nuclear families and public policy that start with the goal of supporting families as they actually look right now. It is the difference between the deeply offensive, paternalistic belief that even though low-income single-mothers have made mistakes we should still help them so their children can “break the cycle of poverty,” and believing that families led by single-mothers have as much inherent value and dignity as anyone else. It is recognizing that poverty is an issue of systemic inequality, not personal failing. In everyday practice, it begins with conversations and questions like: “What do we know about why some single-parent families thrive while others do not?” not ones that begin with the question “How can we decrease the number of single parents homes or get them married?”

We honor families when we not only create policies that address the existing circumstances of people’s lives, but when we affirm them without measuring them against the nuclear family ideal. For too long, we have let the idea that marriage is the key to our society’s wellbeing stand, when in fact, achieving wellbeing—through financial stability, access to fair-paying work, healthcare, housing, and a strong communities of friends, family, and intimate partners—does not require or depend on marriage at all.

The conversation about the future of marriage and families requires vision and bravery. For politicians and policy makers, bravery means refusing to waste time tepidly endorsing marriage, and instead, publicly advocating for the worth and dignity of families and individuals as they are now. Bravery is saying that marriage does not need saving, but real people do.