Hello. It's me. Now quit using my songs for your racist, Islamophobic message, Mr. Trump!

Another election year, another round of candidates appropriating artists' songs. Here's this year's crop 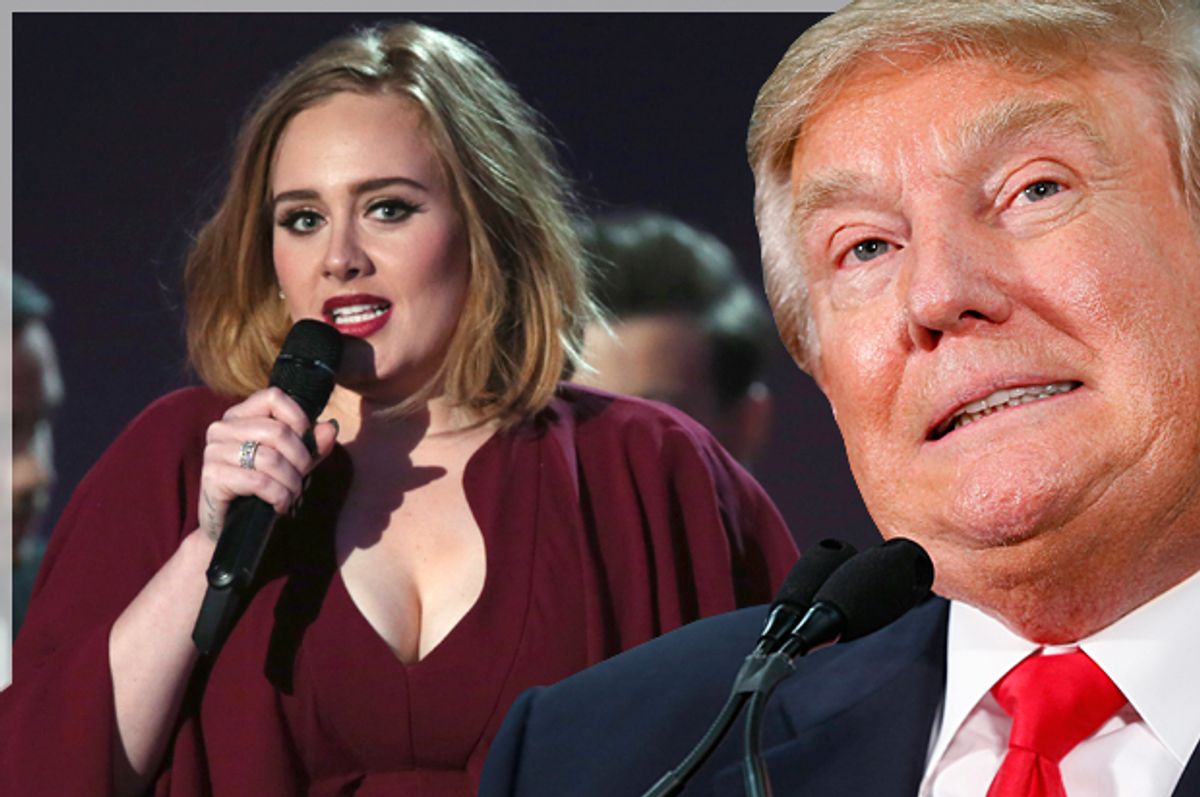 In 1998, Bobby McFerrin demanded George H.W. Bush stop using his song “Don’t Worry, Be Happy.” He was preceded by Isaac Hayes, who in 1996 told the Bob Dole campaign to stop ripping off his classic song “I’m a Soul Man” by turning it into the offensive “I’m a Dole Man.”

Bruce Springsteen told Ronald Reagan, Bob Dole and Pat Buchanan they could not use his widely misappropriated song “Born in the USA” for their political ends. Tom Petty instructed George W. Bush and, more recently, Michele Bachmann to stop using his songs. Heart took Sarah Palin to task and Jackson Browne launched a lawsuit in 2008 against then-candidate John McCain, the Ohio Republican Party and the RNC for their use of "Running on Empty." When Paul Ryan declared Rage Against the Machine to be one of his favorite bands, Tom Morello retorted, “Paul Ryan is the embodiment of the machine our music rages against.”

As others have pointed out, songs written by musicians who told politicians to stop using their music make for an excellent playlist.

The 2016 election cycle is no different, with a healthy crop of musical resisters already taking shape. It should be noted, in a season defined by the alarming rise of racism and Islamophobia, the musicians getting press for taking action to stop non-consensual use of their music by political campaigners are overwhelmingly white.

1. Hillary Clinton, Rebel Girl? Punk rock legend Tobi Vail, founding member of Bikini Kill, sent a copyright infringement complaint to YouTube over use of the song "Rebel Girl" in a pro-Clinton advertisement made by two of the former secretary of state’s supporters—the California-based couple Eric Wing and Stacey Sampo. In the video, footage of Clinton from the '90s to the present is overlaid with the song whose lyrics blare: “When she walks, the revolution's coming."

The advertisement had already raised eyebrows. After Clinton campaign head John Podesta tweeted the video, one Daily Kos blogger argued that a rebel girl "does not serve on Walmart’s board of directors and stay silent as it viciously attacks unions… A 'rebel girl' does not submit to the military-industrial complex and cast votes for unnecessary wars.”

Vail, whose social media account indicates she is a strong Bernie Sanders supporter, told the publication Death and Taxes that she sent the complaint because “we don’t authorize use of our songs in advertisements.” She explained, “Bikini Kill is a collective, we collectively own our entire catalog including songwriting, so in order for a song to be used they need to have the permission of the whole band.”

The video has since been taken down, but you can watch it here.

2. Hello, it’s me. Stop using my song. Donald Trump rallies across the country have been zones of racist and Islamophobic incitement, and apparently he has been playing Adele’s songs as the soundtrack, including her hits “Skyfall” and “Rolling in the Deep.” Adele made it abundantly clear that she is not okay being used for such propaganda. "Adele has not given permission for her music to be used for any political campaigning," the musician’s spokesperson told CNN earlier this month.

Adele’s statement followed another incident, in which Steven Tyler of Aerosmith sent a cease-and-desist letter to Trump telling him to immediately halt use of the band’s song “Dream On” because it gives the “false impression” that the band member “is connected with or endorses Mr. Trump's presidential bid."

And Allee Willis, who wrote the 1984 song “You’re the Best,” which was featured in Karate Kid, was furious that Trump was using the song during his campaign stops. “This guy’s mouth would get us into a nuclear war in three seconds,” Willis told the Daily News in August. “He is opposite of everything I stand for.”

3. Trump Gets #Berned by Neil Young. When Donald Trump kicked off his presidential campaign to Neil Young’s “Rocking in the Free World,” the musician immediately hit back, releasing a statement declaring that Trump was not authorized to use the song. “Neil Young, a Canadian citizen, is a supporter of Bernie Sanders for President of the United States of America,” the statement continued.

In an amusing twist, Young then turned around and offered Sanders use of his music during the campaign. Sanders has since taken him up on the offer, last summer strutting into a town hall meeting to the very song Trump was told to stop using.

4. Time for Marco Rubio to find something new. Perhaps the most surprising part about the Rubio scandal is that he is a fan of electronic dance music. At least two EDM musicians, however, do not appear to be fans of Rubio. The Swedish duo sensation Axwell and Ingrosso sent a cease-and-desist letter to 2016 candidate Marco Rubio, who has been walking onto the stage to the musicians’ song “Something New.”

The band told Business Insider last April that they didn't give their permission for this song to be used and don't want to be affiliated with "a particular party during the upcoming presidential race.”

Sarah Lazare is a staff writer for AlterNet. A former staff writer for Common Dreams, Sarah co-edited the book "About Face: Military Resisters Turn Against War." Follow her on Twitter at @sarahlazare.