On Super Tuesday, Bill physically entered at least two polling locations to woo voters, which may have been illegal 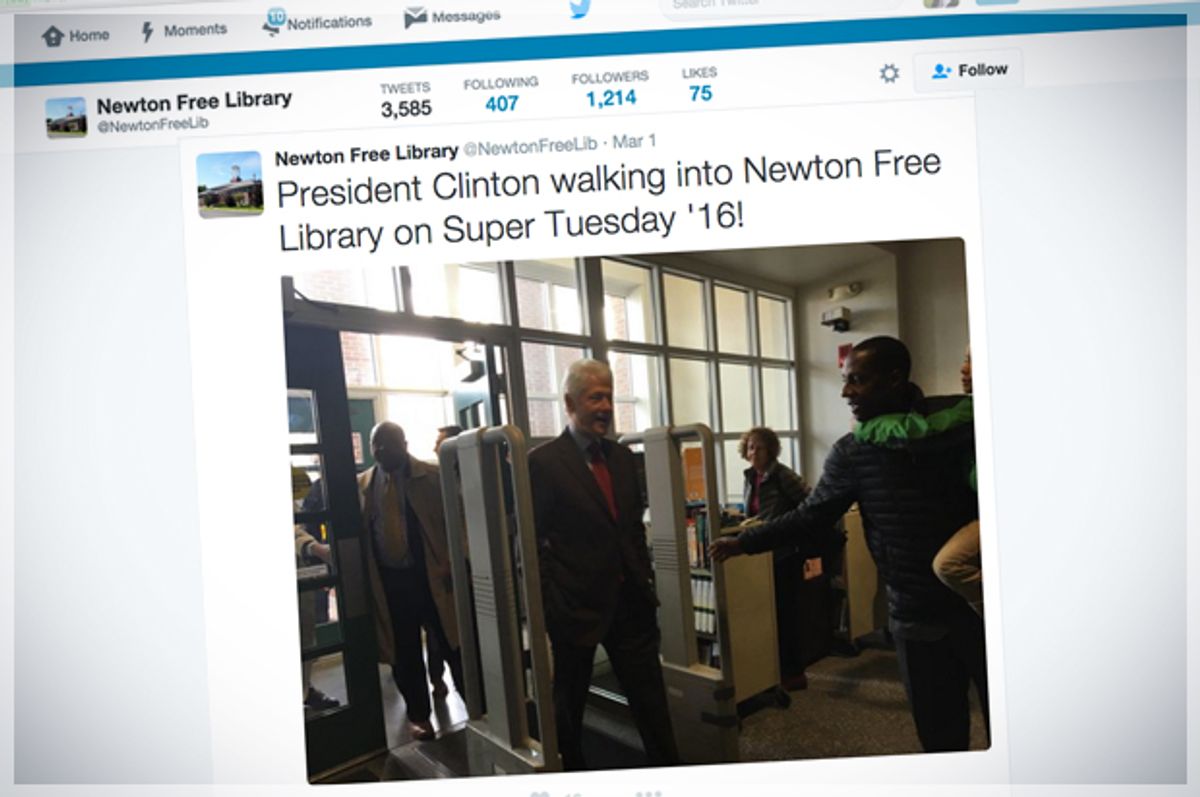 For Massachusetts, the Super Tuesday primary was very close. Hillary Clinton beat Bernie Sanders by just 1 percent. (For comparison, in 2008, Hillary beat Obama in the state by 17 percent).

A more interesting and less reported story about the heated primary, however, was that Bill Clinton may have broken Massachusetts voting law by telling people at polling locations to vote for Hillary.

In an article titled "Bill Clinton Gets a Little Too Close to Voters in Boston," The New York Times notes that Bill, who "was ranging over the state trying to pump up voters to cast their ballots for his wife," physically went into at least two polling locations.

Massachusetts Secretary of State William Galvin, however, stressed in an interview, "We had to remind some of our poll workers that even a president can't go inside and work a polling place."

Outside of the polling location at the Newton Free Library, in a suburb of Boston, Bill told voters "Pull the lever for Hillary!", the Boston Globe reports.

The Election Day Legal Summary on the Massachusetts secretary of state's website explicitly states that "solicitation of votes for or against, or any other form of promotion or opposition of, any person or political party" is illegal within 150 feet of polling places, the Boston Globe pointed out.

At another polling location in the Holy Name gymnasium in West Roxbury, the Clinton campaign's pool report reveals that Bill took photos with pro-Hillary voters, kissed a woman on her head and signed a voter's Hillary sign.

Inside the polling location, Bill shook hands with poll workers, and bought a cup of coffee from a bake sale.

A woman in the polling location asked Clinton for a photo. He replied, "As long as we're not violating any election laws."

According to Galvin, the Times reported, "the poll workers were flummoxed."

"We had to remind everybody what the rules are, that there is no campaigning within 150 feet of the voting booths because people are entitled to their privacy," the Massachusetts secretary of state explained.

Galvin said that, after Clinton staged the incident in the Newton polling location, he called Bill's next planned stop in order to remind poll workers of the law.

"He can go in, but he can't approach voters," Galvin told the Times. "We just took the extra precaution of telling them because this is not a usual occurrence. You don't usually get a president doing this."

Galvin's office did make it clear to the Boston Globe that Hillary Clinton's campaign had been clearly "notified" of the state rules, despite Bill's multiple visits inside polling places.

A petition started on Tuesday which calls for the arrest and prosecution of Bill Clinton for "violation of Massachusetts election laws" received 60,000 signatures in just 21 hours.