The New Jersey governor glimpsed the unknowable horror of Trump, while NASA set a record 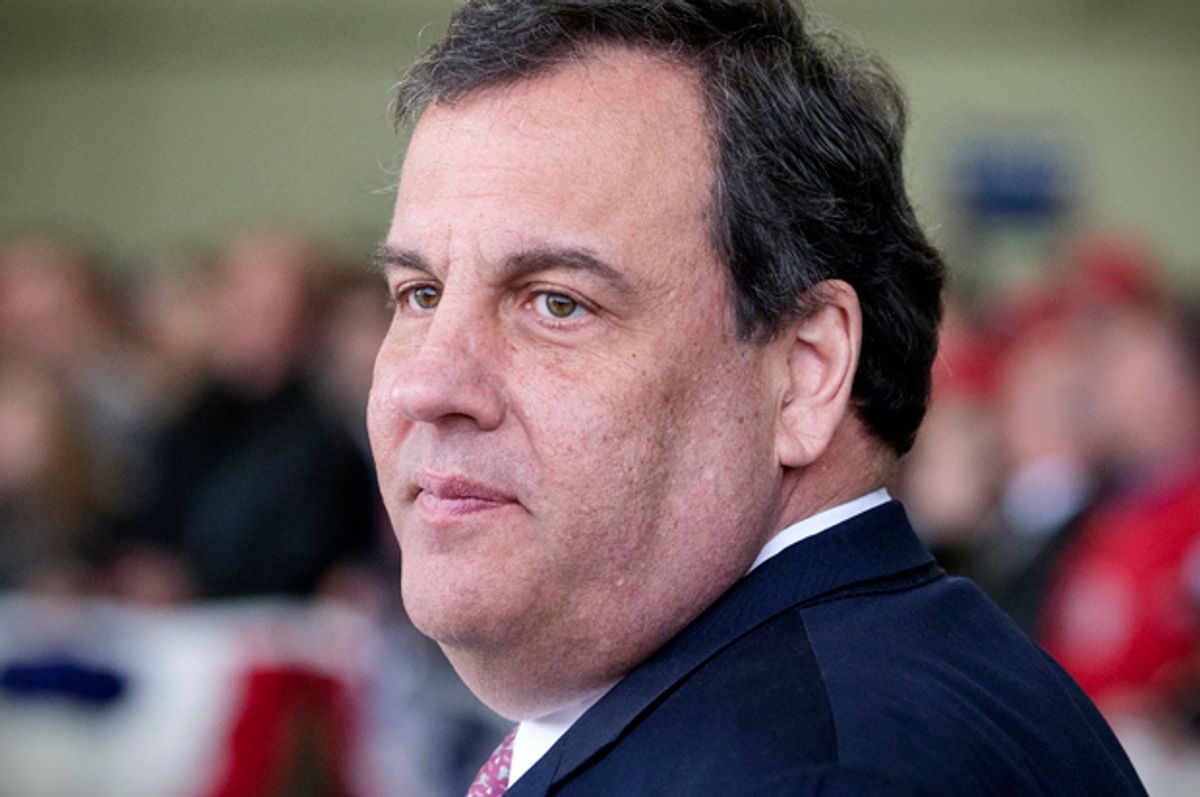 Last night on television, as Donald Trump congratulated himself on sweeping several states in the GOP primaries on Super Tuesday, Gov. Chris Christie appeared to be having a bad night of it. The New Jersey politician, who recently ended his own bid for the presidency and then became the first major national Republican elected official to endorse Trump, delivered an affectless introduction for the candidate and then stood behind him looking pained for the duration of Trump’s half-hour victory lap in Palm Beach, Florida.

It was a face that inspired speculation. Jim Newell at Slate hypothesized that Christie was in a “hostage situation.” Our own Scott Eric Kaufman called Christie’s speech the equivalent of a “human sad trombone.” And in an inspired piece at the Washington Post, Alexandra Petri argued that it was difficult to not conclude that Christie had “seen something” so horrible it cannot be expressed with mere words. “His were the eyes of a man who has gazed into the abyss, and the abyss gazed back, and then he endorsed the abyss,” she wrote.

There is much for Christie to mourn. Conservative columnist Jennifer Rudin, also at the Post, believes that the governor’s political career is ruined, calling him “an isolated, pathetic object of scorn.” And back home in New Jersey, six different local newspapers came together to call for Christie’s resignation. “We’re fed up with Gov. Chris Christie’s arrogance… we’re fed up with his opportunism. We’re fed up with his hypocrisy.” The joint editorial cited a fascinating and damning statistic: The governor spent 261 days last year out of his home state.

Eclipsed by the opportunistic vitriol of Super Tuesday was a human feat of existence, which was also covered on television, albeit in very short and pre-produced segments. Astronaut Scott Kelly landed back on Earth after spending 340 consecutive days in space, the longest of any American. (Several Russian cosmonauts have spent longer in space, going back as far as 1987. Making America Great Again starts, probably, with fostering more of the sincere curiosity and innovation that fuels NASA, but anyway, Trump is too busy selling that wall.) Given Christie’s attendance record in New Jersey, Scott Kelly might have made for an equally present governor.

Last night, the contrast between astronauts and politicians felt like a particularly sad commentary on America today, perhaps entirely because of what ended up being featured on television. Kelly’s landing took long hours throughout the afternoon and evening on the East Coast, landing in the Kazakhstan desert in a Russian Soyuz spacecraft accompanied by cosmonauts Mikhail Kornienko and Sergey Volkov. In an Einsteinian twist, Kelly was sent up as one-half of the study—his identical twin, fellow astronaut Mark Kelly, stayed on the ground. The goal of Scott Kelly’s long stay at the International Space Station was to study the effects of long-term space travel on the human body, so that NASA can study how to best get humans to Mars. The NASA press release also states, without a trace of irony, that the One-Year Mission’s investigations are intended to “benefit all of humanity.”

Astronauts describe a phenomenon called the Overview Effect when they are able to get far away enough from Earth to see a massive view of the planet. Apollo 14's Edgar Mitchell said, most famously, that “something happens to you out there.”

“You develop an instant global consciousness, a people orientation, an intense dissatisfaction with the state of the world, and a compulsion to do something about it.”

Kelly is no exception; he described a newfound environmentalism in the interviews he gave early this morning, in his first few hours back on the planet. Per CNN:

I feel more like an environmentalist since I've been up here," he said. "There are parts of the Earth that are covered with pollution all the time. I saw weather that was unexpected. Storms bigger than we've seen in the past. This is a human effect. This is not a natural phenomenon."

NASA broadcast Kelly’s return on live television, but on NASA TV, a network with extremely limited distribution. (Though it is technically open source; NASA TV will tell you the exact satellite that broadcasts NASA TV is AMC-18C. Until we all know how to uplink to satellites with the implants in our brain, NASA’s YouTube channel is probably your best bet.) In the meantime, Super Tuesday coverage ran on nearly every broadcast channel and cable news channel, unerringly finding the Trump angle and running with it, given how thoroughly he juices ratings. That candidate, and the entire election cycle, lacks any perspective whatsoever, Overview or otherwise. I know we have to watch the primaries, but I wish we could be watching space instead.

Certainly that’s where Chris Christie seemed to want to be. It’s too bad that the governor felt so bad about his life choices, when he chose to play the Smithers to Trump’s Mr. Burns for the foreseeable future. Maybe the glimpse of the back of Trump’s orange toupee was his own little Overview Effect, a sudden locking-in of perspective about fragility and authority and the sweeping meaninglessness of anything except empathy. Or maybe he, too, was thinking about Scott Kelly, and wondering now that he can’t be Trump, and he can’t go home, that he might be able to find some space on Mars.