"It's time for the Republicans to stop the Frankenstein they created": Harry Reid calls out his GOP colleagues for creating Trump 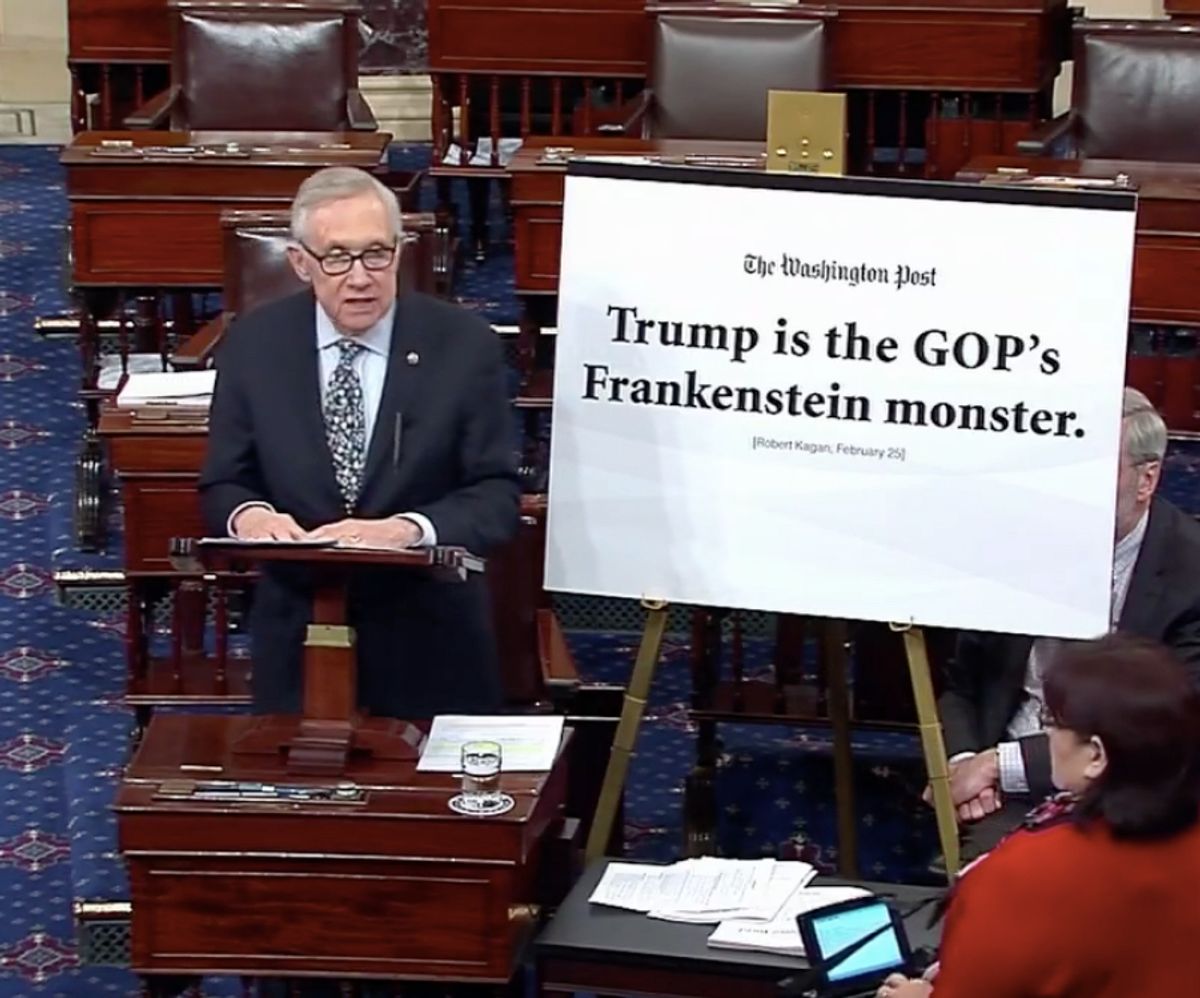 This week, House Speaker Paul Ryan and Senate Majority Leader Mitch McConnell were forced to publicly condemn the Klu Klux Klan after Republican presidential frontrunner Donald Trump faced widespread criticism for failing to early disavow an endorsement from David Duke. Now, following Trump's triumphant Super Tuesday showing, some Republican senators are openly declaring they will never vote for him. But Senator Harry Reid has a message to his panicking colleagues: Trump's your baby.

"Donald Trump is the standard-bearer for the Republican Party," the Senate Minority Leader said from the Senate floor Wednesday, taking Republicans to task for their opportunistic embrace of the uglier sides of the GOP base.

Reid appeared to revel in his skewering of his Republican colleagues, bringing up a prop to illustrate his point. “[H]ere is something that appeared in The Washington Post headlined ‘Trump is the GOP’s Frankenstein Monster,’" Reid said pointing to the blown up headline. "This was the headline in The Washington Post opinion piece offered by Robert Kagan, a former official of the Reagan State Department who is now a senior fellow at the Brookings Institute."

“Republicans spent the last eight years stoking fires of resentment and hatred building Trump piece by piece. Today, the Republican establishment acts like it’s surprised by Donald Trump and his victories around the country. They feign outrage that a demagogue spewing vile is somehow winning in a party that has spent years telling immigrants they’re not welcome in America. They act surprised Republican voters are flocking to a birther candidate, even as Republican congressional leaders continue to support a man who refuses to distance himself from the Ku Klux Klan.”

Reid continued: "They express shock and outrage that Republican voters cheer Trump's schoolyard taunts, even as they trounce the most common courtesies extended to every president — even as they deny a fair hearing to a president's Supreme Court nominee for the first time in history."

"Republicans shouldn't be surprised. They spent eight years laying the groundwork for the rise of Trump," Reid said. "It's time for Republicans to stop the Frankenstein they created."

"If Republicans fail to stop Donald Trump, he will tear their party apart."

Watch Reid take Republicans to task for Trump below, via CSPAN: