Marco Rubio is in denial: The establishment favorite insists his mounting losses are victories, while he pines for a contested convention

Rubio's strategy is to pretend he's winning until the convention, where he's hoping for a miracle nomination 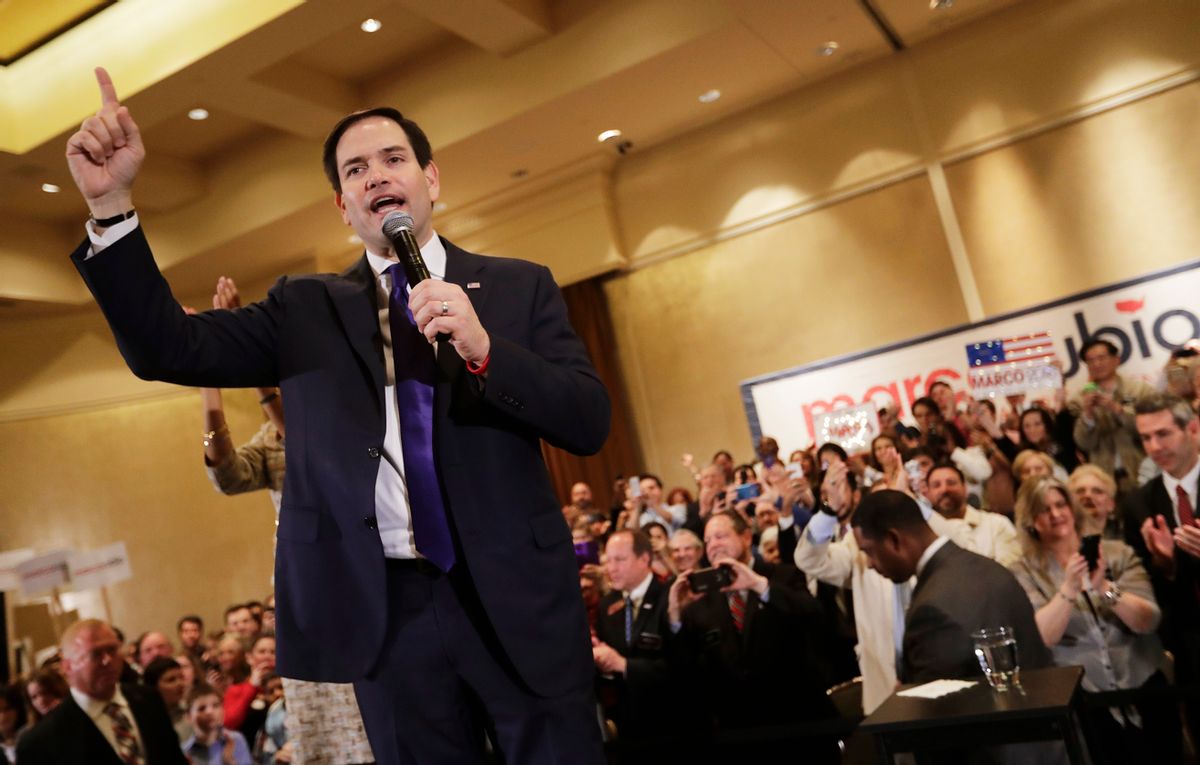 “We will leave tonight with a signficant number of delegates and with a trajectory to win this nomination.” - Marco Rubio

Cognitive dissonance is a powerful thing. When confronted with inconvenient facts, facts that contradict treasured beliefs, humans have a habit of suppressing them. It's how we maintain internal coherence, or simply carry on in the face of impossible odds. After Super Tuesday, Marco Rubio is demonstrating with unusual aplomb how effective cognitive dissonance can be.

Let's get the obvious out of the way: Rubio had a terrible day on Super Tuesday. On the biggest night of the election so far, in which a dozen states held primaries, Rubio won just one: Minnesota. In several other states a minimum threshold of 20 percent is needed to acquire any delegates at all, and it remains unclear whether he'll accomplish that.

Rubio is supposed to be the establishment favorite, the one candidate who can upend the Trump juggernaut. However, he's won only one primary so far, and he's lost repeatedly to Ted Cruz. The Republican donor class may love Rubio, but primary voters clearly don't. The delegate count thus far is damning: Trump leads the pack with 274, with Cruz at 149 and Rubio at 82.

To listen to Rubio is to listen to a man living in another universe, a bizarro world in which wins are losses and less is more. In an interview with Charlie Rose last night, conducted as the results were pouring in, Rubio insisted he's “competitive across the board in almost every state” and that “after tonight the map gets really friendly for us.”

I've no idea what Rubio is talking about here. In addition to having more delegates than he and Cruz combined, Trump has big leads in upcoming states, and there's no reason to suppose that will change. The establishment has won one of the fifteen primaries in this cycle; whatever Rubio is doing isn't working. For months he stayed out of the mud, preferring to repeat his pre-packaged platitudes over and over again. Then he decided to play rough, calling Trump a “con artist” and a trust fund baby. But that didn't work either: Trump's numbers seem to spike in every poll.

Even the most uncontestable facts remain unacknowledged by Rubio. Consider the following exchange between Rose and Rubio last night:

ROSE: “Despite all your campaigning, you are 20 points behind in your home state of Florida with only two weeks to go.”

Actually, it's every poll. According to Quinnipiac, Public Policy Polling, CBS, and the Florida Times-Union, Rubio is losing by an average of 20 points to Donald Trump in Florida. And it's been that way for several weeks.

It appears Rubio's strategy is continue pretending he's winning right up until the convention, at which point his best hope is for a meltdown scenario in which the party, somehow, hands him the nomination despite the fact that Trump will have earned the overwhelming majority of delegates. Rose asked Rubio bluntly if his approach was “to stay in the race and go to the convention and deny him [Trump] the nomination?” Rubio's answer was revealing: “Well, first of all, I'll do anything to deny him the nomination.”

Rubio continued: “This is delegate thing, and here's the bottom line: Donald Trump will never get to 1,237 delegates, which is what you need to be the nominee” If Trump doesn't have the required number of delegates by the time we reach the convention, he'll be the overwhelming leader. If Rubio is banking on the party denying Trump the nomination against the will of the voters, an abject disaster awaits the GOP. The blowback would be enormous, likely resulting in a mutiny among the base. The Republicans would surely lose in a landlside if that were to happen. On the other hand, with Trump at the top of the ticket, they'd still lose up and down the ballot. So perhaps Rubio isn't insane to threaten a contested convention.

In any case, one thing is for certain: Rubio, like much of the GOP, is in denial about the reality of Trump. And it's fascinating to watch, if nothing else.