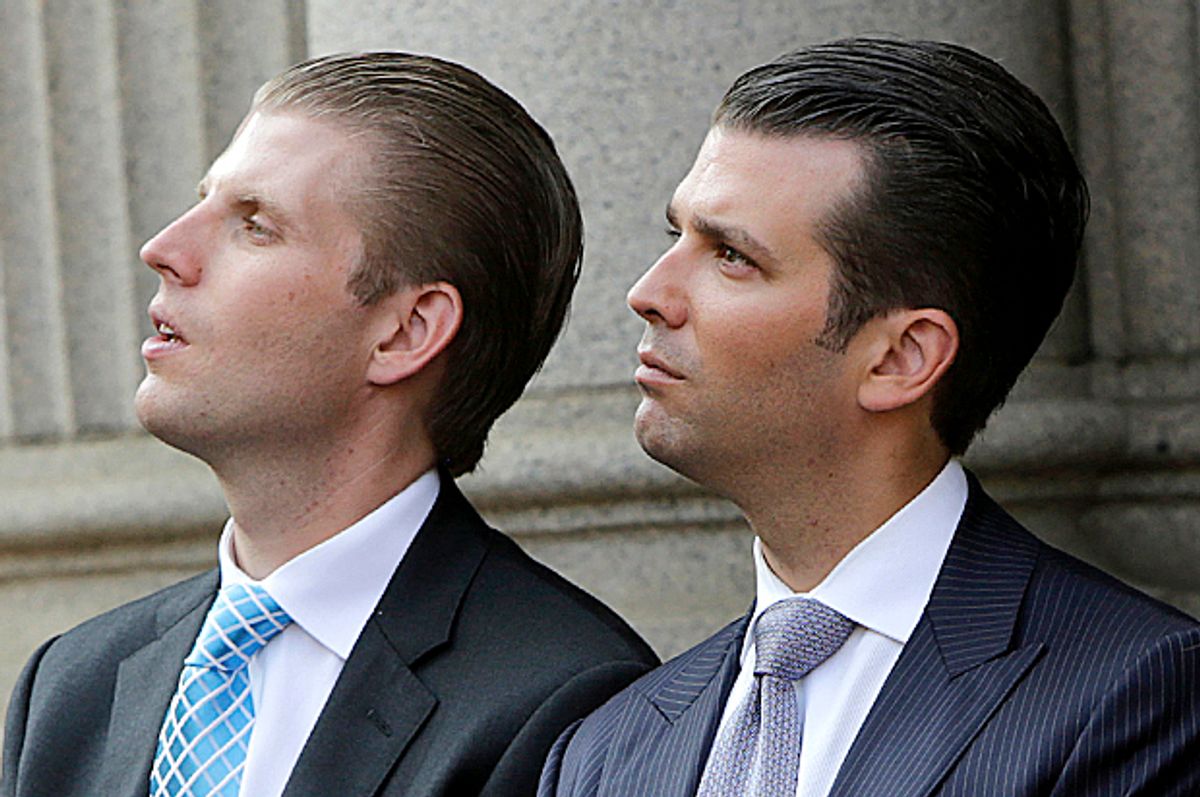 If you want insight into why Donald Trump, of all people, seems to have such great appeal to the conservative masses, the use of his two grown sons — and they are so alike that I had to double check that there are, in fact, two — as campaign surrogates tells quite a story.

Trump's weird hair, loud New York accent, and tendency to wear baseball caps has obscured, somewhat, the cultural understanding that he's the ur-prep, and was the standard-bearer for the popped collar crowd in the '80s. But one look at his sons, Eric and Donald Jr., and you are immediately reminded that yes, there really are some people who unironically believe country clubs are the best place in the world to be.

This all suggests that, for all the talk of "populism," one of the reasons that Trump's campaign is such a hit with rage-fueled, resentful and not just a little racist white people is that his nearly iconic wealthy white privilege, the kind that immediately marked a character as a villain in an 80s rom-com, is actually aspirational to huge swaths of Americans.

Trump's sons are such pitch-perfect preening preps that they read as unsubtle satire rather than real people. Both of them are dead ringers for Christian Bale's serial killer character in "American Psycho."  And while The Donald has a certain comic timing that makes his prep school bully routine funny, both of his sons are not so blessed, laying bare the grotesque soul rot that happens when mediocre white men have enough wealth and privilege that they're fooled into thinking they are actually something special.

In the past week, both Trump sons have made wretched fools of themselves in the media with the confidence that only comes from being rich so long that you have no one in your world who dares say no to you.

Donald Trump Jr. granted a 20-minute interview to a white supremacist named James Edwards, who believes that slavery is the "greatest thing to have ever happened" to black people and that "interracial sex is white genocide.". Trump Jr. is playing this off like he was sandbagged by some unknown who misrepresented himself, but as Gawker reports, Edwards was given press credentials by the Trump campaign, the same campaign that has repeatedly kicked reporters out of campaign events for espousing views that are seen as too liberal or too anti-racist.

"This is clearly the mainstream media trying to turn a story into something, much like they did with my father, who I witnessed denouncing David Duke and any KKK endorsement on multiple occasions," Trump Jr. said, dismissing the controversy.

Obviously, that's a load, because his father's little know-nothing routine when asked about it is fooling no one. This little tap-dance is the same thing: Cozying up to white supremacists and then pleading ignorance when called out for it. Either the Trumps are the unluckiest people in the world, or ignorance is simply a feint they use to get away with this.

But you can see why Trump followers would love this. Being able to contemptuously dismiss press questions about the KKK in the same tone one might arrogantly deny that you were groping the help or that the white powder in your Porsche is cocaine — i.e. like you know you have the money to get away with even the most obvious lies — must feel thrilling to the workaday Trump supporter. You can't get away with that crap at your day job, but you can live vicariously through these well-gelled men who live in ivory towers but share your same disdain for certain kinds of people.

Eric Trump has been hustling the same line. On CBS News, he contemptuously declared that confronting Trump about his little KKK game is "actually the worst part of politics" and that his father has seen "everything he's ever touched" turn "to gold."

On Fox News, same story: "My father's a great man" and "This is really politics at its ugliest."

It's gross, but, from a certain (and bigoted) point of view, it's also thrilling. These guys are living the fantasy, so rich and cased in privilege that they can do and say whatever they want, knowing that consequences bounce off them like Teflon. It's like watching a movie where the rich guy pays the hotel to make a dead prostitute disappear, except this time, the fantasy of being untouchable is real. Trump supporters can't live it, but they can vote it, and in that moment, share the dream.

It's not just on the racism front, either. After Buzzfeed combed through hours of audio clips of Donald Trump on the "Howard Stern Show" broing down with Stern by saying dehumanizing things about women, Donald Trump Jr. dismissed the entire thing with a flick of his Brooks Brothers's clad wrist on Fox News.

"He’s allowed to have a personality. He will," he haughtily explained.

Allowed. The word explains so much about the appeal of Trump and his crusade against "political correctness." Trump — and his sons — are living the dream of white guy assholes everywhere, of being allowed to be as repugnant, dismissive, misogynist, racist, and egotistical as you want, with the confidence that no one will say anything about it because you're rich.

Trump doesn't have to marry the girl next door who will some days have bags under her eyes and who thinks she has a right to her opinion because she has a job, too, you know. Trump gets to marry a supermodel whose skill at flattering the male ego is unequaled, as this quote from his book shows:

For years I would ask her whether or not I could run and win. And she would say, "Donald, people love you, but they wouldn't vote for you for president." When I asked her why, she said, "You're a little wild and a little too controversial. They respect you, they think you're really smart -- the smartest of all -- but enough people just wouldn't vote for you."

Trump and his sons are repulsive people, almost too good at playing the villainous preps that they, in fact, just are. But that act is selling better with the Republican base than Ted Cruz's "my clothes don't fit because I am down home kind of guy" act. People vote their aspirations, and it turns out, that for a lot of Republican voters, being a rich villain is exactly the fantasy they want to wallow in.