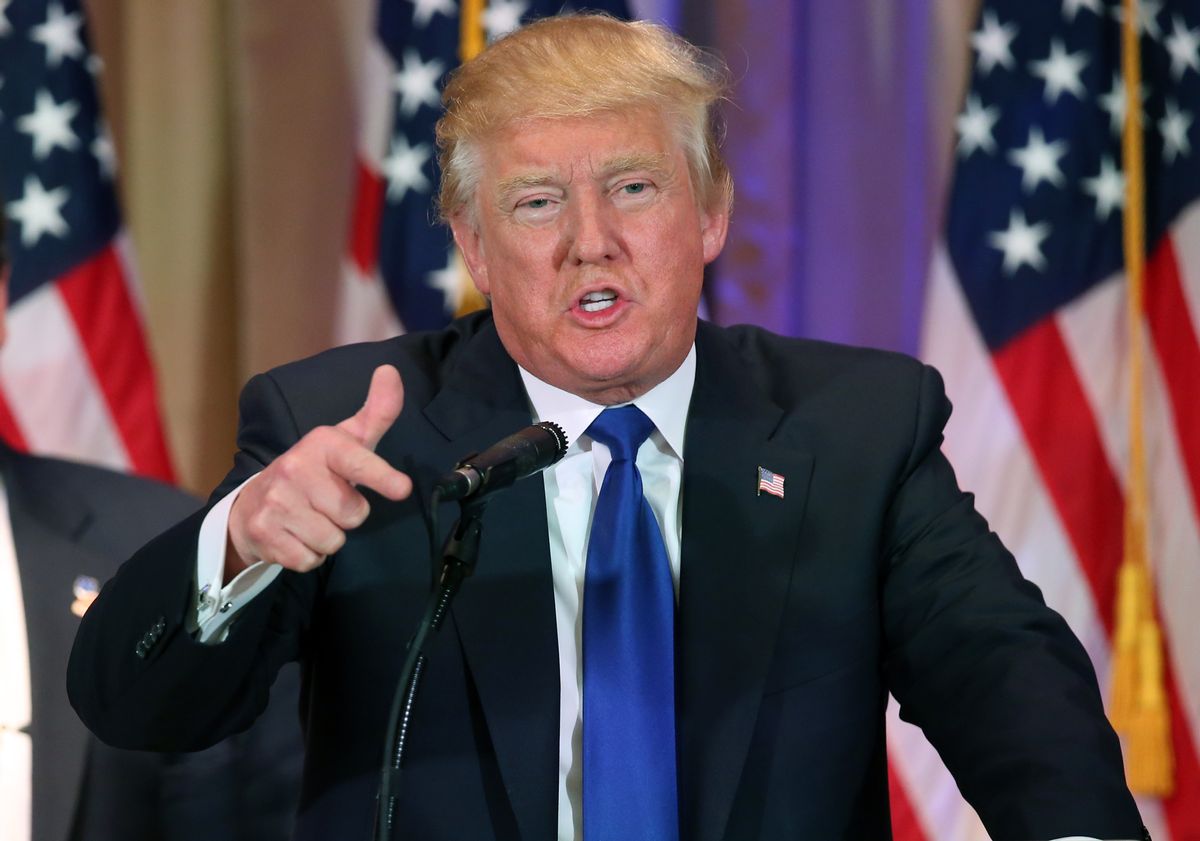 In this March 1, 2016, photo, Republican presidential candidate Donald Trump speaks on Super Tuesday primary election night at the White and Gold Ballroom at The Mar-A-Lago Club in Palm Beach, Fla. The possibility of Trump as Republican nominee _ and perhaps president _ is suddenly very real for the GOP in Congress. After months of denial that the billionaire businessman could swipe the nomination from more establishment candidates, senators faced reality on Wednesday. (AP Photo/Andrew Harnik) (AP)
--

It’s fun to watch the 2016 Republican presidential frontrunner pretend he gives a damn a policy. Donald Trump got lashed by Ted Cruz and Marco Rubio at the last Republican debate for the fact that he papers over his determined ignorance of policy issues with tough-sounding slogans that don’t actually mean anything. With another debate in the works for tonight, Trump is making a perfunctory effort to demonstrate that he actually does traffic in substance, which is why the Donald Trump “Healthcare Reform To Make America Great Again” plan was posted on his campaign website last night.

The “plan” isn’t really a plan so much as an indication that Donald Trump employs people who know how to copy-and-paste Republican healthcare talking points. All the old favorites are here. Repeal Obamacare? Check. Sell health insurance across state lines? Check. Health savings accounts? Check. Block-grant Medicaid? Check. The Trump plan to make American healthcare great is the same skeleton of a healthcare plan the Republicans in Congress have been kicking around for years. Certain parts of the plan even sound like they were cribbed from a Paul Ryan speech, like Trump’s argument that “the best social program has always been a job – and taking care of our economy will go a long way towards reducing our dependence on public health programs.” The only divergence from Republican orthodoxy, as Sahil Kapur notes, is that Trump endorses drug reimportation as a way to keep down prescription drug prices.

So now when Trump’s rivals accuse him of policy ignorance, he can shoot back that he wants to “reimport the drugs big-league” and “block-grant all the Medicaid” and “get a terrific deal on insurance.” Luckily for him, the “serious” candidates’ healthcare plans don’t go into much more detail than that either.

What’s most notable about Trump’s plan, though, is what it doesn’t say. Specifically, it does not address Trump’s oft-stated concern about “people dying in the street” because they don’t have access to healthcare. His pledge to prevent untimely street death is typically interpreted as a promise to use government resources in some way to provide a minimum level of basic health coverage for people who can't afford it. But Trump has never really spelled out what exactly he has in mind because, again, he doesn't care about policy.

Actually, the plan Trump has laid out would very likely increase the risk of some unfortunate low-income person falling deathly ill on the road. By repealing Obamacare, Trump would undo the Medicaid expansion that has opened up access to healthcare for millions of low-income people in 32 states and the District of Columbia. He wants to strip that coverage away and replace it with free-market pixie dust, which may be okay if you’re relatively healthy and can afford a stripped-down, barebones health plan. But if you have a preexisting condition – two words that do not appear in the Trumpcare plan – then you will more than likely be screwed and face a far higher likelihood of an ignominious street death.

As for people on traditional Medicaid, they’re also being put at risk of losing their coverage under the Trump healthcare vision. Block-granting Medicaid has long been a dream of conservative Republicans who, like Trump, insist that doing so will give states flexibility in administering the program. In truth, block-granting Medicaid amounts to a massive cut to the program’s funding, and it gives states the incentive and leeway to cap enrollment and turn down people who would otherwise be eligible for coverage. Previous proposals to block-grant the program would have, according to estimates, resulted in as many as 20 million people being booted from Medicaid over ten years.

The good news is that Trump’s plan says his various proposed reforms “are simply a place to start,” which leaves open the possibility that the street death problem will be addressed at a later date. But even if he does have something in mind to aid the sick and the poor, it will run at cross purposes with the rest of his plan, which goes a long way toward making their lives worse.