Blowing up the GOP to stop Trump: Republicans exploring plots to sabotage him at convention that could leave party in ruins

GOP has 2 options: Back a 3rd-party candidate, or play parliamentary games in Cleveland to thwart Trump's nominaion 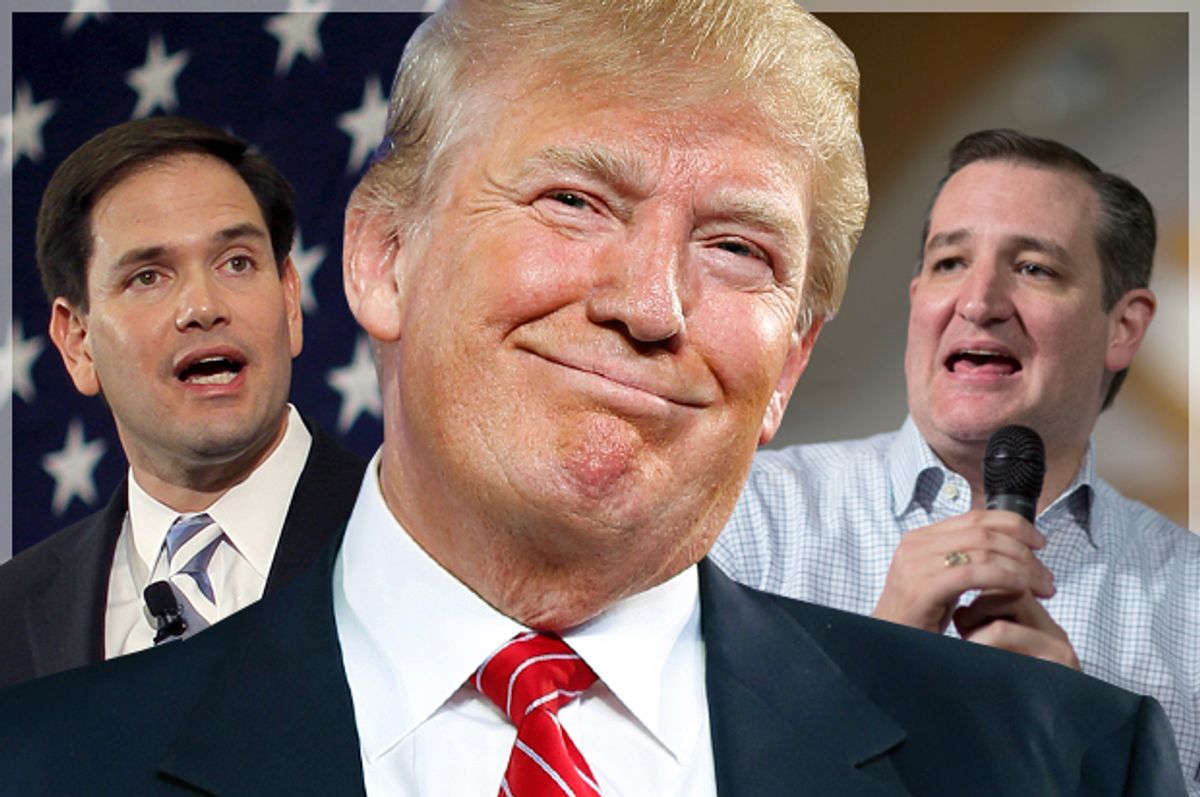 Republican insiders are scrambling to deny Donald Trump the nomination. Primary after primary, the Donald continues to dominate, piling up delegates along the way. One fashionable idea is to engineer a third-party option to peel away voters from Trump and give alienated Republicans an alternative choice. It's unlikely to have the intended effect (winning the White House in 2016), but the desire to stop Trump at all costs is understandable.

Every time Trump dog-whistles to his nativist base, as he did recently with his refusal to disavow David Duke, establishment conservatives cringe. His willingness to pander in this way has earned him the loyalty of proud bigots everywhere, but it will explode in his – and the party's face – in a general election. I suspect Trump knows this, but what matters a little collateral damage to an arsonist like him?

It's not just traditional Republicans that Trump has alienated. As the The New York Times notes, it's “mainstream Christian activists, who view his angry outlook as antithetical to their faith; centrists, who see him as the most divisive politician in a generation; and national security experts, who have recoiled from his praise for autocrats like Vladimir Putin.”

The question, though, is what to do about it? A third-party candidate, which was likely a last resort, has emerged as a real possibility. William Kristol, editor of the conservative Weekly Standard, has already stated his intention to put forward an “independent Republican” if Trump is indeed the nominee. “That ticket would simply be a one-time, emergency adjustment to the unfortunate circumstance (if it happens) of a Trump nomination,” Kristol wrote. It “would support other Republicans running for Congress and other offices, and would allow voters to correct the temporary mistake (if they make it) of nominating Trump.”

That statement is dripping with condescension. Kristol glides right past the obvious point: If Trump is elected, it won't be by mistake; it will be the deliberate result of a democratic process. Trump is the most popular figure in the Republican Party right now – in what sense is it a “mistake” if he's their chosen nominee?

In any event, Kristol isn't alone. The panic is spreading throughout the ranks of the GOP. They have but two realistic options: support a third-party candidate, who will undermine Trump but also hand the election to the Democratic nominee, or play parliamentary games in Cleveland in order to steal the nomination away from Trump. To do that, however, requires preventing Trump from acquiring the 1,237 delegates needed to secure the nomination. If they can manage that (for instance, by rallying around a candidate in time to limit Trump's delegate count), there are some intriguing possibilities.

MSNBC's Rachel Maddow interviewed Ben Ginsberg, a veteran Republican attorney, this week about the likelihood of a contested convention. Maddow asked Ginsberg if there is sufficient freedom under the rules of the Republican convention to nominate someone other than Trump, even if Trump has far more delegates than any other candidate going in. His answer was exciting, particularly if you're a Democrat:

“What's true about the Republican delegate selection process is that about three quarters of the delegates are chosen by state party conventions or state party central committees or executive committees and the candidate doesn't really have a say on who those individual delegates are. And secondly, under the rules of the Republican Party and its convention, the delegates are bound to the candidate who won their state for the first presidential ballot and in some instances more than that, but their bound for the presidential vote; they're not bound for things like decisions on rules, decisions on credentials, decisions on who the vice presidential nominee is – all of those things are up to the individual delegates working their will.”

The second half of that statement is the important part. What Ginsberg is saying, in effect, is that the rules can be changed at the convention in order to dethrone Trump, if it comes to that. It would be an outright affront to the will of Republican voters, but it's possible nevertheless. But even if party elites do cross that line, it by no means improves the GOP's chances of winning in 2016. It would permanently fracture the party and leave a subset of the base estranged from the process. And it's doubtful that someone like Cruz, who will likely be second in the delegate race, would be any more competitive in general election than Trump.

Despite the risks, Republicans are clearly exploring their options. Maddow asked Ginsberg if an effort to undermine Trump at the convention was already underway. His response should delight Democrats everywhere: “I believe it is such a big effort that it's being organized by campaigns as they go state to state...Honestly, Rachel, who are the leaders of the party right now who can command a group of delegates...This will be a battle among the candidates and their supporters.”

Buckle up, sports fans, this ought to be interesting.