Donald Trump is leading a political revolution in America, not Bernie Sanders — and that should terrify everyone

Trump's revolution is purposeless, but voter participation shows his campaign is where the momentum lies 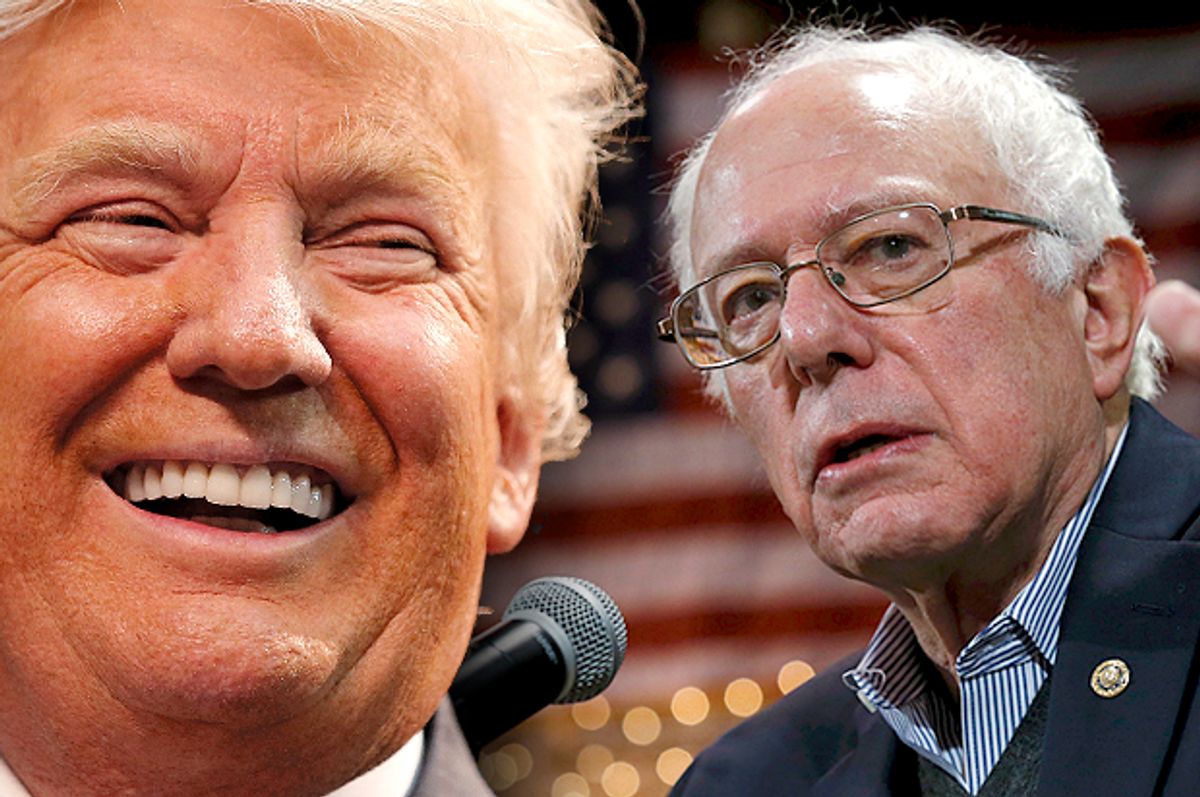 “Today we begin a political revolution to transform our country economically, politically, socially, and environmentally. Brothers and sisters, now is not the time for thinking small ... now is the time for millions of working families to come together.” -- Bernie Sanders

Revolution has been a recurring theme in Bernie Sanders' campaign. In a recent interview with MSNBC's Chris Matthews, he was pressed about the meaning of that term; specifically, Matthews wanted to know how Sanders intended to bring it about. The exchange is worth quoting in full:

MATTHEWS: Obama can't do this, but you can? How?

SANDERS: I'll tell you. What you need and what I say is you need a political revolution. And that is you need these young people to understand and working people and low income people, if they are not involved actively in the political process, it will be the billionaire class who makes decisions for them and not necessarily in their interest.

MATTHEWS: Let's say you get elected...and walk up to the Senate and you meet with leadership...and Mitch McConnell looks at you the way he looked at President Obama and says, “Forget about it.”

SANDERS: And then you know what I say? I'd day, “Hey, Mitch, take a look out the window. There's a million young people out there who don't want to be in debt for half their life for the crime of going to college...if you don't want to lose your job, you better start listening to what we have to say.” That's the point. That's how change takes place.

While Sanders may not be advocating a revolution in the strictest sense, he is trying to transform the landscape by bringing millions of new voters into the process. And he's absolutely right: No change of any consequence happens without mass mobilization. The problem, though, is that it's not working. The people aren't showing up.

Democratic turnout is down substantially from 2008. In South Carolina's Democratic primary, for example, only 367,000 people made it to the polls – a 30 percent drop from 2008. That year, much like this one, was a contested primary, and more than 530,000 Democrats turned out to vote. The numbers in Nevada tell a similar story. Eighty-four thousand Democrats caucused this year in Nevada, once again a 30 percent decrease from 2008. And this trend holds in Iowa and New Hampshire and in the Super Tuesday primaries.

The grim reality is that a revolution is happening right now, and it's being led by Donald Trump.

Again, the numbers tell the story. On the Republican side, turnout has been enormous. In South Carolina, 738,000 people went to the polls, a 20 percent increase from the last presidential election. Indeed, in the first four Republican contests, turnout records have been shattered. Turnout was up 14 percent in New Hampshire and 50 percent in Iowa. In Nevada, Trump alone received 34,000 votes – by contrast only 33,000 people voted in the entire 2012 caucuses.

If participation is the relevant metric, it's pretty clear where the momentum lies. There is doubtless a lot of energy on the Democratic side, but it's not translating into votes – and thus it doesn't really matter. People – particularly young people – aren't going to the polls. So long as that's true, Sanders' revolution dies in its embryonic stage, without having produced concrete results.

It's a terrible thing that Donald Trump has engendered such fervor on the right. Sanders' so-called revolution has discernible goals – campaign finance reform, Wall Street regulations, eliminating student debt, raising the minimum wage, ending for-profit prisons, and so on. Even if you don't think Sanders can accomplish those things in office, at least you know where he stands and what his campaign is about.

Trump's revolution is blind and purposeless, like his entire campaign. He's a tiny tyrant leading an army of discontents. His supporters are drunk on negation; they hate the establishment and want to make America great again, but they have no idea what that means, and Trump hasn't told them. Trump has no ideas and no one, especially Trump, has any clue what he'll do in office. And yet he's marshaled the rage of white America into a directionless or perhaps nebulously right-wing political movement.

What that movement will amount to remains a mystery (although present-day Europe offers a hint), but there's no question it's real and arguably unstoppable.