Don't blame the Google bus riders: The company "doesn’t look at the employees as any more human than it does the residents of San Francisco"

Salon speaks to Douglas Rushkoff about technology, the trouble with money, and our dangerous obsession with growth 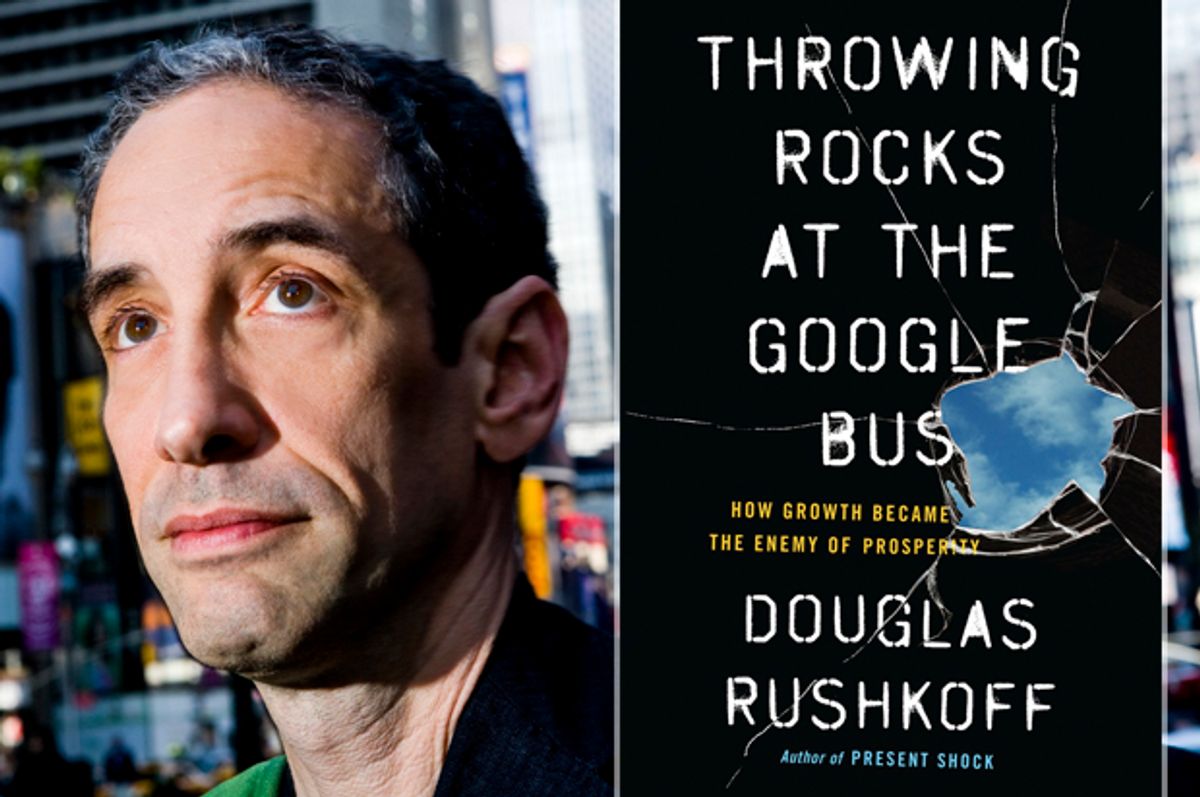 Douglas Rushkoff is a polymath who combines documentary filmmaking with an interest in the Middle Ages, suspicion of contemporary banking with a love of cyberpunk, and a fascination with technology with a deep skepticism toward some of the change it’s brought about. His restless mind has slowed down enough to write his new book “Throwing Rocks at the Google Bus,” which came out earlier this week.

Rushkoff’s book, subtitled “How Growth Became the Enemy of Prosperity,” is less inflexible than its title. It looks at the way an obsession with growth entangles us all, no matter where we sit on the digital web. “To use the metaphor of our era,” he writes, “we are running an extractive, growth-driven economic operating system that has reached the limits of its ability to serve anyone, rich or poor, human or corporate. Moreover, we’re running it on supercomputers and digital networks that accelerate and amplify all its effects. Growth is the single, uncontested, core command of the digital economy.” Sherry Turkle calls the book “a challenging and necessary read.”

He closes the book talking about “digital distributionism,” which includes things like crowdfunding, public commons, and collaborative wikis.

Rushkoff – who also teaches at Queens College, CUNY -- spoke to us from his home outside New York City. The interview has been lightly edited for clarity.

“Growth” is something that both liberals and conservatives tend to endorse. You see it as the root of some big problems – can you tell us why?

Growth associated with a business that’s getting bigger is not a problem. Joe opens a pizzeria, and more people want to buy pizza where he is, so he does an expansion. That’s growth that’s organic to demand for his product.

But growth as a goal is always going to be an aspect of capitalism: When you invest capital in something, you’re hoping that you’re going to get paid back more than you put in. But when growth is the only objective of your investment – when you don’t see the possibility of a long-term revenue return model -- you end up with a business landscape dominated by growth. That tends to be more extractive than generative.

And when you amplify that single core command throughout the entire digital economy, it gets very amplified very quickly.

In the startup community you’re not allowed to earn money – that makes your company look bad. I know a lot of startups that have revenue opportunities, but they turn them down, because they’re not allowed to show revenues on the books. Once they’re showing revenue, it’s as if they’re committed to a business model. What they can earn is no longer infinite. Now future rounds of investors can begin to calculate. You don’t want to look like you’re a business. You want to look like you’re establishing a platform monopoly simply so you can take over others.

Monopoly is an important idea in your book. But let’s talk about your title for a minute. You write, “Google workers are less the beneficiaries of an expanding company than they are its rapidly consumed resources.” What are you saying here?

Most of what I’m saying is that while I completely empathize with laying in front of a bus in order to draw attention to the company’s destruction of San Francisco as a livable place, I also feel for the people in that bus having rocks thrown at them. They’ve gotten out of school, worked however many years to try to get a friggin’ job at Google. And Google the corporation – or Alphabet, the holding company – doesn’t look at the employees as any more human than it does the residents of San Francisco. That these are just the people who are lucky enough to get on the bus, to make six figures a year for three or four years until they burn out, and then they’re done… It’s a tremendous amount of pressure – and I’m sure it’s been algorithmically calculated to get the most value out of them given the turnover and the ability to get new ones.

You look up to the CEO of [tech companies], and they’re answering to shareholders, and the shareholders – maybe this reveals my class – are people like me. I’ve got a retirement plan through the university I teach at. And I’m sure they have Google in their S&P fund. So who’s to blame?

Your point is that it’s a system and not a few evil people. A system that creates chaos for all involved.

It’s sort of the same argument people are making about racism. You don’t have to be a racist – we have systemic institutional racism.

It’s not like there’s some evil capitalist – although there are – but they don’t know it. You talk to any of the guys in VC, they’re doing this rapacious venture capitalism at the same time they have a goatshare and support community supported agriculture and Mars missions for the environment. It’s more about our participation in a system that is eroding our physical and social reality. But it’s so embedded in the way we think…

I talk to business people and bankers and economists all the time, who are like, “Wait a minute, without growth, the middle class can’t keep up with inflation!” So inflation is a principle of nature? Is that what you’re saying?

Speaking of money, you say something is deeply wrong with our currency system, and you hope we can revive local currencies.

I’m hoping we can revive local and other complements to the interest-based central currency.

What’s wrong with our currency and banking system?

Where to start! The reason it was created is to allow people with money to make money simply by lending out money. There were long-distance currencies as far back as ancient Egypt, and the Roman empire… But those ended up hoarded. So they invented market money…

So the problem with central currency and banking is that is exists at the exclusion of all other systems. So that when Wal-Mart can get money cheaper than you and I can, they end up with an unfair developmental advantage. In order for people on the periphery to trade with each other, if they need this single form of cash, it’s really tricky.

You’re saying the money system gets in the way of small-scale people cooperating.

I don’t think we can accelerate our rate of growth as fast as we do, and I think it’s ass backwards for our economic health to be dependent on growth rather than growth be a happy by-product of economic activity.

We’re getting into “The Big Short” territory here… That movie does a great job at explaining economics to a “lay” audience.

The weird thing is, it’s not just the lay audience who needs to be educated on this. The premise of the book is that Evan Williams and Jack Dorsey and all these kids made a mistake when they went public with their companies, particularly so early… They ended up chained to a system that will end up destroying their companies.

I keep coming back to this – [Twitter’s] $500 million return, for 140 characters, is such a massive return! Under my old slacker Gen X standards, that would be an obscene amount of money to have gotten for something so simple. And on Wall Street it’s seen as a failure, and they have to pivot into something more profitable than $2 billion a year.

Yeah it seems like a runaway train when $2 billion isn’t enough...

Let’s talk about the power of monopoly in the digital age.

Amazon took over publishing at a loss! And it’s not just because they hate publishers or don’t like writers. They don’t care!

It’s a business model. Once they have full control of a vertical, they can hop over and begin to take over others.

You end by talking about “digital distributionism.” You call it an improvement over the digital life we’ve been living.

So I looked at philosophy and tried to find people who are consonant with this idea, and duh, it turned out to be [Marshall] McLuhan. I’m a media theorist, so it was like, “Daddy!”

McLuhan was all into this idea called distributionism, which [G.K.] Chesterton and [Hilaire} Belloc were writing about, and they got it from the Pope [Pius XI]. And it’s funny – Pope Francis has been using the same language.

Everybody wanted to the Catholic church to weigh in on Marxism vs. Catholicism and who’s right. And they basically said, “They’re both right – people should be able to get rich. But workers should own the means of production.” So they were really asking for what they thought King Henry VIII screwed up, at the beginning of the [Reformation].

They liked the idea of a community maintained commons, and thought companies should only grow as big as they needed to grow in order to accomplish their purpose – that growth for growth sake should not be allowed. So they were really espousing an almost anarcho-syndicalist idea on the economy.

It could look like small businesses owning their own printing presses and ovens – these cottage-industry things becoming popular in the digital age. And I’d argue, not just some coastal, creative-class thing but as a culture-wide, NASCAR, Martha Stewart, craft/knitting/farming… I think it’s much broader than Ithaca.

Or, on the larger scale, it’s these companies that go out of business and then sell themselves to their workers. Or companies like WinCo, which is bringing down Wal-Mart out West by paying their workers more. And their advantage is they don’t have to pay shareholders. So they end up working so much more efficiently…. Instead of cutting our environmental standards, what if we just cut the investors out?

Has your point of view on digital technology changed?

I’ve always been profoundly optimistic on the possibilities of a digital-media environment. I’ve never been particularly enamored of the tools themselves. But the states of mind, and the possibilities that these kinds of technologies inspire in us… A network of agriculture farms, of people making things in their homes, is to me digitally inspired.

I’m not a digital solutionist. I don’t think we need Bitcoin. But I think Bitcoin helps people see the artificial centrality of the authorities we currently use to conduct our negotiations.

At the very beginning, in [his book] “Cyberia,” I said, I feel like The Internet is more like training wheels, giving us examples of how human beings can operate with each other. More than it is the tool that’s going to take care of it for us.

And that’s where we are now…?

Yeah – but if anything, so far, I’d say that digital technology has not led to a more distributed economic reality.

So far it’s exacerbated [the worst aspects of capitalism]. But I’m hoping we’re at an inflection point now.