How Donald Trump blindsided the GOP: Inside the uprising the establishment never imagined -- and didn't see coming

GOP leaders thought they controlled their voters, and usual "dog whistles" would bring them home. Not this year 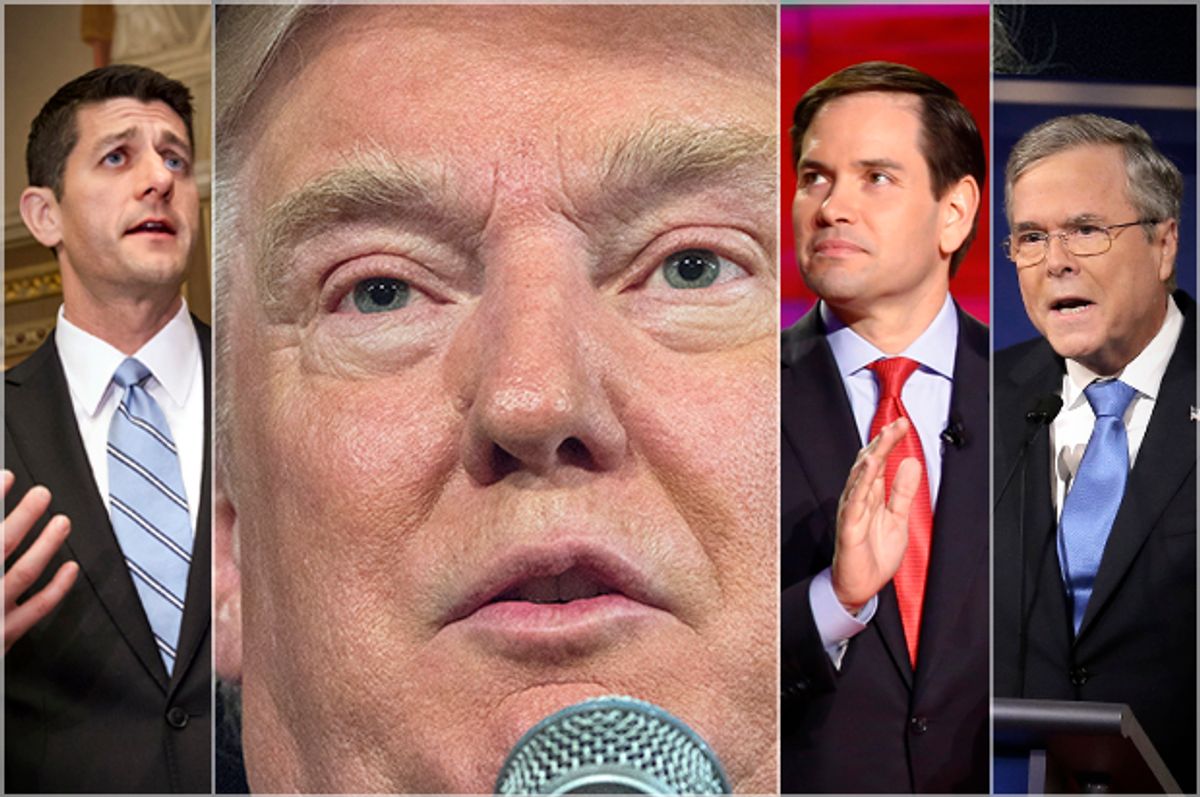 Why has Donald Trump’s appeal come to be so different than that of the Republican Party and its longer-term leaders? The complex answer rests on the paucity of ideas and leadership skills on the part of the rest of the dwindling field of Republican presidential candidates—but it also includes a failure on the part of party leaders and pundits to understand the people they thought they were leading. They have equated past electoral support with philosophical alignment. We are seeing, through Trump, that the connection between the two, always tenuous, is easily severed.

One of the reasons the Republican elite has dealt so ineffectively with Trump is that it has never understood that they don’t control the masses who have voted for them, believing that its "dog whistles" could always bring the straying back into line. The forces that they have ridden to power, however, are much stronger than they imagined—and quite different from what they thought they were so deftly manipulating.

Their lack of understanding of their "base" can be seen in Charles Murray’s 2012 book "Coming Apart: The State of White America, 1960-2010." Clueless to the extent that cultural background influences people and, like so many of today’s elite, believing in an American meritocracy, Murray asserts that the “trends I describe exist independently of ethnic heritage.” This points to a major blind spot of the soon-to-be former leaders of the Republican Party. The irony is that they use ethnic division to attract votes though they have long believed, with Murray (and with contradiction notwithstanding), that the successful in America rise through their individual worth, not their backgrounds. Everyone, the elite believe (at least the Republican elite), wants to join them. They even believe that one’s cultural orientation (ethnic, class and more) has become a personal choice.

So obtuse are they that it is no wonder that "The Rise of Trump"™ blindsided them.

Murray applauds what he describes as a new class structure in America led by “a small subset: the people who run the nation’s economic, political, and cultural institutions.” This imagined pyramid of power unintentionally outlines the difference in theory and practice for the Republican elite—and explains just why they have been paralyzed by the presence of an actor within their ranks who comes from the top but does not share the illusions of the elite. Theirs is, as a result, an example of paralyzing cognitive dissonance.

By claiming that people are successful by their own merits, the Republicans have elided "above the line" consideration of why certain groups of people are not as successful as others … and so, of necessity, have also ignored the fact that not everyone can “make it.” Safe in their imagined meritocracy, they ignore the role luck has played in their climbs to the top, leaving their less fortunate followers searching for someone or something to blame for their own lack of elite status. Teachers are blamed for the failures of their students, immigrants are responsible for unemployment among the native-born, and welfare cheats are keeping taxes high. Someone else is always getting the break, the less fortunate come to believe. Deserved legacies of success are being stolen away.

As most anyone from any cultural background knows, the isolation of the very rich from everyone except others of their economic status and the people who serve them has a very long tradition in America as elsewhere in the world. Walled estates and patrolled neighborhoods have been standard for eons. Yet, as if the situation of today’s meritocracy were something new or different, Murray writes that

Many of the members of the new upper class are balkanized. Furthermore, their ignorance about other Americans is more problematic than the ignorance of other Americans about them. It is not a problem if truck drivers cannot empathize with the priorities of Yale professors. It is a problem if Yale professors, or producers of network news programs, or CEOs of great corporations, or presidential advisers cannot empathize with the priorities of truck drivers.

Actually, this is a problem both ways. When the truck driver does not also understand the priorities of Yale professors, a dialogue between the two can never be established. Murray has unwittingly bought into one of the reasons for the resentments of “red state” conservatives toward the “East Coast elite,” that the elite need knowledge while the rest do not. This is the problem liberals such as John Dewey were trying to address through creation of a system of education based on the concept of the citizen as informed decision maker and that conservatives such as Walter Lippmann resisted, believing the population best served by an informed elite crafting choices for the population as a whole.

That the divide between the professor and the teamster has been in existence since the early years of English colonization of America should be apparent to anyone who has made even the briefest study of the history of American culture. Murray does try to base his vision of the “new lower class” in history, but it is a history that takes as truth the myth of “industriousness, honesty, marriage, and religiosity” as the basic aspects of American culture. This has not really been the case at all. Murray taps into other long-term myths, claiming that early “Americans may not have been genteel, but, as a people, they met the requirements of virtue.” This sort of self-congratulatory vision of history is common to the myths within any culture or ethnic group. Unfortunately, it also can lead to resentments, to feelings that virtues unrewarded are actually cases of rewards stolen by the undeserving. It also can lead to Donald Trump’s "Make America Great Again" and destruction of an elite in the Republican Party that neither understands—nor is understood by—its supporters.

By the time of the 2012 Republican National Convention with its catchphrase of “We Built It,” the myth of an American individualism that led to a meritorious elite of "builders" had become the basis for a successful cult that could now explicitly show its political muscle. The “Tea Party,” the major manifestation of this new cult of individualism, however, is much more than a simple political movement. It is a reflection of that cultural belief that “outside” forces have conspired to dampen individual initiative, that if people could only be left alone, they could work miracles for themselves. Its attitudes are those behind the mania for guns that grew so strong over the first decade of the 21st century, stronger than it had ever been in American history. Guns, it is imagined, can keep at bay those who would keep one down. And there is a belief, a cultural conspiracy theory, if you will, that there are such enemies. Trump plays on this more directly than do the Republican leaders he is on the verge of superseding. They, in order to keep up their imaginary view of their own worth, hid their pandering to the worst instincts of Americans. Trump, with no such illusions, does not.

Without any sort of real philosophical underpinning, the new individualism reflects the sort of inchoate yearning that crosses political boundaries and that Donald Trump, of course, has tapped into so well. His followers aren’t conservatives, not as the Republican elite define the term (supporting lower taxes for the rich, smaller government, etc.), but are people who believe their legacy has been stolen, that their failure to also make it into the elite is the fault of forces well outside of their own lives. They aren’t even Republicans, except by convenience.

And, now, by usurpation.

This article is adapted from passages in Chapter Six of Aaron Barlow’s book "The Cult of Individualism: A History of an Enduring American Myth" (Praeger, 2013).