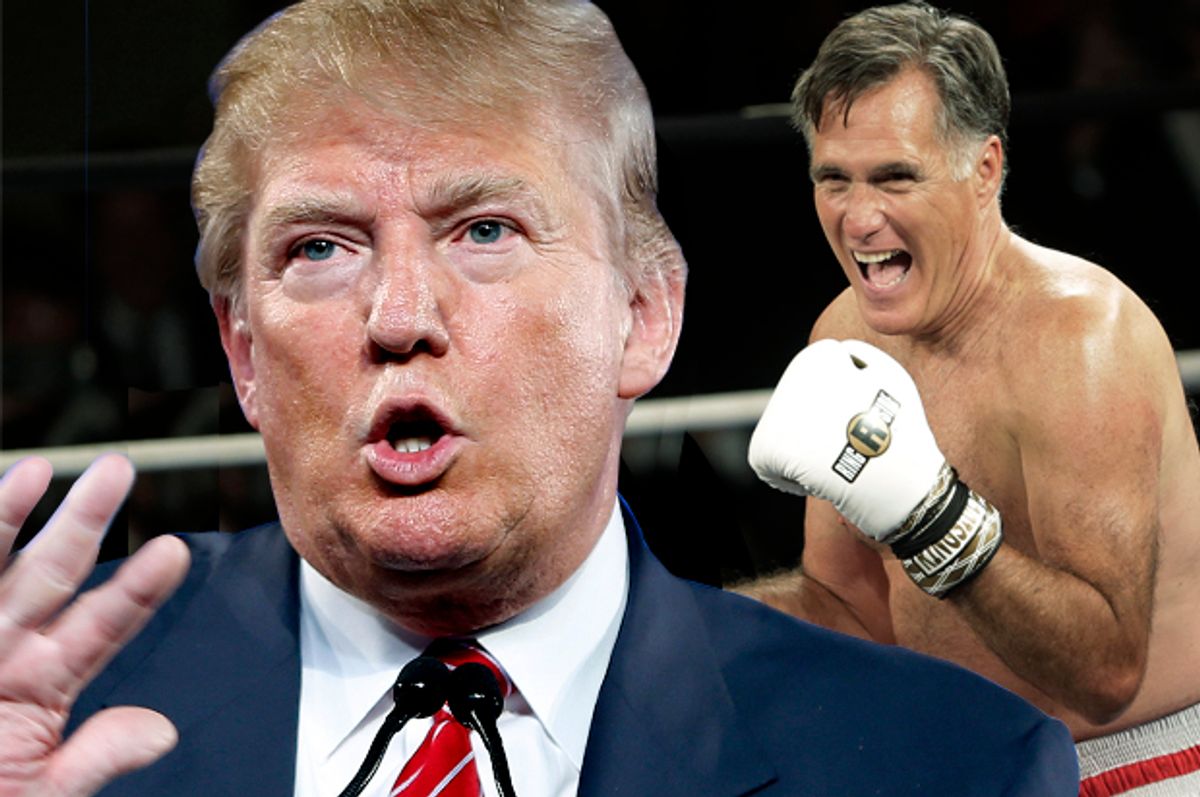 Mitt Romney inserted himself into the presidential campaign today. Like most establishment Republicans, Romney is panicking as the reality of a Trump-led GOP becomes impossible to ignore. On Thursday, the former Republican nominee let loose a string of attacks on Trump, doing his very best to feign outrage and urgency.

“Let me put it plainly,” Romney said, “if we Republicans choose Donald Trump as our nominee, the prospects for a safe and prosperous future are greatly diminished.” After poking holes in Trump's economic proposals, Romney continued: “But wait, you say, isn't he a huge business success that knows what he's talking about? No he isn't. His bankruptcies have crushed small business and the men and women who worked for them. He inherited his business, he didn't create it. And what ever happened to Trump airlines? How about Trump University? And then there's Trump Magazine and Trump Vodka and Trump Steaks, and Trump Mortgage? A business genius he is not.”

Harsh words indeed. Romney then conceded that Trump is already poised to win, but offered a solution: “The rules of political history have pretty much all been shredded during this campaign. If the other candidates can find common ground, I believe we can nominate a person who can win the general election and who will represent the values and policies of conservatism. Given the current delegate selection process, this means that I would vote for Marco Rubio in Florida, for John Kasich in Ohio, and for Ted Cruz or whichever one of the other two contenders has the best chance of beating Trump in a given state.”

Not content to leave it there, Romney then went after Trump's character. “After all,” he said, “this is an individual who mocked a disabled reporter, who attributed a reporter's questions to her menstrual cycle, who mocked a brilliant rival who happened to be a woman due to her appearance, who bragged about his marital affairs, and who laces his public speeches with vulgarity.”

The former Republican nominee closed his remarks with an admittedly powerful rebuke, one that will resonate with moderate Americans: “Mr. Trump is directing our anger for less than noble purposes. He creates scapegoats of Muslims and Mexican immigrants, he calls for the use of torture for killing the innocent children and family members of terrorists. He cheers assaults on protesters. He applauds the prospect of twisting the Constitution to limit first amendment freedom of the press. This is the very brand of anger that has led other nations into the abyss.”

The problem with Romney's rejection of Trump is that it can't be believed. The whole spectacle smacks of desperation. Here's a guy the establishment thinks is credible, and so they trot him out before the cameras to deliver their anti-Trump message. It's not a terrible idea. Romney is a serious person with an air of dignitiy that shimmers in comparison to the current crop of GOP candidates.

But he's the wrong messenger.

As the opening quote suggests, Romney is a hypocrite. He happily accepted Trump's endorsement in 2012, and what he had to say then doesn't square with what he said today. For instance, all that noise about Trump not being a business genius – in 2012 Romney said “I spent my life in the private sector, not quite as successful as this guy [Trump], but successful nonetheless.” True, that could be dismissed as trivial banter, an empty gesture.

But then Romney said this: “Donald Trump has shown an extraordinary ability to understand how our economy works, to create jobs for the American people...He's done it here in Nevada, he's done it across the country...I wanna say thank you to Donald Trump for his endorsement; it means a great deal to me to have the endorsement of Mr. Trump.”

These words perfectly contradict the core of Romney's message today. Either he was lying in 2012 or he's lying now. In any event, he's not believable, and everything he said, even the true parts, falls flat because of his past remarks. What he did today was a last-ditch effort to slow Trump's momentum, and no one, especially Trump supporters, will take it seriously.