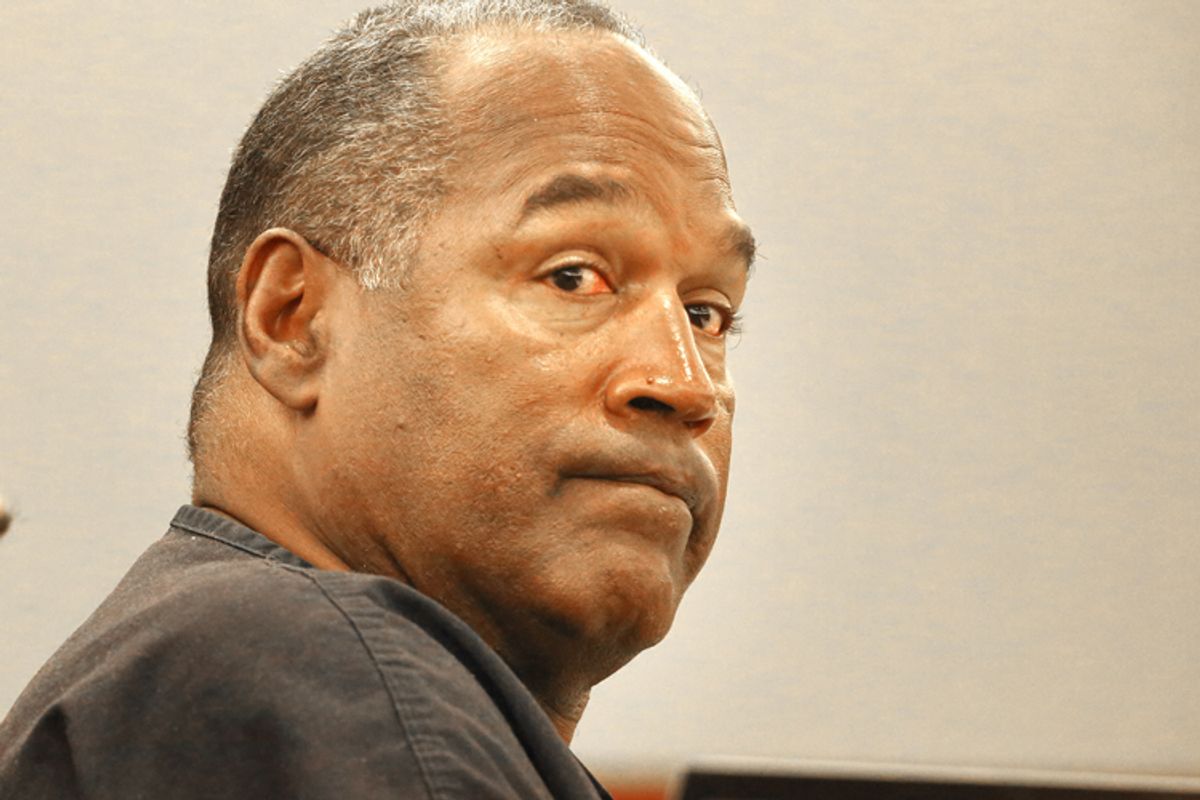 O.J. Simpson sits during an evidentiary hearing in Clark County District Court on Thursday, May 16, 2013 in Las Vegas. Simpson, who is currently serving a nine-to-33-year sentence in state prison as a result of his October 2008 conviction for armed robbery and kidnapping charges, is using a writ of habeas corpus, to seek a new trial, claiming he had such bad representation that his conviction should be reversed. (AP Photo/Las Vegas Review-Journal, Jeff Scheid, Pool) (Jeff Scheid)
--

The long, strange O.J. Simpson murder saga just keeps getting longer and stranger. The LAPD confirmed in a Friday news conference that a knife said to have been recovered from Simpson's former estate is in police possession and is undergoing forensic examination as evidence.

Captain Andy Neiman said the LAPD became aware of the knife "within the past month" and confirmed TMZ's initial report that police acquired the knife from a retired LAPD officer. Neiman said that it is unclear whether the former motor officer was retired at the time he came into custody of the knife.

While it's a surprise that new evidence would turn up now — 20 years after the Simpson murder trial and in the midst of an FX miniseries on the case — what's even more shocking is the tale of how the knife reportedly wound up in LAPD custody. According to TMZ, "years ago" a construction worker found the knife buried on the perimeter of Simpson's former estate and brought the knife to a police officer on the street. Then, says TMZ, things got weird:

Turns out the cop — who worked in the traffic division — was off duty at the time, working security for a movie shoot at a house across the street on Rockingham. Our sources say the officer took the knife home and kept it ... kept it for years.

In late January of this year, after the cop retired from the LAPD, he contacted a friend who worked in LAPD's Robbery Homicide Division (RHD). The cop told the friend about the knife and said he was getting it framed to put on his wall. He wanted his friend to get the DR (Departmental Record) number for the Nicole Brown Simpson/Ronald Goldman murder case, which he planned on engraving in the frame.

We're told the friend was indignant, and told his superiors. The brass was outraged and demanded that the retired cop turn the knife over, which he did.

So for those keeping score at home, TMZ says that an off-duty LAPD officer kept a potential murder weapon "for years" as a souvenir. The report is vague as to when the knife was found, saying that it could have happened at any time from 1998 to "several years ago." The LAPD says it is still vetting accounts of how the knife came into the possession of the retired officer.

Famously, the weapon used to murder Nicole Brown Simpson and Ron Goldman was never found during the investigation. Simpson's defense rested heavily on allegations of police misconduct and mishandling of evidence, and he was acquitted of the murder charges in criminal court in 1995. Simpson is currently imprisoned in Nevada on unrelated armed robbery and kidnapping charges.

The knife, which TMZ reported "could have blood residue on it," is now undergoing forensic testing by the LAPD for hair, fingerprints and DNA. Though the case is still considered open, the double jeopardy clause of the Fifth Amendment protects Simpson from being tried for the murders again.