Debunking the big lie about Trump and the GOP establishment: They're identical and hocking the same brand of bullsh*t

Trump is successful because he's just as bigoted as other Republicans, but just less hypocritical about it 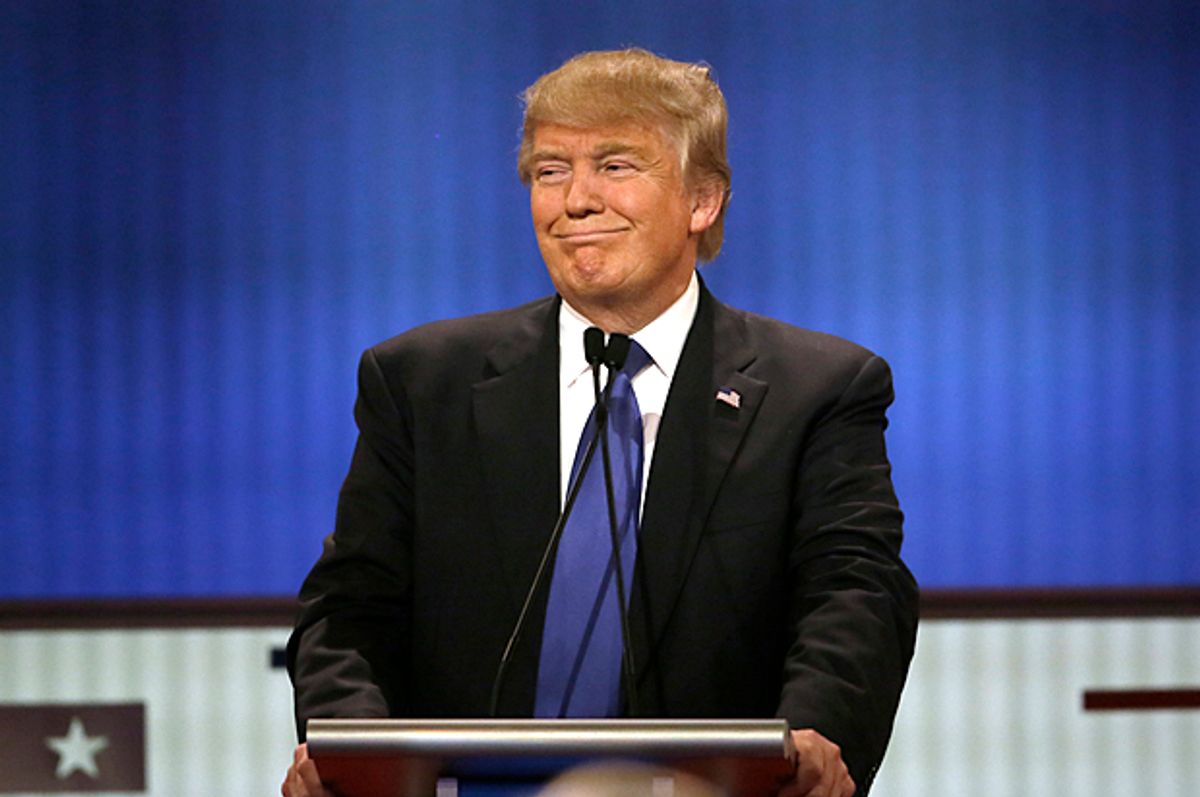 Despite some panicked claims otherwise, Donald Trump is not an evil genius. What this week showed, between Mitt Romney's hypocritical anti-Trump speech and the ridiculous Fox News debate in Michigan, is that the Republican establishment has a few easily identified vulnerabilities that any charlatan with enough bombast and access to media could exploit. Trump, and this appears to be the theme of his entire life, just got lucky to be the right narcissist with the right connections and the right money at the right time.

That vulnerability, at its core, is hypocrisy. For decades, Republicans have positioned themselves as the backlash party, the people who will do everything in their power to stop and ideally reverse gains made by people of color, women, and LGBT people, all while running around in the media denying they hold any animosity towards the liberal ideals of equality and fairness. It's been an incredibly effective campaign strategy, because it turned out that the majority of white people and men will repeatedly vote for a party that screws them over economically so long as they stick it harder to the other guy.

These voters have long understood and accepted the hypocrisy of the Republican Party. They understand why politicians need to pretend to support racial equality while undermining the economic and social rights of people of color. They understood why you can't just openly say you want women back in the kitchen, even as you fight to destroy the rights that help women get out. But that kind of game really wears thin on people's nerves and so really, it shouldn't be a big surprise that Trump, who clearly enjoys crossing the line and saying all those things you're not supposed to say, would be killing with conservatives voters.

But what this week showed is that the Republican addiction to hypocrisy won't be so easily defeated. Even though Trump has shown for months and months that taking umbrage at his antics only endears him more to conservative voters, for some reason, establishment Republicans decided the way to kill him off was to apply even more hypocritical umbrage. But voters will continue to see right through this posturing, because, at the end of the day, the only real difference between Trump and his Republican opponents is that he takes a blunter tone about things.

This was made clear by the whole embarrassing Mitt Romney debacle. Romney got on his high horse, sneering about Trump's tax plan and his health care plan and his misogyny and his racism, even though it took only a few minutes of googling to show that Romney's own positions in his 2012 campaign on these issues were basically the same, and more extreme in some circumstances.

But forget all that wonky stuff. Trump was able to zero in an even more obvious hypocrisy.

Why did Mitt Romney BEG me for my endorsement four years ago?

When you see stuff like this, it's easy to see why Trump is able to engender so much love with certain kinds of conservatives. The party does treat a certain set of Republican voters like they're that ugly girl you'll dial up for a booty call but would never dare bring as a date to a party: The birthers, the people who think Ann Coulter is smart, the people who really love "Duck Dynasty." Romney's acting like he's too good for the likes of Trump, and Trump is reminding everyone he was singing a different tune Thursday night.

It's not just Trump supporters who are noticing this, either. Stephen Colbert called out the hypocrisy. Matt Lauer confronted Romney about this, and Romney admitted, "I was welcoming his endorsement," but added, "there are a lot of folks who endorsed me I would not want to see as president."

Way to feed Trump's narrative that Republicans are happy to use their conservative base to gain power, but when it comes time to return the favor, the establishment is going to act like they don't know you.

"So Republicans are going to nominate a candidate who talks complete nonsense on domestic policy; who believes that foreign policy can be conducted via bullying and belligerence; who cynically exploits racial and ethnic hatred for political gain," Paul Krugman writes in Friday's New York Times. "But that was always going to happen, however the primary season turned out." He goes on to point out that the entire Republican field is devoted to the same bigoted policies as Trump. The only reason to oppose Trump is, at the end of the day, because the Republicans would prefer someone who has more loyalty to the party in office, because they think they can control him better.

If you watched Thursday's debate, this much was obvious. For all the #NeverTrump histrionics on display, what was made clear, once again, is that Rubio and Cruz are just as bad. Sure, Trump's economic policies don't make sense. But that can be said of all the viable candidates and, if anything, Cruz's "abolish the IRS" bit of pandering is more bananas than anything Trump has said on this front. Trump may talk about a big wall on the Mexican border, but Cruz revived the whole "missile defense" fantasy, known as "Star Wars", that Republicans have been dwelling on for the past 35 years.

As for Rubio, well, Krugman said it best:

Donald Trump is a “con artist,” says Marco Rubio — who has promised to enact giant tax cuts, undertake a huge military buildup and balance the budget without any cuts in benefits to Americans over 55.

The entire Republican brand is built on bullshit. These candidates and establishment figures like Romney and Paul Ryan can rush forward and preen about how Trump is such a racist and a sexist and they would never truck with that sort of thing, but is there anyone standing who actually believes them? They want the same things he does. They just want to be more coy about it.

That much was underlined when Fox News asked the only question that really mattered all night (besides the ones involving hand size, a critical issue of national importance): "Can you definitively say you will support the Republican nominee, even if that nominee is Donald J. Trump?"

Rubio, Cruz, and John Kasich all answered, after some wiggling, that the answer is yes. Because, as much as they may dislike Trump's noisiness and bluntness, what they dislike more is the idea of a Democrat, especially a female Democrat, in the White House. Being able to pass a bunch of regressive legislation that curtails voting rights, increases income inequality, shuts down access to reproductive health care, and stops the Black Lives Matter movement dead in its tracks is the real priority here. And with that answer, they showed that the #NeverTrump movement is just as hypocritical as every other posture establishment Republicans take.