Hate-watching the GOP: The debates are officially trashy reality TV — and by those rules, Trump's winning

This season of “Decision: America” has gotten really weird, building to a yooge season finale showdown in Cleveland 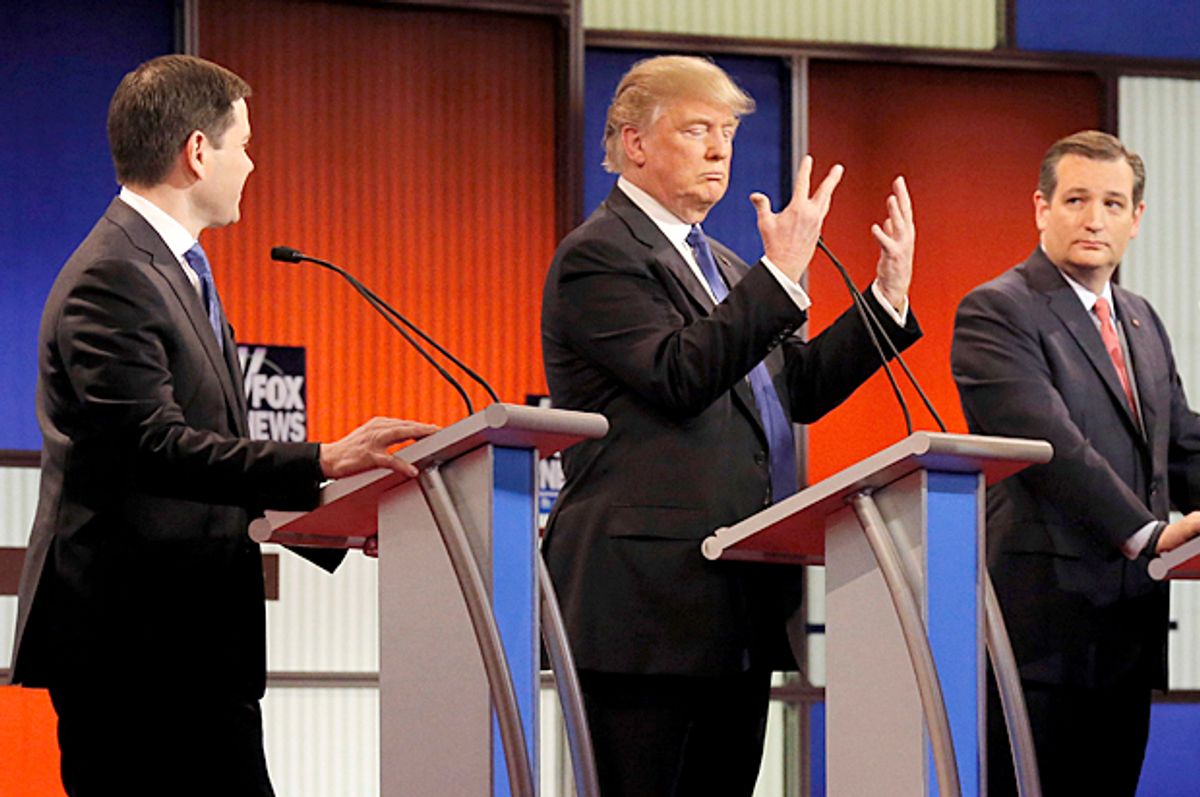 If you had any inclination towards expecting civility from the Republican candidates for president, last night would have been your dark night of the soul. The 11th Republican presidential debate was even more of a disaster than last week’s well-covered “[unintelligible yelling],” and that one ended up becoming a campaign tweet for Hillary Clinton. There was not even a nod towards civility or a gesture towards respectful behavior; it was just a showy, over-the-top pageantry of argument. Seeing these men bicker over who deserved to sit in the Oval Office and control the lives of millions if not billions of people was a stomach-clenching, bile-roiling experience, given that the candidates got to literal dick-measuring within seven minutes of getting on stage.

Which is why, for those of us who aren’t voting in the Republican primary—and are enjoying seeing each of these men destroy their reputations—last night’s two-hour episode of “GOP Debate” was the best yet. I mean, it’s frustrating that you can’t sympathize with any of the characters, and I do think last week’s episode did a better job with building to a feeling of utter meaninglessness throughout the evening—but look, as mindless guilty pleasures go, it’s about on par with “NCIS.” Talky exposition, frequently implausible scenarios, and predictable narrative beats. Not as reliably fun as “Scandal,” but “Scandal” doesn’t have that “Survivor”-style twist, where candidates drop out and mid-week promos change the narrative.

New York Times’ James Poniewozik has been on this angle for months now, analyzing how Donald Trump’s background in reality television has helped make this election season one that work with the same principles as "Survivor," "The Real World," or "The Apprentice." And Oliver Willis at Medium wrote Wednesday on how the performative space of professional wrestling explains the rise of Donald Trump—building on Roland Barthes’ “Mythologies,” for the semioticians in the room—discussing the types and modes of “combat” for the candidates. It’s all theater, and more to the point, it’s theater that refuses to acknowledge it’s theater.

This was underscored just last night by Trump’s roundabout way of responding to questions about his off-the-record meeting with the editorial board of the New York Times, in which he apparently admitted to being a lot more open to negotiation than his public persona is. The tapes, whether they’re damning or not, are an indicator that the players of the game might know it’s a game—it’s the same slip that a contestant on “The Bachelor” might make, when she “privately” tells another friend that she doesn’t really love their collective suitor.

Even Kelly’s vaunted showdown with Trump had the shape of a villain’s cut. Reuniting old rivals to play nice on-camera is a tried-and-true reality television trope—though in this case it seemed like Fox News’ editors were competing with Trump’s. The network took the opportunity of having Trump back on their own turf to air in near-totality a Kasich attack ad against Trump that paints him to be thick as thieves with President Vladimir Putin of Russia. The night was dominated by questions pointed at Trump or pointedly about him. Kelly got off some strong arguments about Trump University and his “flexibility,” in particular.

But in reality television, the person who commands the camera’s attention for the longest is typically the night’s biggest winner. Trump’s speaking times doubled those of his rivals, and there were numerous points in the evening where Kelly seemed to be debating him directly, while the other candidates stood around with their not-so-metaphorical dicks in their hands. Maybe, in future episodes of “Project Runway: Election,” the eliminated candidates will come back to help Trump put together his final collection for New York Fashion Week. Replace “collection” with “coalition,” “New York” with “Cleveland,” and “Fashion Week” with “RNC convention,” and hey, we’ve got ourselves a season finale. With this much unsolicited sexual innuendo and resulting controversy, ratings should be solid going into November.