The Genital Election: Republican "hands" debate is the culmination of 50 years of anti-feminism

Republicans have long been obsessed with gender and genitals, so the debate's penis posturing was inevitable 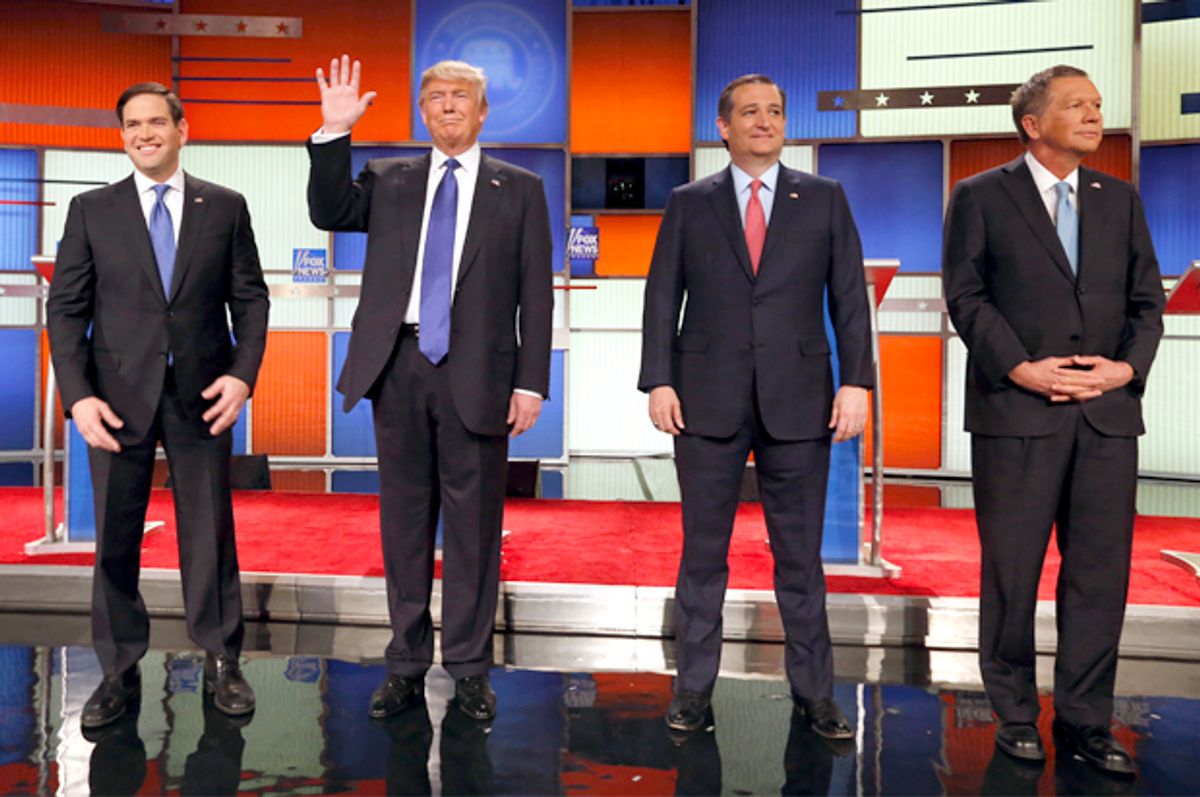 While it's always a tricky game trying to predict what future historians will say about present times, it's a safe bet to conclude that many will say it was no coincidence that the same year the U.S. elected its first female president, the Republicans devolved into a near-literal penis-measuring contest during what was supposed to be a primary debate. Donald Trump has forced a lot of arguments kept to the subtext in conservative politics — about race, gender, religious identity, money — right into the text and during Thursday night's Fox News debate in Detroit, he did it again.

It's tempting to blame Trump, in all his short-fingered vulgarian glory, for this turn of events. Certainly, that's what Marco Rubio wants you to do, going on CNN to dramatically sigh about how he supposedly wants to talk about the issues and how Trump is "the most vulgar person to aspire to the presidency". But it's worth remembering that Trump didn't start the dick joke cycle. It was Rubio himself, who started using a 80s-era Spy magazine dig at Trump for having small hands in his campaign speeches. Trump was just responding and, in classic Trump fashion, he dispensed with the pretenses.

But not to wallow too much in psychoanalyzing this whole thing, but it's hard to ignore the fact that the dick chatter escalated dramatically after Hillary Clinton racked up a substantial win on Super Tuesday, making it clear that she is almost certainly going to be the Democratic nominee. Conservatives have been in a state of sexist panic over women's growing social power for nearly five decades now, so it's really no surprise that, with the threat of the first female president looming over their heads, Republicans are going to contrive as many ways as possible to remind voters of the thing they have that Clinton doesn't: A penis.

This isn't even the first time in this race that conservatives have contrived a way to force conversation about genital differences between the frontrunner and the entire rest of the field, including Clinton's Democratic opponent, Bernie Sanders. In December — after Clinton turned in yet another excellent debate performance that uncomfortably reminds her sexist detractors that she is, despite the lady thing, a competent politician — conservatives, particularly Trump, made a point of talking about her lengthy bathroom break as much as they could. Because women have to sit instead of efficiently stand to pee, hur hur.

The choice to go genital during this race may not even be a conscious choice. Politicians and pundits live in the world, after all, and in the everyday world, it's common enough to reference people's genitals as a way to reinforce men's greater social power. We live in a society where "pussy" means "coward" and "dick," while not a pleasant thing to call someone, still connotes power. Even trans women aren't left out of the genital trolling, and are frequently subject to invasive interest about what kind of junk they have in their pants and whether that makes them "real" women.

But this isn't just about Hillary Clinton, though her mere presence is clearly provoking some ugly attitudes to come pouring out. On the contrary, this has been a long time coming. For literally decades now, the Republican Party has built a huge part of its identity around anti-feminism. This started in the '70s, when the religious right successfully fought and killed the Equal Rights Amendment, and really became central to the Republican identity when Ronald Reagan's presidency cemented the marriage between the anti-feminist religious right and his party. This was helped by the fact that Reagan was followed around by a wife who never failed to stare at him in wondrous rapture like being a man made him a god on earth.

The anti-feminism of Republicans manifests in many ways: Kneecapping efforts to pass and enforce equal pay laws, pushing marriage as the best and only way for women to be economically viable, demonizing feminists, minimizing sexual harassment and violence against women, Clarence Thomas on the Supreme Court. But the biggest, most forceful front of the Republican war on women, since the 70s, has been focused on, what else, genitals.

The same week that we witnessed Republican candidates talking unsubtly about big dicks during a debate, the Supreme Court listened to a case about whether women have a right to control our own reproductive organs, no matter what size they may be. It's yet another case in a long and complex history of Republicans trying to dismantle the legal right to abortion, a right which symbolizes, to conservatives, the collapse of patriarchal authority in women's lives.

Ever since Barack Obama was elected president — and Hillary Clinton got real close, something Republicans do not forget, even if some Democrats do — the war on women's right to control their bodies has exploded. Republican-controlled states started passing hundreds of abortion restrictions. The Republican need to get into women's pants and control what we got in there often feels downright pervy. Many states require women who want abortions to undergo an ultrasound (most of which are vaginal) that is longer than is medically necessary. It's a law which, to be blunt, suggests that legislators enjoy punishing women who have sex by making them endure vaginally invasive medical procedures.

To add to this, the war on women expanded beyond abortion to contraception. The religious right has been quietly contraception-hostile for decades, but that hostility has gone mainstream in the Republican Party. Seemingly overnight, Planned Parenthood went from a relatively non-controversial provider of reproductive health care (with abortion being only a small portion of its work) to being Republican public enemy number one, with politicians competing over who will do the most to end subsidies for affordable contraception.

Add to that the widespread attacks on insurance coverage for contraception, which also used to be non-controversial, and you get the picture: Women are getting more powerful, and conservatives see genital-focused attacks as the best way to roll back women's gains.

In this way, the big dick posturing of Thursday's debate was inevitable. Sure, it might not have gotten so blunt without Trump in the race, but for years this kind of anxious masculine preening has been growing on the right, which cannot be a coincidence in the face of feminism's popularity.