The new “Ghostbusters” and race: Why it matters that Leslie Jones isn't playing one of the scientists 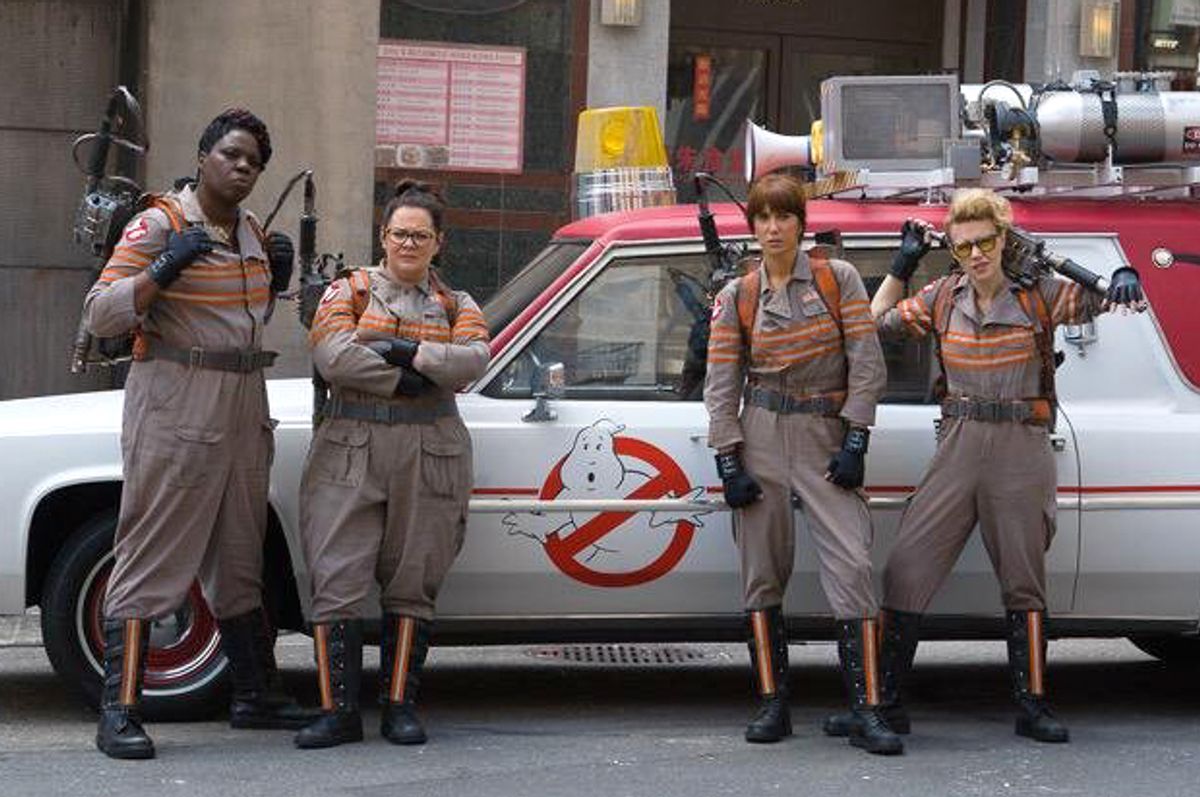 Yesterday, the trailer for this summer’s all-female “Ghostbusters” reboot finally hit the Internet. Seeing Kristen Wiig, Melissa McCarthy, Kate McKinnon, and Leslie Jones suited up and ready to fight the paranormal had fans bursting with excitement—except for one problem: Jones’ character, Patty, is a streetwise MTA worker, while her co-stars play scientists. Patty joins the team after offering her knowledge of the city, as well as her uncle’s hearse to drive. “You guys are really smart about this science stuff, but I know New York,” Patty says.

In a response video posted to YouTube, Akilah Hughes called Jones’ character “a minstrel show… the loud, screaming thing in the room.” Leslie Jones defended the portrayal on Twitter, writing that an MTA worker wrote to her to thank her for giving subway employees a “semblance of humanness.” The MTA worker wrote to Jones, “That glass in the [booth] have folk thinking I'm invisible, that I'm not a college graduate, and a producer, comedian, writer, actor, etc. I'm a verb.”

Jones’ response is an important reminder that MTA workers deserve to have their stories told onscreen, too. And yet critics of the trailer could have a reason to be worried. The glimpses of Patty we see in the trailer are reminiscent of decades of tokenization in cinema, which reduces people of color—and specifically black women—to being portrayed as mammies, “Magical Negroes,” and token black friends. These characters rarely have their own developed narrative arcs or rich inner lives and primarily exist to service the white characters in their quest for fulfillment. While these characters pay lip service to racial inclusion, they are reduced to second-class citizens onscreen.

The invaluable TV Tropes website—a bible for common patterns and stereotypes in media—provides a helpful overview of the “Black Best Friend” character. Who is the Black Best Friend? “She's never too busy to lend an ear, or come along on your wacky schemes,” the site explains. “She is flawless to the point of being unreal. … Is it because she has no love life, no apartment, and no family? It's hard to say, but there's one thing for sure. She has a cell phone, and never ignores your calls.”

There are countless examples of this character in film and television. Prominent Black Best Friends include Elena Tyler, Felicity Porter’s studious classmate on “Felicity”; Mercedes on “Glee,” the New Directions member who temporarily serves as Kurt’s beard in the show’s freshman season; and Wallace on “Veronica Mars,” who is paired up with the teen drama’s only other black character (Tessa Thompson), as if by default. These characters are frequently reduced to narrative afterthoughts: In early episodes of “New Girl,” the writers had such little clue what to do with Winston that they made it a running joke in the show.

Just because a person of color is in a supporting role doesn’t mean they have to be a token. As “New Girl” found its tone, the eternally drifting Winston became one of the strongest—and most delightfully offbeat—characters on the show. The program also became one of the few on television (along with “Brooklyn Nine-Nine”) to have two black men in key roles, after Damon Wayans Jr., who appeared in the pilot, rejoined the cast.

On “Community,” Shirley, played by Yvette Nicole Brown, smartly upends the trope: Bubbly on the service, her friendly smile hides what Brown calls a well of “suppressed rage.” Blogger Zeba Blay writes, “She speaks in a soft, sing-song voice that periodically breaks out into a deep bellow of sass when somebody crosses her. In a TV show that’s very meta about TV shows, it’s almost as if Brown’s role is to be always aware of that bubbling Sassy Black Woman below, and suppress it.”

In the Amy Heckerling film “Clueless,” Dionne has long been a fan favorite because she gets to do what so few Black Best Friends get to do: be confident and independent. She has her own relationships and an entire world outside of Cher’s. She is no one’s accessory. Vice’s Vanessa Willoughby recalls that growing up, the character was an important role model. “Dionne was a new kind of black girl on film: one who refused to sacrifice her blackness to fit in,” she writes.

Unfortunately, these handful of good examples only illustrate how commonly movies that feature black characters get it wrong. Mid-’90s teen films like “10 Things I Hate About You” and “She’s All That” cast actresses like Gabrielle Union and Lil’ Kim as props for their white counterparts. In “The Craft,” the coven’s only black witch, Rochelle, gets 25 lines in the whole script. Most of her dialogue consists of relaying information about the white characters. For example: “Nancy's sorry about what happened in biology. And she's mean to everybody, so don't take it personally.” She may as well be human window dressing for white women’s stories.

This happens constantly in Hollywood, even in movies that should be about black women’s stories. In Tate Taylor’s “The Help,” Viola Davis and Octavia Spencer (who won an Oscar for her performance) are reduced to glorified supporting parts. The protagonist of the film is Skeeter, played by Emma Stone, who interviews them about their experiences working as maids. Blay writes, “[T]hanks to the telling of their struggles, [Skeeter] gets a swanky reporting job in New York by the end and, of course, solves racism.”

Hollywood can do better by dismantling stereotypes and allowing women to tell their own stories, but it too often does not. Producers, writers and directors like these kinds of roles because they are familiar and comfortable for white audiences, who are used to seeing themselves in positions of authority and control over black lives. Casting Leslie Jones to play a scientist, and thus be on equal footing with her castmates, is relinquishing decades of power.

If IndieWire’s Andre Seewood argues that we’ve reached a point of “Hyper-Tokenism,” in which characters like Jones’ receive more screentime and presence on the film’s promotional materials but not greater agency in the film, and we need to keep demanding more than inclusion.

Thirty years ago, Ernie Hudson played a similar role in the original “Ghostbusters,” the only member of the crew not to be a scientist. He had 30 lines in the whole script, many of which are simply “Aw, shit,” “Oh no,” or “Let’s go!” Nearly three decades later, director Paul Feig has promised that the troop’s only black member would have a “bigger part.” Leslie Jones is right: MTA workers and black women working in all kinds of professions should be represented on film. Patty can be powerful, real, and also work behind a ticket counter. Hopefully, her story will be treated as just as important as those of the other women around her.