Donald Trump bragged about the size of his dick 10 minutes in, and somehow things got worse as the night progressed 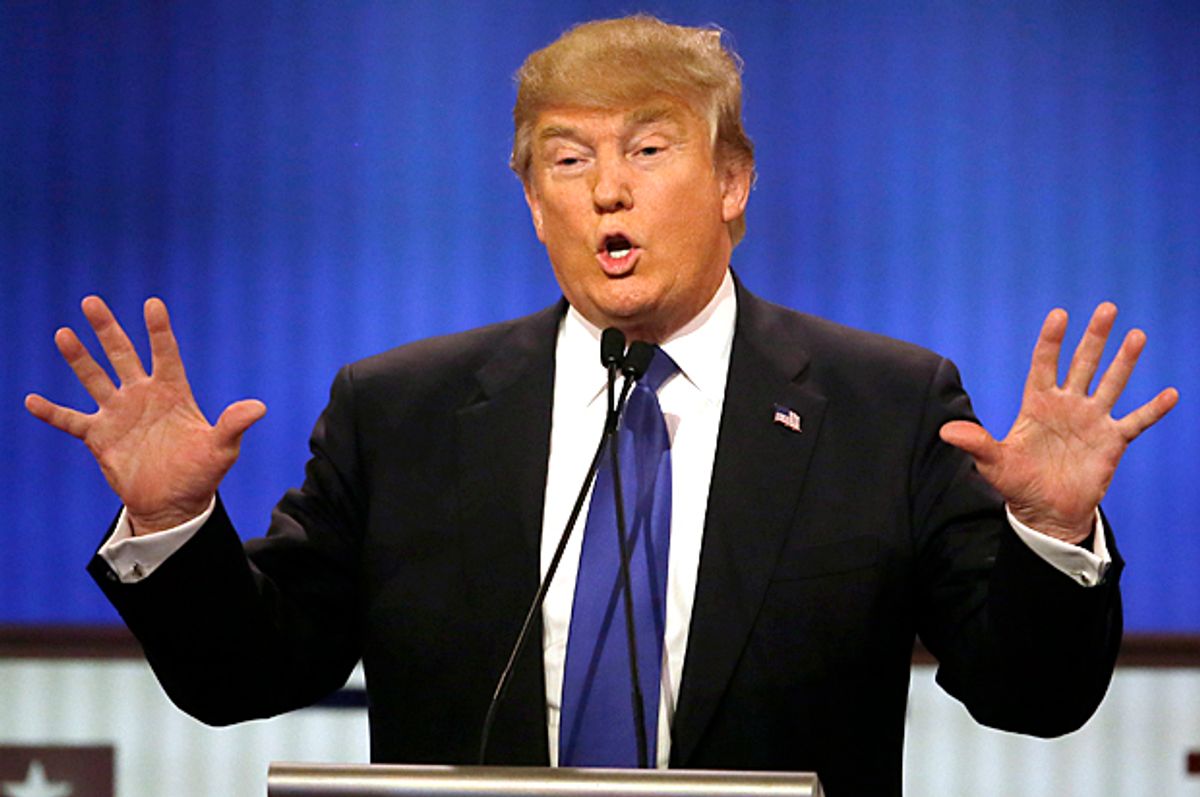 The big showdown between Donald Trump and Fox News' Megyn Kelly on the day Mitt Romney denounced the Republican frontrunner was predictably surreal and fairly toddler-like.

Here are a few of the more bizarre moments from the GOP debate Thursday night.

1. It was very important for Donald Trump to say on national TV that he does not have a small penis.

Marco Rubio earlier in the week made mention of Trump's small hands. This is a sore subject for Trump.

During the debate, the Donald wanted to make sure everyone knows or believes he is in no way under-endowed in the manhood department.

"He referred to my hands, if they're small, something else must be small," Trump said. "I guarantee you there's no problem. I guarantee that."

In the coming days, look for Melania Trump to back up that assertion on the campaign trail.

Asked what he would do to bring manufacturing jobs back to America and train people to do the jobs, Ted Cruz gave a bizarre, deflecting answer. “Detroit is a great city with a magnificent legacy that has been utterly decimated by 60 years of left-wing policy.”

He went all the way back to Henry Ford and WWII.

“And then for 50 years, leftwing Democrats have pursued destructive tax policies, weak crime policies and have driven the residents out.”

But what would you do to bring back jobs?

3. The Donald repeatedly asserted that the military will “do as I tell them” even if it’s illegal, a war crime and a bunch of high-ranking military people just said they will not obey illegal orders.

The Donald just kept repeating that they will do what he tells them. Because they will. They just will.

Trump also pointed out how much further Rubio is behind in the polls. "The people of Florida can't stand him," Trump said. "He couldn't get elected dogcatcher." He was clearly still pissed about the hand thing.

When Cruz hit Trump on guns, and how Trump has changed his position on the Second Amendment, Trump tried to interrupt. Cruz did this creepy, unctuous thing again where he told Donald to breathe and stop interrupting.

Rubio: “When they’re done with yoga, can I [say something]?”

6. Megyn Kelly mentioned that Trump is a little like Bernie Madoff.

While Kelly was generally a little more subdued in this debate, she had done her research on the whole Trump University lawsuit, which Trump kept trying to dismiss as minor.

As a reminder, Trump University is being sued for being a total scam, taking people's money without remotely giving them an education or delivering on its promises. At one point, Kelly placed Trump in the company of Bernie Madoff, a con artist who ripped off billions in an elaborate pyramid scheme and is now in prison.

That one stung! Trump did not like that. Not as bad as the small penis thing. But bad.