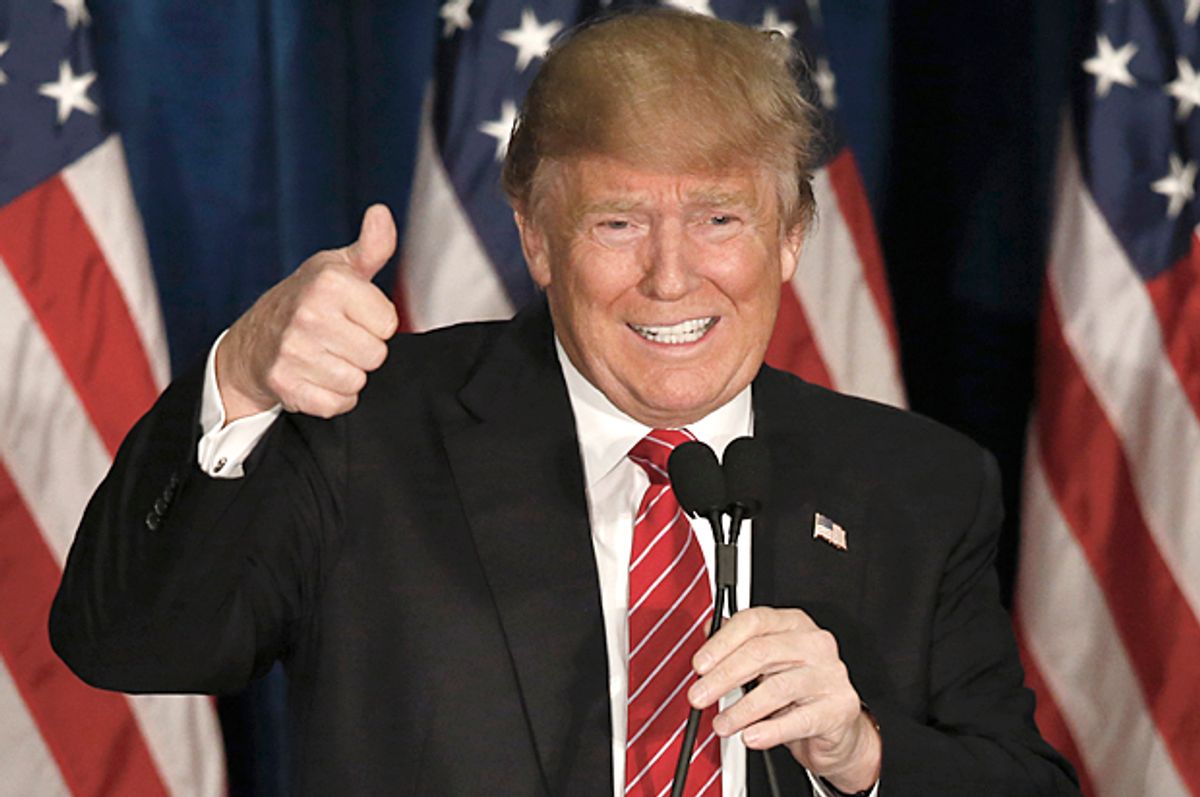 2015’s Word of the Year was singular they, according to the American Dialect Society, and it’s far too early to speculate on this year’s top word. But it would be easy to pick the word of the Presidential race so far: trumpery. This old word for various types of bullshit has gotten new life thanks to bullshit maestro Donald Trump. It’s become a common pastime to link Trump with definitions of trumpery on social media such as Twitter and publications such as Mother Jones. Here in Salon, Randy Malmud suggested we pull a Santorum on Trump by reviving an obscure meaning of trump: to fart loudly. But we hardly need a lexical campaign when trumpery exists. Trump’s name is already as stuffed with horseshit as his words.

People mean a lot of different things when they call bullshit, and there is a bullshit spectrum, which includes lies, flim-flams, boasts, nonsense, and other rubbish (as I discuss in my book "Bullshit: A Lexicon"). Trumpery has been used to cover a large part of that spectrum, starting with deceit in the 1400s when it was borrowed from the French tromperie. Trumpery, like the verb to trump, involved some sort of cheating, swindling, hornswoggling, or bamboozlement. Early examples from the Oxford English Dictionary (OED) find the word in revealing pairs: “tromperyes and deceytes” and “trumperies and double dealings.” From the start, trumpery was not to be trusted.

By the 1500s, trumpery was being applied to a different sort of crap: trifling, insignificant objects. Shakespeare used the term with this sense in "A Winter’s Tale" (“I haue sold all my Tromperie”) and "The Tempest" (“The trumpery in my house, goe bring it hither For stale to catch these theeues.”) That second use is the first known example of the term applying to stuff that’s not just worthless, but worthless and showy. A 1789 example in some travel writing by Hester Lynch Piozzi gives a sense of trumpery’s non-value: “A heap of trumpery fit to furnish out the shop of a Westminster pawnbroker.” Anything that comes by the heap, bunch, or load isn’t worth much.

As these meanings took hold, trumpery was also being used as it is today: for nonsense, malarkey, and bunk. Today, trumpery can refer to just about any sort of balderdash, but it used to refer specifically to religious or woo-woo ideas. Given his recent spat with the Pope, Trump himself might appreciate this 1731 use from travel writer Joseph Pitts: “They blame the Papists for having so many Trumperies in their Churches.”

Trumpery has had a few other obscure meanings. Misogynistic Trump might be pleased to learn that a trumpery can sometimes be a strumpet. Another meaning refers to weeds or anything else gunking up a garden. Rarely, trumpery has been an adjective. Though it sounds odd today, the OED has examples of trumpery brooch, trumpery performance, trumpery new house, trumpery rhetorician and trumpery quarrel. All those uses involve the insignificant or worthless meaning. An extremely rare variation popped up in 1886: “How these things impress the lover of Gothic who dwells in a country of churches of inexpressible trumperiness and shabbiness!” Trumperiness doesn’t exactly roll off the tongue like truthiness, but then again neither does President Trump. In these dark days, we need all the lexical ammunition we can find.

Much like when Joe Biden used malarkey in a debate with Paul Ryan, the lexical stock of trumpery has risen thanks to Trump. Writers find it hard to resist linking Trump to this older noun. For example:

“Trumpery is coming to Louisiana. Naming his state campaign team in Louisiana, The Donald says he will soon honor us with a visit.” — Jan. 23, The Advocate

Word evolution never stops, and it’ll be interesting to see if Trump gives an already disparaging word a whole new odor—and perhaps a revised origin. Sometimes, trumpery gets a new spelling as Trumpery—to emphasize that it’s not just any trumpery, but trademarked Trumpery from the orange blowhard himself. It would be fitting if some people began to wonder if Trumpery had been coined for Trump, as the capitalization implies.

That wouldn’t be the first time a word evolved due to misunderstanding. Eggcorns—so named because of a misspelling of acorn—are spelling changes that are incorrect but logical, and sometimes they stick. That’s why chaise lounge is probably more common than the original chaise longue, and it’s why free reign may someday overtake free rein. Logical mistakes tend to multiply, and I can’t imagine a more logical whoopsie than that assuming Trump begat trumpery. If there’s ever a time to throw accurate etymology out the window and go with a good story, this is that time.

But as scary (and racist and misogynistic and Islamophobic) as candidate Trump is, we should be thankful for the lexical synchronicity of his name. We may never see the like again, unless future elections feature candidates named Marla Malarkey, Ed Twaddle, Jennifer Gibberish and Bobby Bullshit.