A "final girl" who gets to get off: "The Witch" proves nothing's scarier than an unapologetically liberated young woman

America loves its witches, so long as we’ve adequate kindle nearby—and what is a witch if not a woman who rebels? 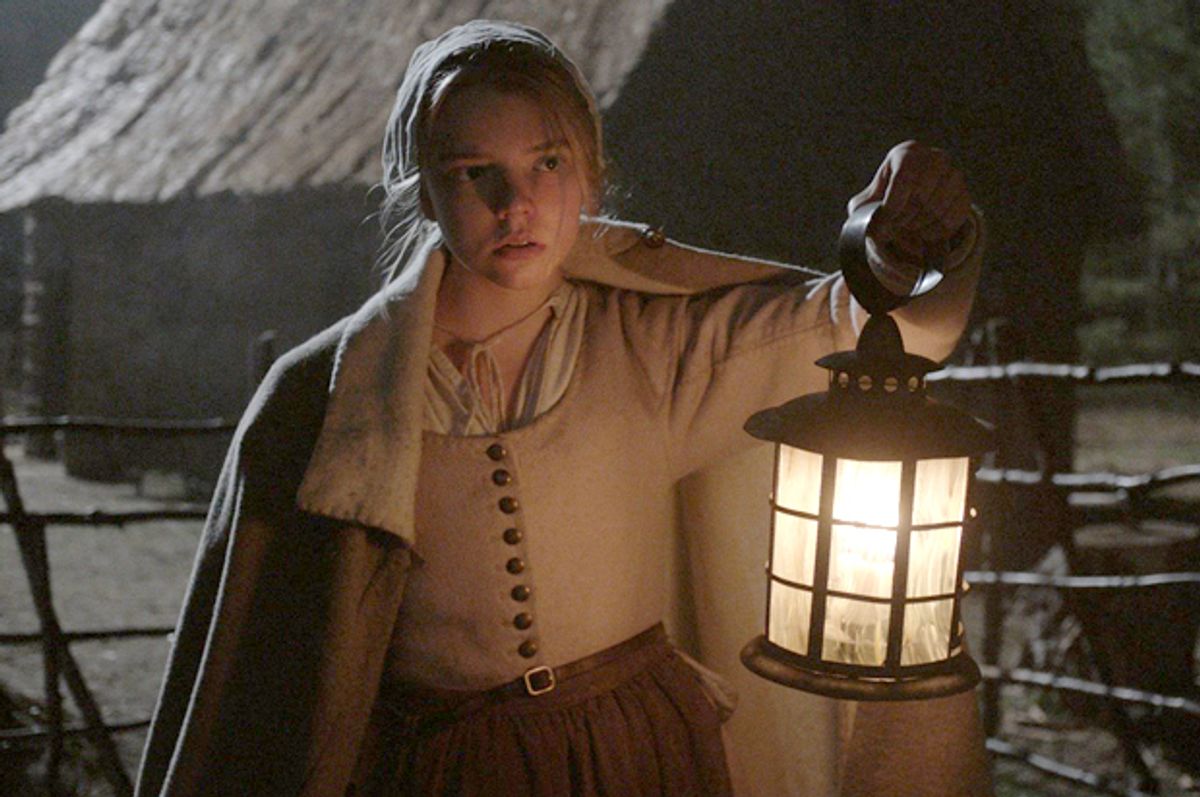 Note: The following contains many spoilers for "The Witch," including a description of the film's ending.

Posed by any other than the Prince of Darkness, these questions would seem to answer themselves, especially when intoned into the ears of an emboldened young woman. Toward the end of “The Witch,” Robert Eggers' lyric flirtation with horror, the welcome response is a wide-eyed “yes,” seguing into a finale at once awesome and unsettling. Everyone knows that the virgin makes it out alive, but seldom does survival come with an orgasm. Here, that’s exactly what happens: The “final girl” finally gets to get off.

Critics have already praised the film as a feminist fable about the combustibility of female sexuality, a “sinister, smart” approach to genre, and even “the year's scariest movie.” Scariest movie of the year? No scarier, I'd say, than a day in the life of a teenage girl in the throes of burgeoning womanhood and its attendant threat of sudden ostracism. Most of these superlative verdicts seem to be delivered by spooked-out men drawn to (and repulsed by) the film's loaded images, and less attentive to Eggers’ subversion of a classic horror trope: the “final girl” laced into a Puritan bodice. As Erik Piepenberg put it last year in the New York Times, “the final girl ... is the feisty character who’s left to face the killer in a horror movie. To cheers from the audience, she usually wins the climactic combat with weapons and wit, providing a cathartic end to the gore and gloom.” The difference in “The Witch” is that climactic combat concludes in midair climax, and that not everyone is cheering at such literal comeuppance.

Dividing audiences since its national release two weeks ago, the Sundance favorite and self-described “folk tale” initially seems to confirm a fairly tired vision of Wanton Womanness—the “witch” in the woods shifting predictably between Snow White siren, Red Riding Hood vamp, and has-been Fredericks-of-Hollywood hag. But the real rebel—Thomasin, played by Anya Taylor-Joy—anchors the film from its opening shot, a medium close-up of her attentive face as her family awaits banishment. “What went we out into this wilderness to find?” demands her father, William (Ralph Ineson), before a chilly congregation. We will soon learn that this question is not rhetorical.

Though mostly a figure of virtue and daughterly obeisance, gradually it is clear that Thomasin’s sharp mouth and modest cleavage are too much for the homestead to handle. Following orders, finishing chores and telling the truth don’t score her many points, and it is often the latter for which she is most scorned. “You’ve cursed this family,” spits her mother, Katherine (Kate Dickie), following the death of her first son (Harvey Scrimshaw), while her other two children, Arbusonian twins, scheme creepily offscreen. “The devil hath betwixt your tongue,” her father cries when Thomasin calls him a hypocrite, a liar and a poor shot in a Calvinist war of words. Before being dragged across the yard and into the home for further interrogation, she pleads, “Why have you turned against me?”—a response not only to accusations of witchcraft, but perhaps more poignantly to her parents’ ongoing plot to shop her out to another family, her sexuality too dangerous and her presence too strong to keep around the farm, marriage or servitude her only shot at survival (and that’s if she’s acquitted of wickedness). In a long take a few scenes later, Thomasin lies on the ground beneath her mother’s nightgowned body, the two conjoined as though in sleep. After 25 seconds of brutal silence, Katherine is shoved off like the dead weight she has become. Our heroine rises, blood on her blouse, filicide averted.

Sound terrifying? We need not look back to the 17th century, nor to the 300 years that followed to show that independent women might prove a fright. Anita Hill, Monica Lewinsky, Hillary Clinton—America loves its witches, so long as we’ve adequate kindle nearby. (Is it any coincidence that the one thing Thomasin’s father can provide is a towering pile of firewood?) What’s remarkable about “witchiness” is how perfectly it conflates women with little in common but a sense of self-worth, a modicum of ambition, and the audacity to express the two sans permission from a man. As Rebecca Traister points out in her latest book “All the Single Ladies: Unmarried Women and the Rise of an Independent Nation,” these women continue to disrupt our country’s status quo, reshaping it in their wake. In a recent interview on "Fresh Air," Traister discusses how, regardless of whether by choice or fate, life without men has been historically seen as “scandalous” in the “best case scenario,” violating of the law of coverture wherein a woman’s selfhood was legally subsumed by the identity of either her father or husband. But the last two decades has witnessed a seismic shift in this dynamic, Traister says, with the “creation of an entirely new population: adult women who are no longer economically, socially, sexually or reproductively dependent on or defined by the men they marry.”

With the rise of this “new nation,” might a new breed of final girl follow suit? The trope seem to be having a moment, if not in the most traditional vein. From Guillermo del Toro’s “Crimson Peak,” the righteous Edith outlasts her demonic hubby (Tom Middleston) and his malevolent sister-lover (a raven-haired Jessica Chastain). Though technically not a virgin by the end, in proper final girl fashion, she kills them both in the pure-white snow, her flaxen hair billowing in the wind (not unlike Thomasin’s after knifing her mom). A more contemporary incarnation of the virtuous final girl can be found in the Ma character from “Room,” in an Oscar-winning performance by Brie Larson. While not billed as horror, the film’s veritable monster, “Old Nick,” is a lot scarier than Satan, enslaving a teenage (and presumably virginal) Joy and then impregnating her with the child who narrates much of the story. A good girl to the core (she is initially tricked and abducted via sympathy for a stray dog), Joy’s ability to escape Room with her innocent son, Jack (Jacob Twemblay), follows final girl logic. Still, the fact that her father—played by a surprisingly unlikable William H. Macy—won’t acknowledge his grandson due to his rape origin, throws into relief paternal fears over sex gone wrong, the virgin/whore dichotomy rearing its ugly head.

For better or for worse (and many would say for the better), “The Witch” is as much a genre piece as it is feminist psychodrama, and doesn’t shy from a certain bald (occasionally ribald) tone. In the film’s final segment, as they are trapped in a pen with “Black Phillip,” the family’s beloved but bedeviled goat, Thomasin asks the befuddled twins if either is a witch. In a kind of gallows humor (two brothers have already gruesomely perished, and the three surviving siblings are “grounded” in a manner that makes missing prom seem enviable), one twin counters back, “Are you?” But the film is also scary at times; it is bloodied apples, branded brothers, and newborns churned into body wash. It’s the threat of starvation, rotted crops, a cracked egg oozing a half-formed chick. But it also doesn’t have to be taken any more seriously than its endorsement from the Satanic Temple (a clever move for a group attempting to rebrand “Satan” as a route to individualism). And despite the strong reception to Eggers’ debut, the director announced this week that, flouting genre expectations, there will be no sequel. The film’s last shot is all we get.

“What do you want?” a man asks a newly orphaned Thomasin at the film’s conclusion, imploring her to “sign the book.” It is the sole time in the entire film that her desires are validated, that the very concept of female desire is not immediately dismissed. Who can blame her, then, for selling her soul and deciding to join what one critic calls “a furious Black Sabbath nightmare”—a nightmare, I might add, that resembles a womyn’s music festival as much as anything else? Stripped of “shift” in a scene less lurid that luminous (no full frontal here, a refreshingly prudent decision, as was that to depict Taylor-Joy in medium-close-ups for most of the film), Thomasin challenges the slasher cliché that good girls might outlive their friends (and family and livestock) but never get to have fun. In the end, she floats among the pines, arms outstretched and head thrown back, as the others howl above the flames. They’re crazy and scary and having a blast. She is ravished, laughing up at the stars, her face softly glowing.

“Single female life is not prescription,” claims Traister, “but its opposite: liberation.”