This is how the GOP imploded: The real story behind the conservative crack-up, and the creation of Donald Trump

Donald Trump used right-wing rhetoric to steal the conservative base. But this crack-up has been a long time coming 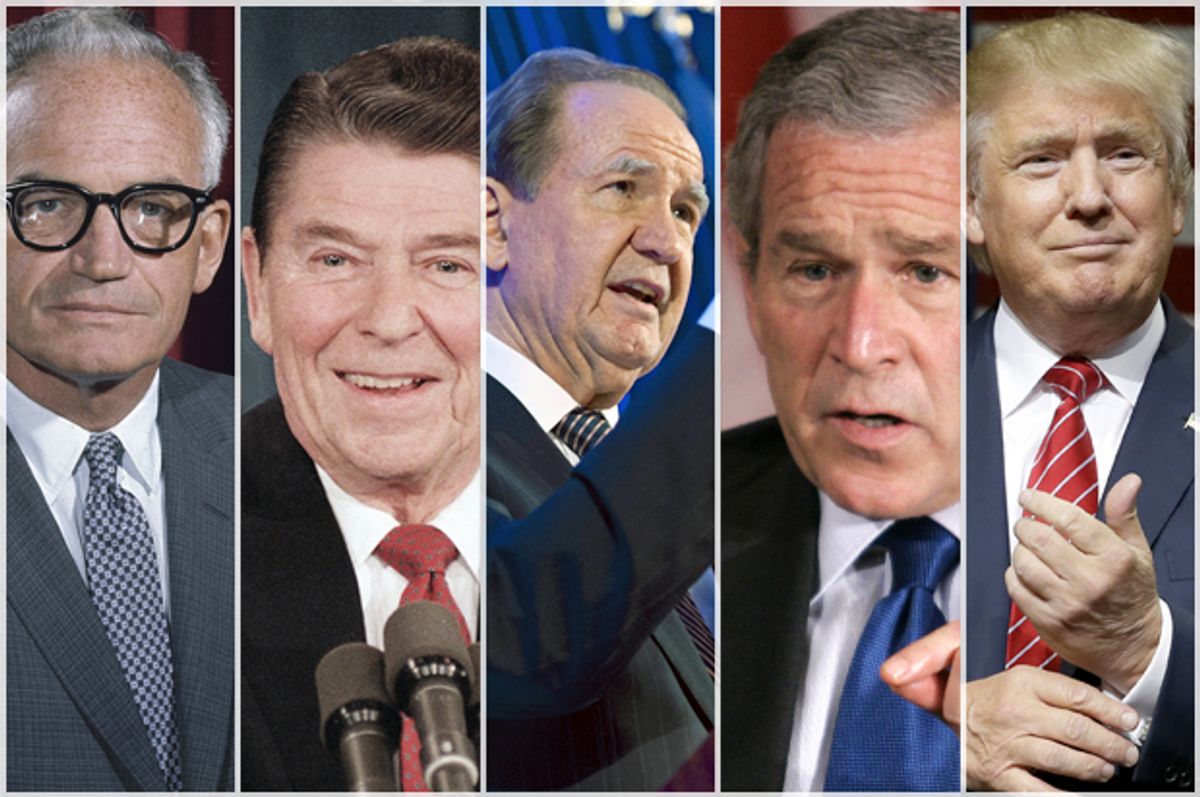 Today’s civil war in the GOP has observers scrambling to make sense of the struggle among the current Republican presidential candidates. Pundits are trying to find the roots of the chaos in President Obama’s 2008 election or in the rise of the Tea Party in 2010. But the current fights are only the fallout from a split that started in the 1930s, cracked open in the 1960s, and was complete in the 1990s.

We cannot understand the present without understanding that earlier rift.

The Republican Party split in two in response to the New Deal. In the 1920s, Republicans had embraced the idea that “the business of America is business,” as President Calvin Coolidge put it. But when the bottom fell out of the American economy, Democrat Franklin Delano Roosevelt insisted that the government must stop the abuses that had created the crisis. During his administration, Democrats passed laws to regulate business and finance, as well as to protect labor and provide a basic safety net for Americans. But Republicans loathed these policies. They thought that the taxes necessary to support an active government would tie up capital that wealthy men would otherwise use to invest in the economy. They howled that the New Deal threatened freedom, made people dependent on government, ushered in socialism, and launched a class war that would destroy the nation. And voters reelected FDR in 1936 with more than 60% of the vote.

FDR’s continued popularity made many Republicans recognize that the party would die if it did not bow to the reality that Americans wanted activist government of some kind. One branch of the party, led by New York governor Thomas E. Dewey, accepted that reality, although its members wanted more freedom for business. But a reactionary faction, led by Ohio Senator Robert A. Taft, insisted that the New Deal was un-American. The Republicans must not, they said, become a “Me-Too” party. When WWII ended, Taft’s faction joined with wealthy southern Democrats who hated the New Deal’s civil rights policies to try to roll back FDR’s legacy.

This split between the Taft Republicans and the moderates became a war when moderates from New York and New England helped General Dwight D. Eisenhower win the 1952 Republican nomination. The convention included fistfights. Taft loyalists insisted that the nomination rightly belonged to Senator Taft, and they never forgave Eisenhower for stealing it. They condemned the “Eastern Establishment” that had secured Eisenhower’s nomination. Those people were apostates, polluting the pro-business principles of the true Republican Party.

When Eisenhower developed his own version of the New Deal, Taft Republicans exploded. Eisenhower based what he called the Middle Way on the idea that “if a job has to be done to meet the needs of the people, and no one else can do it, then it is the proper function of the federal government.” Although he trimmed business regulation, he kept the upper income tax bracket at 91% and backed a national healthcare system (although he could not get it through Congress). He also supported the largest public works program in American history: the 1956 Federal-Aid Highway Act constructed 41,000 miles of interstate highways. The economy boomed in the Eisenhower years, and Americans liked Ike and loved the Middle Way.

That popularity infuriated Taft Republicans. An activist government had been bad enough under Democrats, but when a Republican also regulated business, provided a social safety net, and developed infrastructure, Taft’s supporters insisted that both parties had been hopelessly corrupted by communism. When Republican Senator Joseph McCarthy began in 1953 to investigate Eisenhower’s State Department for harboring Communists, Taft supporters cheered him on.

Chief among McCarthy’s defenders was William F. Buckley, Jr. In 1951, fresh out of college, he had launched a broadside at America’s post-WWII government. In God and Man at Yale, he argued against the Enlightenment idea that society improved as the public weighed fact-based arguments. The popularity of the New Deal over Taft Republicanism proved that truth did not win out in a free contest of ideas, he argued. Instead of pursuing “truth,” leaders must attack bad ideas like secularism and New Deal economics, replacing them with Christianity and individualism. In 1954, just after McCarthy’s downfall, Buckley and his brother-in-law L. Brent Bozell defended the disgraced senator. In McCarthy and His Enemies, they argued that America was divided in two. “Liberals,” by whom they meant all Americans who accepted the New Deal/Middle Way consensus, were destroying the country by ushering in Communism. “Conservatives,” who would return the country to strict Christianity and Taft Republicanism, must purge Liberals from the nation. In 1955, Buckley launched National Review to tell the “violated businessman’s side of the story” and destroy “national unity,” “middle-of-the-road” policies, and “bipartisanship.”

And so, from the Taft Republican faction, Movement Conservatism was born.

Movement Conservatives fought to take control of the party from moderate Republicans. Movement Conservatives stood firmly against taxes and government activism, but they built their power by adding racism to their anti-government crusade. They argued that tax dollars redistributed wealth from hardworking white people to undeserving people of color and women. This argument proved a winner when Movement Conservative Arizona Senator Barry Goldwater’s only five states in 1964--aside from his home state—were in the Deep South. In 1968, Nixon captured Goldwater voters by adopting the Southern Strategy to assure white southerners that the days of federal enforcement of civil rights were ending. In 1980, Reagan began his general election campaign in Philadelphia, Mississippi, where three civil rights workers had been murdered during Freedom Summer, and told the crowd, “I believe in states’ rights.” The message was unmistakable. He also used the image of the “Welfare Queen,” a black woman who stole tax dollars by making fraudulent welfare claims, in winning the presidency.

With a Movement Conservative in the White House, the faction’s leaders tied the Republican Party to tax cuts, the deregulation of business, and the end of social welfare policies. Then, when even racism did not produce enough popular support for their economic policies, leaders welcomed evangelical voters into their movement, promising them conservative social legislation in exchange for their votes.

In the 1990s, Movement Conservatives forced moderate Republicans out of power. Even seemingly moderate George H. W. Bush had promised “No New Taxes” and rescued his failing 1988 campaign with the Willie Horton ad dishonestly linking an African American murderer to Democrat Michael Dukakis. But when Bush did, after all, accept tax hikes in 1990, Movement Conservatives skewered him. From then on, Movement Conservatives attacked any party member willing to entertain the idea of tax hikes, government regulation, or social policies as a RINO, a Republican In Name Only. They moved such apostates rightward by threatening to run primary challengers to moderate incumbents who tried to buck them. In the twenty-first century, Movement Conservatives erased moderates from the party.

Today’s split in the GOP, then, is really a fight among members of the Movement Conservative faction that currently dominates the party. And its leaders themselves created this crisis. To cripple Barack Obama’s attempts to resurrect government activism, they put their traditional rhetoric about racism and communism into overdrive. It has torn apart their uneasy coalition. Obama warned them. In 2010, he told the House Republican caucus that “if the way these issues are being presented by the Republicans is that this is some wild-eyed plot to impose huge government in every aspect of our lives, what happens is you guys then don’t have a lot of room to negotiate with me.” But Movement Conservatives kept running in 2010 and afterward on the promise that they would repeal or destroy Obama’s legislation and the president himself. And when the provisions of the U.S. Constitution and the separation of powers made that impossible, their supporters grew even angrier.

Now the party has splintered. National Review, the midwife of Movement Conservatism, pines for a true believer, but it cannot find one. The party’s “establishment” wants to continue its pro-business policies, and expected to nominate Jeb! only to see him crash and burn at the hands of an insurgency. The establishment is now scrambling through its JV line-up to find a candidate.

Party leaders never cared much about the social issues they promised to evangelical voters, but that bargain has now come home to roost with the candidacy of Texas Senator Ted Cruz, who is a Christian Dominionist eager to make America a Christian theocracy.

Movement Conservatives deliberately overturned a moderate American consensus in favor of government activism by appealing to the nation’s basest prejudices. Their movement is now collapsing under its own weight. With the death of that movement, the party, and the nation, has an opportunity to make a New Deal and resurrect a Middle Way.