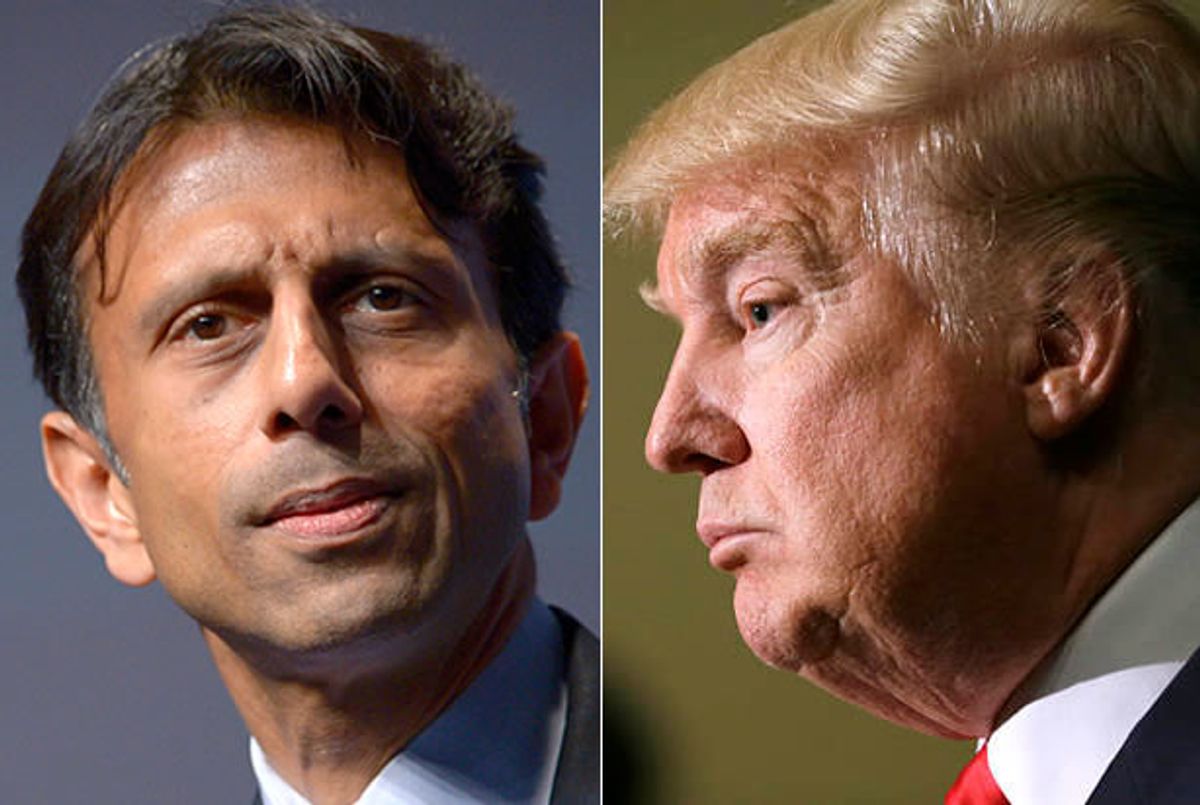 We all got to think a little too much about Donald Trump's manhood this week. No one deserves that. Of course, the state of the Republican campaign for president being what it is, Thursday night's debate was hardly the only shitshow in town. Just in case you missed them, right wingers spewed a variety of vile and ridiculous things in the past few days. Here are some other less-publicized low-lights.

1. Bobby Jindal blames President Obama for the rise of Trump.

Please immediately rescind Bobby Jindal’s Rhodes Scholar status. He is not a good look for you because he is a complete moron. This has been amply demonstrated in the past by his denial of fundamental realities like climate change and evolution and his insistence on making Louisiana youngsters ignorant of these basic realities as well.

Now, this genius has penned an absurd op-ed in the Wall Street Journal blaming—who else?—President Obama for Trump’s rise.

"Let’s be honest,” Jindal wrote, as if he knew how to be honest. “There would be no Donald Trump, dominating the political scene today if it were not for President Obama....After seven years of the cool, weak and endlessly nuanced 'no drama Obama,' voters are looking for a strong leader who speaks in short, declarative sentences."

Not that Jindal likes Trump, but being half right doesn’t make you any less crazy.

"President Obama loves to construct straw men so he can contrast his heroic self against them. But Donald Trump needs no characterization; he is capable of being absurd on his own, no outside help required," Jindal wrote. "Without President Obama, there is no Donald Trump. Mr. Trump often diagnoses the ills Mr. Obama has caused, but his prescriptions are just as often wrong. America deserves better."

2. Sarah Palin and Andrea Tantaros are, like, soooooo mad at Mitt Romney.

The Palinator and Fox Newsian Andrea Tantaros have this much in common: They both love them their Trumpster. So it stands to reason that they were sooooo mad at Mitt Romney this week for his point-by-point takedown of the Republican frontrunner. These ladies definitely know which billionaire they prefer, and it isn’t Lord Mittens.

From Sarah Palin’s fevered brain came these words in the form of a Facebook video:

"The 'machine's' deception and nonsensical attack on Trump isn't really an attack on the candidate. It's an attack on conscientious, hardworking, patriotic Americans who know we need a revolution to stop the complicit politicians who are fundamentally transforming America. We found the revolutionary. Donald Trump is the shock the Permanent Political Class needs to wake them up…to destroy their selfish cabal…to respect the will of the people…to make America safe and solvent…to make America great again."

"Don't take the bait, Mr. Trump,” Palin warned her crush, before promising that she and her ilk have his back.

And with friends like her...we're not sure why Trump needs all those burly security people.

For her part, Tantaros did her best to come out as a reasonable person, with what passes for cool-headed analysis on Fox (yes, yes, low bar, we know): “Mitt Romney, smart guy, good family man, wrong messenger," Tantaros told her fellow panelists. "It’s almost like the coach who lost the Superbowl is now coming out and telling the winning coach what plays to call.”

Ooh, clever use of a sports metaphor, Andrea!

Tantaros had the ball and she kept running with it. “Mitt Romney is a liberal. He’s pro-choice. He ushered in Obamacare with Romneycare," she sputtered. "Mitt Romney has no business lecturing anyone on electability or conservativism, and I feel that conservative voters can tell Mitt Romney that he can take his brand of conservativism and shove it.”

No word from either of these two lovelies on Palin-sponsor John McCain’s denunciation of Trump.

3. The single most absurd thing Donald Trump said this week.

Of course, Donald Trump is the Old Faithful of Geysers when it comes to spewing crazy and horrifying ideas. We learned that he has a need to tell the world he has a fine penis, and would indeed commit war crimes if he becomes president. Those are important. We just had to point out one other completely ridiculous and unhinged absurdity that issued from his piehole this week.

When he finally realized he had to at least say he disavowed David Duke, the KKK and white supremacy, the Donald went on to make an insane and truly laughable claim. In an interview with ABC’s George Stephanopoulos on Super Tuesday, Trump asserted, “nobody has done so much for equality as I have,” because his Palm Beach Mar-a-Lago is “totally open to everybody.”

So, just to summarize, the great civil rights leader Donald Trump does not discriminate when it comes to taking people's money, not at his club, and not at Trump University. People of all races and ethnicities are free to be his marks.

That's the world according to Ted. Wherever you go, if there are problems, there must be a liberal boogieman. Cruz mouthed this bit of absurdity during Thursday night's debate, and no one, including that tough-as-nails journalist Megyn Kelly (ha!) asked him how he figures liberals and lefties are to blame for unemployment in Detroit.

Then again, had someone asked, he probably would have employed his twisted logic to argue that liberals caused the world to stop buying and wanting gas-guzzling American cars. Liberals are like that. Very, very sneaky.

Donald is not entirely alone in his narcissistic, self-reinforcing bubble. And he can't be everywhere at once. So he has his minions and sycophants help make his bizarre case to the world.

One of these mouthpieces is a helmethead by the name of Jeffrey Lord, who went on CNN to make the most specious of claims about the KKK in a discussion with Van Jones. The utterly reasonable and ever-sane Jones did nothing but speak sense, patiently explaining to Lord that the KKK is a terrorist organization that kills people on the basis of their race, and Donald Trump, proud anti-terrorist that he is, ought to acknowledge that.

Not to Lord, who used his TV time to claim it is Democrats who divide people on the basis of race, and that the Klan "killed black people to further the progressive agenda."

We, and all the world's reasonable people (and Trevor Noah) call bullsh*t.