Donald Trump orders Republicans to unite behind him. Here's why they almost certainly will

Some Republicans are implying they'll never follow the Donald's lead. Don't believe it for a second 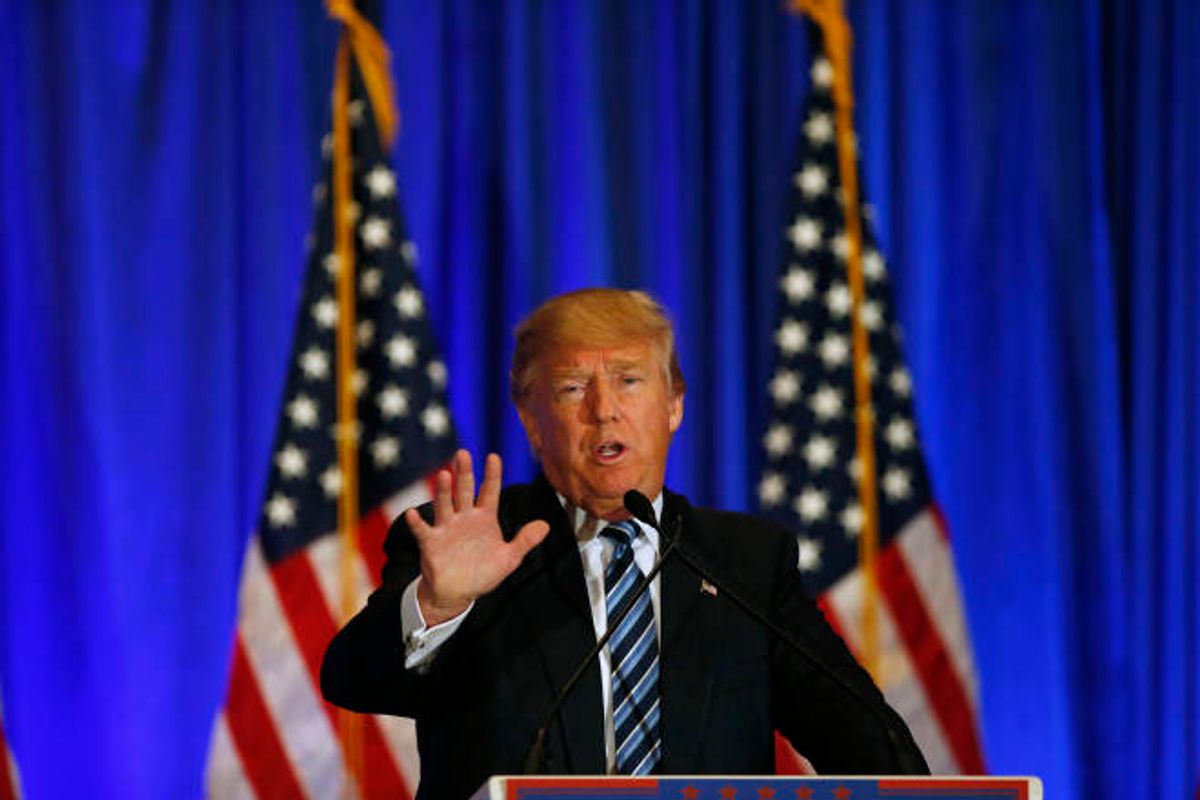 After a weekend during which he fell short of expectations for the first time since placing second in Iowa, Donald Trump attempted to change the conversation, and influence his fellow Republicans, with one of the tactics he’s used so effectively throughout the 2016 campaign: leveling a thinly-veiled threat.

Here’s how it went, according to Politico:

Donald Trump demanded that Republicans unify behind his campaign on Saturday night, arguing that conservatives who don’t back his campaign should fear the consequences of a third-party bid.

In another boisterous victory speech-press conference combo, Trump called on Sen. Marco Rubio to leave the race and suggested that he might not even bother to campaign if the “#NeverTrump” movement challenges him in the general election. Such a move, he warned, would guarantee Hillary Clinton a chance to replace the late conservative justice Antonin Scalia.

“If they run a third party or an independent party, if they do that, it will make it impossible for the Republican candidate, on the assumption it’s me, to win,” Trump said. “The Democrats would have an absolute free run. Probably you wouldn’t even campaign because it would be impossible to win.”

Disingenuous as his concern for the fate of the Republican Party may be, Trump isn’t wrong.

If either anti-Trump Republicans or Trump himself were to run a third-party presidential campaign, the result would almost certainly be a Democratic Party victory. The GOP establishment knows this; it’s why they “made” Trump sign that silly loyalty pledge — the one that ties them to Trump as much as anything else — last September. It’s a real point of leverage Trump’s got on them, and he’s been all too happy to use it.

However potent a threat it may be, though, it’s unlikely that Trump will ever have to worry about making good on it. Because as my colleague Simon Maloy has noted already, if the Donald wins the party’s nomination, Republicans, despite their #NeverTrump bullshit, are overwhelmingly like to fall in line. And they’ll do so for at least two main reasons: partisanship and ideology.

The influence of party polarization and partisanship should be pretty self-explanatory. The GOP and the Democratic Party may be in a lot more agreement on some major economic issues than many voters would like; but their respective approaches to policy and governance are, overall, very different. (It’s hard to imagine someone who wants Paul Ryan running the House voting to put Hillary Clinton in the Oval Office.)

The role ideology plays in the Trump phenomenon, meanwhile, is a bit more complicated.

It is obvious by now that a large chunk of the GOP base couldn’t care less about the plutocrat-friendly economic policies of the conservative movement. They vote Republican due to “social” or “cultural” motivations instead. But as Vox’s Matt Yglesias recently pointed out, Trump’s rise suggests that if GOP voters must choose between libertarian economics and revanchist white populism, it won’t even be close.

Trump is winning because he understands that the 2016 race is about the very definition of America itself. For candidates like Rubio — following the pace set by Barack Obama and Hillary Clinton — it's about embracing a new, more diverse, more tolerant country. For Trumpers, it's precisely the opposite. They want to put the Obama genie back in the bottle and fight vigorously for the traditional notion of Americanness, at home and abroad, even if it means jettisoning some of the GOP donor class's ideological bugaboos.

It’s hard to deny, then, that the Trump worldview — “stand[ing] for American interests abroad while defending the traditional conception of the American nation at home,” as Yglesias puts it — is the real ideology of the Republican Party. At the very least, it’s the real worldview of enough Republicans to form a controlling plurality (same difference). So why wouldn’t Republicans fall in line?

The answer, in short, is that this is the wrong question. Because Trump’s “threat” wasn’t directed toward actual Republican voters. (They seem to quite like the Donald, all things considered.) The real targets of the threat, rather, were the very same establishment figures who were shocked — shocked! — to find that most GOP voters didn’t care about eminent domain or the tenets of William F. Buckley.

They’re the ones Trump is warning to get aboard the bandwagon before it’s too late. And since the only other option would be to head off into the wilderness — via either forming a third party or, gulp, becoming Democrats — I’m guessing they'll do just that.