ISIS has massacred almost 200 Iraqis in the past week, while Western countries turn away refugees 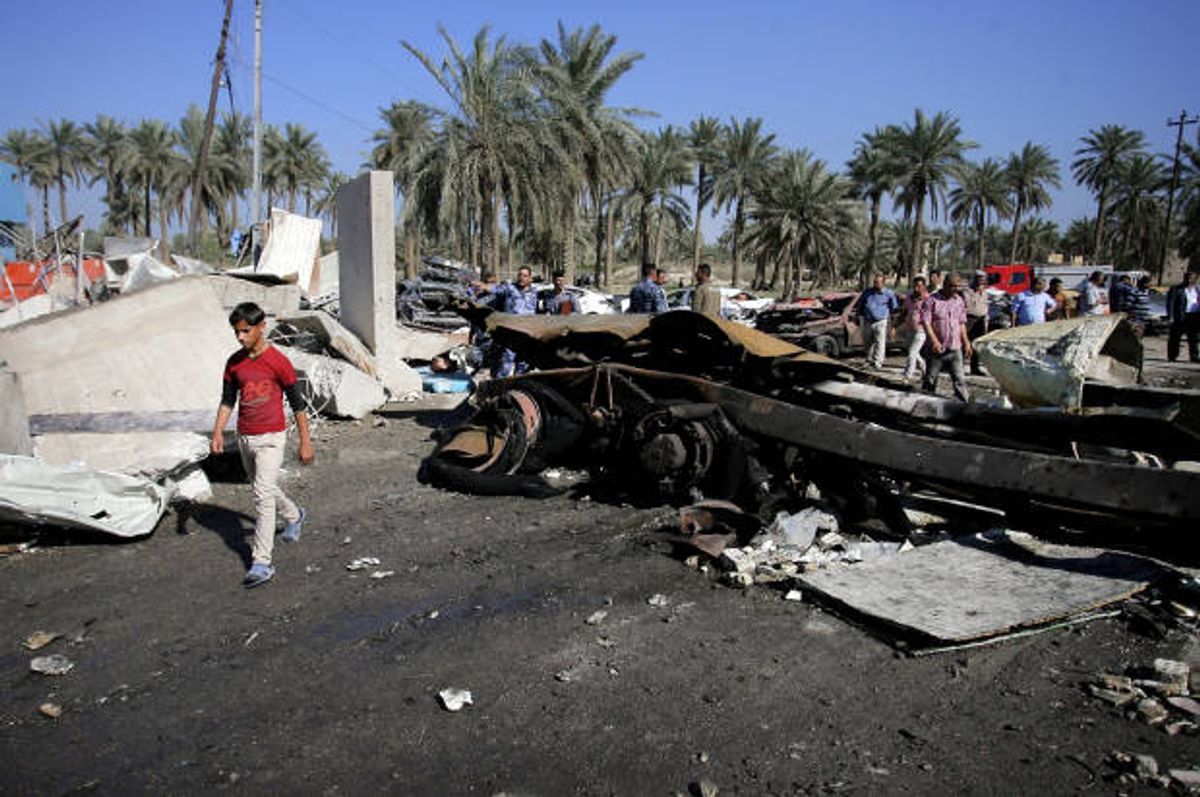 The scene of an ISIS suicide bomb attack in Hillah, south of Baghdad, Iraq, on Sunday, March 6, 2016 (AP/Anmar Khalil)
--

Almost 200 Iraqis have been massacred by ISIS in the past week, the majority of whom were civilians from the Shia Muslim religious community.

A suicide bombing in Hillah, south of Iraq's capital Baghdad, on Sunday killed at least 61 people and injured another 95, the AP reports. Of those killed, 52, or 85 percent, were civilians. The remaining nine victims were Iraqi security forces. Another eight people are missing.

ISIS took credit for the attack in an online statement.

The United Nations forcefully condemned the bombing. "Once again the terrorists strike with untold savagery, leaving a trail of death and destruction," remarked Special Representative of the Secretary-General Ján Kubiš, calling ISIS' actions "crimes against humanity."

"This latest atrocity committed by a suicide attacker driving a vehicle packed with explosives targeted a busy roadblock near Hilla as cars queued for security checks," he explained. "It was clearly intended to exact maximum casualties among civilians."

This was the fourth large bombing of civilian areas claimed by ISIS in the past week. Many of ISIS' attacks are targeting places with concentrated populations of Shia Muslims, whom the Sunni extremist so-called Islamic State considers to be heretical.

On Feb. 29, ISIS massacred at least 40 people and wounded 58 more in a suicide bombing at a funeral east of Baghdad.

In another attack on the same day, ISIS killed eight members of the Iraqi security forces.

Just one day before, ISIS slaughtered 78 Iraqis and wounded at least 100 more in a double suicide bombing in a Shia-majority neighborhood in Baghdad. This Feb. 28 attack was the deadliest in the Iraqi capital so far in 2016.

In these four attacks, at least 187 Iraqis were killed and at least 253 were injured, the majority of whom were civilians.

Moreover, a few days before, on Feb. 25, ISIS bombed a Shia mosque in Baghdad, killing another 15 people.

As Salon highlighted in a recent article, in the horrific November 2015 Paris attacks, which were also claimed by ISIS, 130 people were killed.

After the massacre, the world virtually stopped in universal mourning. Heads of state from around the world pledged action against ISIS. Facebook encouraged its millions of users to put a French flag in their profile pictures in a sign of symbolic solidarity.

There has been exponentially less international outrage over the almost 200 Iraqis slaughtered by ISIS in the past week in sectarian attacks on civilian areas, on the other hand.

And this is not even to mention the 670 Iraqis — almost two-thirds of whom were civilians — who were killed and additional 1,050 civilians who were injured in February, according to the United Nations; or the 849 Iraqis killed and 1,450 injured in January.

ISIS was also responsible for most of these casualties, bombing places of worship, markets and funerals, in what the U.N. called "vicious" attacks.

Meanwhile, the West and its autocratic allies in Gulf are turning away refugees who are fleeing this violence and brutality. There are approximately 4 million internally displaced Iraqis, according to the U.N. refugee agency, and another almost 400,000 external Iraqi refugees.

The international community has largely — and understandably, given the enormity of the crisis — directed much of its attention to Syrian refugees, of which there are more than 4 million. At the same moment, nevertheless, Iraqi refugees, who are fleeing similarly vicious violence and extreme sectarianism, have gotten short shrift.

Syrian refugees have faced obstacle after obstacle. Many European countries have failed to even come close to accepting the number they pledged to host. France just destroyed one of its largest refugee camps, at Calais.

The U.S.'s response has been even more pitiful. The Obama administration has admitted just 841 Syrian refugees, five months after the White House promised it would take 10,000 in the next year — and as Republican presidential candidates openly call for banning their entry (or at least the Muslim ones).

Furthermore, Western-allied Gulf regimes, the richest countries in the Middle East, have taken no refugees.

While Syrian refugees endure hardship, however, Iraqi refugees are barely on the radar — Afghan, Libyan, Sudanese and Kurdish refugees even less so. And ISIS continues to create more and more of such refugees, as it bombs civilian areas.

The latest string of ISIS massacres should serve as a stark reminder that Muslims are the biggest victims of ISIS' brutality, yet they get much less attention, let alone solidarity.