Let's get rid of Annapolis: Our military academies screw taxpayers and the students -- and serve only the powerful brass

The Naval Academy runs on lies and hype -- it's nepotistic, mis-serves its students and fails to produce officers 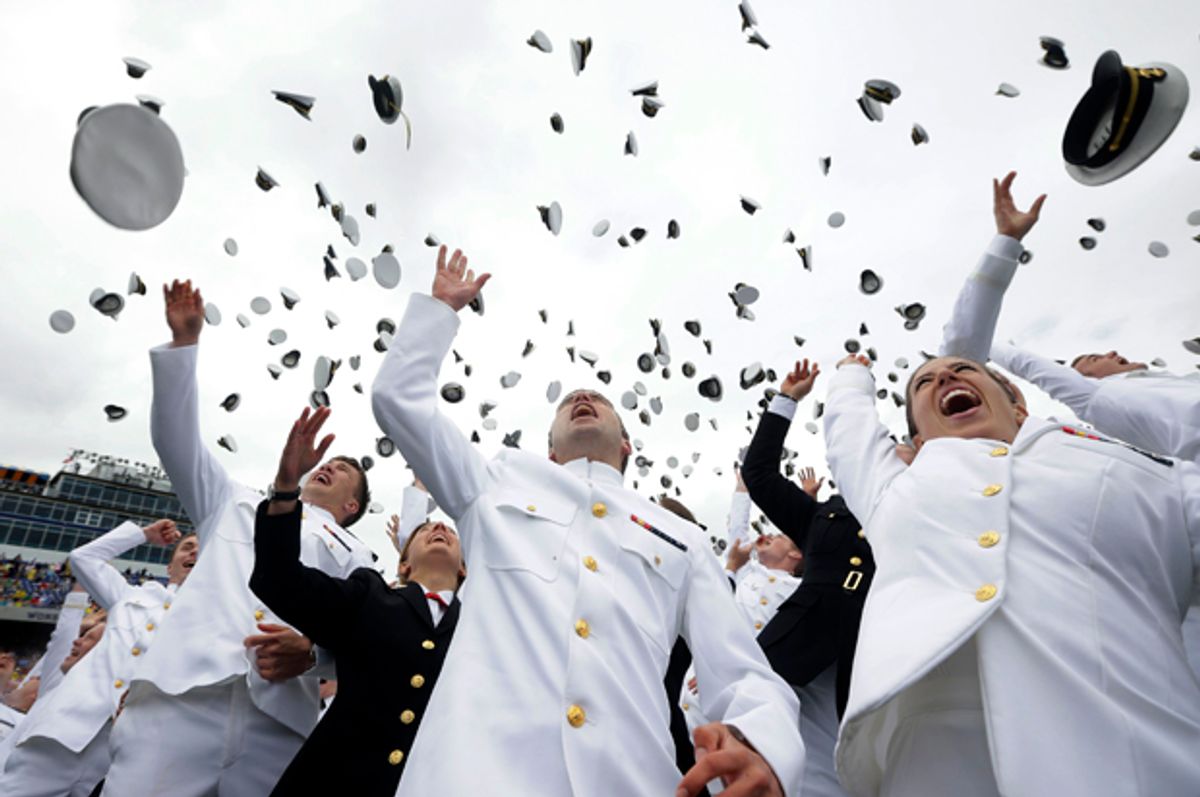 Members of the graduating class of the United States Naval Academy in Annapolis, Md., May 24, 2013. (AP/Pablo Martinez Monsivais)
--

The official website of the U.S. Naval Academy in Annapolis, Maryland, where I’ve taught for 29 years, has the phrase “Leaders to Serve the Nation” right under the name of the institution. This phrase is also on the flags that now embellish our campus. But what are “leaders” and what does it mean to “serve the nation”?

USNA graduates fewer than one in five new Navy officers and an even smaller percentage of new Marine officers. These cost taxpayers about half a million dollars each, four to eight times other commissioning pipelines, which have been beefed up in recent decades. Students at all service academies receive what Ben Carson called a “full scholarship” at taxpayer expense, plus room, board and free-to-them medical care (including orthodontia, PRK and repair of athletic injuries). The Boston Globe found that only about half the recent graduates of our sister school USMA/West Point (another four-year institution) stay in longer than their five (!) year payback period. No evidence suggests that USNA is different, despite the institution’s mission to “graduate leaders dedicated to a career of naval service.” Apparently five years is enough to constitute a “career.”

And what is a “leader”? Nobody ever says. Apparently it doesn’t mean a physicist, or a good architect, or a poet—we graduate very few of those. My best guesstimate as to what USNA thinks a “leader” is, is a charismatic person with no actual skills except the ability to sway people to his/her will. Those, of course, can do evil as well as good: Iran and North Korea have “leaders” too. We let in students for many reasons that have nothing to do with charisma, including recruited athletes—and we don’t test for “leadership” of any students. Do more “leaders” come from USNA than elsewhere? Proof, please.

It’s all smoke and mirrors run for the benefit not of the civilians who pay for it but the military brass, whose vanity projects these institutions are, and who hook each other up once out. Remember that this is the military, not academia or a free market of ideas. Everything you hear about the service academies comes from the CO in the front office, where the weather is always sunny. Administrators at USNA have all made their careers from being graduates (all superintendents have been USNA graduates and most of the higher administrators)—it gave them a free education and employment, after all, and a network afterward. The military students (their rank is “midshipman,” which we hear is about to become gender-neutral) cannot legally talk back, or take exception in public. The fox says the henhouse is doing fine; the hens can’t even cluck. It’s a fabulous system to keep those tax dollars rolling in. Proof, please.

It’s the parents of midshipmen who, I find, really hate professor Fleming. Read the parents’ forum online. I can see why. They have lucked out: zero college costs for them or their children in a country where college debt has surpassed consumer debt. And guaranteed employment at the end. And all that hype-fueled prestige. Pretty sweet. Nor can anyone ask about the blatant nepotism of the admissions process: the children of many sitting and past administrators have been awarded “full scholarships” (20 percent with a remedial 13th year of high school “in the military” thrown in). Those with parents on active duty or siblings at other government military giveaway institutions also get preference: those who have get more; the military is taking care of its own. I tried three times to find out about admissions policies with FOIA requests—blocked three times. The military brass wants to spend your money with no oversight.

The service academies aren’t the military. Our students, after four years, become one-fifth of new officers; officers are only 10 percent of the military. It’s the enlisted 90 percent who actually drive the ships, or go on most SEAL missions, or in harm’s way. (Chris Kyle was an enlisted SEAL, not an Annapolis graduate.) Back when almost all officers went to Annapolis, of course almost all of these came from USNA, and so did almost all of the admirals. That’s no longer true, but because of averages over history, the institution likes to suggest to its students that coming to USNA today gives them a leg up on making admiral—or being an astronaut, because the first generation of astronauts were Navy pilots. Proof please, not more hype.

Taxpayer dollars let the brass live like kings on our campus for a few years in beautiful Victorian-era houses with government-paid staff and groundskeepers. Do civilians get anything in return for their investment in these military-run colleges? (They didn’t start as colleges, but as 19th century training institutions back when college was Greek and theology for gentlemen. Now every school offers engineering, and typically students pay for it.) Sure, about a thousand new Navy and Marine officers a year, a small fraction of the whole. Are they the best officers? The alumni among the Navy brass, who use our campus for its retirement ceremonies (and funerals), say they are: The students are told weekly they are “the best and the brightest.” By what criteria? That’s never specified: because we say so. (Our SAT scores are below those of our state university, and we never test for “leadership.”) Proof please.

USNA is run on a combination of lies and hype. Lies because USNA is not in fact anywhere near as selective as the brass says it is. USNA counts high school students who apply to a week-long summer seminar as “applicants” to the academy, and against USDE rules, also count incomplete applications (if you sign in to the website to start an application, you have applied for the purposes of USNA definition). Hype because nobody ever asks for justification of assertions about “best” or “brightest” or “leaders.”

Civilians are paying our students, whose job is civilian defense, to learn—what exactly?

* That military discipline is the result of personal whim of the authorities—so be careful, not moral

* That it’s all about our (currently winning) football team. Attendance at home games is a military obligation, and if the team wins, you get liberty. (By the way, West Point’s football team isn’t currently on a winning streak: does that mean USMA graduates are worse officers?)

The real military actually has a purpose, and enlistees are by and large treated like adults. At Annapolis, our purpose is to put on parades for tourists, and midshipmen have no real responsibility. Four years or USNA, according to my experience with the thousands of students I’ve taught, makes them less motivated for military service than when they began, counting the days until they are set free. They’d be better off going to college and joining the military afterward.

We need a strong military. We also need doctors, lawyers, teachers, plumbers, electricians—and maybe even English professors, like me. What other job (the military is voluntary) gets taxpayer dollars to give full college scholarships, food, clothes, lodging and healthcare to those who want to do it for five years? Why is the military given billions of dollars to run self-serving colleges (one per individual service!) that teach their captive students the wrong things?

Send them all to the many colleges that offer ROTC or to OCS after, and take the money away from the brass for their military theme park now largely running on the fumes of its past. Leaders are born, not made; at most leadership can be modeled, not taught, and the military doesn’t have a monopoly on “leadership.” The buildings at Annapolis are pretty and can be used, like Britain’s Sandhurst, now out of the undergraduate education business, for training, which is what the military is good at. Not education. Education expands the mind; training shows you how to do something specific. The military doesn’t want creative thinkers, it wants people saying “yes sir/ma’am.” Most students who come for “free college” realize this eventually, and it makes them cynical and unmotivated.

Why should taxpayers continue to pay for students who learn the wrong things and who disdain the very people they’re supposed to defend? The USNA-graduate admirals say things are fine. So do parents who don’t have to pay for their kids’ college. How about the people who aren’t on the gravy train?

Bruce Fleming has been a professor in the English Department of the U.S. Naval Academy since 1987. The author of Annapolis Autumn, Why Liberals and Conservatives Clash, and numerous other books and articles on a wide range of issues, he has received an O. Henry short story award and the Antioch Review Award for Distinguished Prose, a career award. He is also a regular columnist with military.com. A native of Maryland’s Eastern Shore, Fleming lives outside of Annapolis with his family.