Nancy Reagan's anti-feminism might be her most lasting legacy

Nancy Reagan framed women's inequality as a "choice," a rhetorical move which undermines feminism to this day 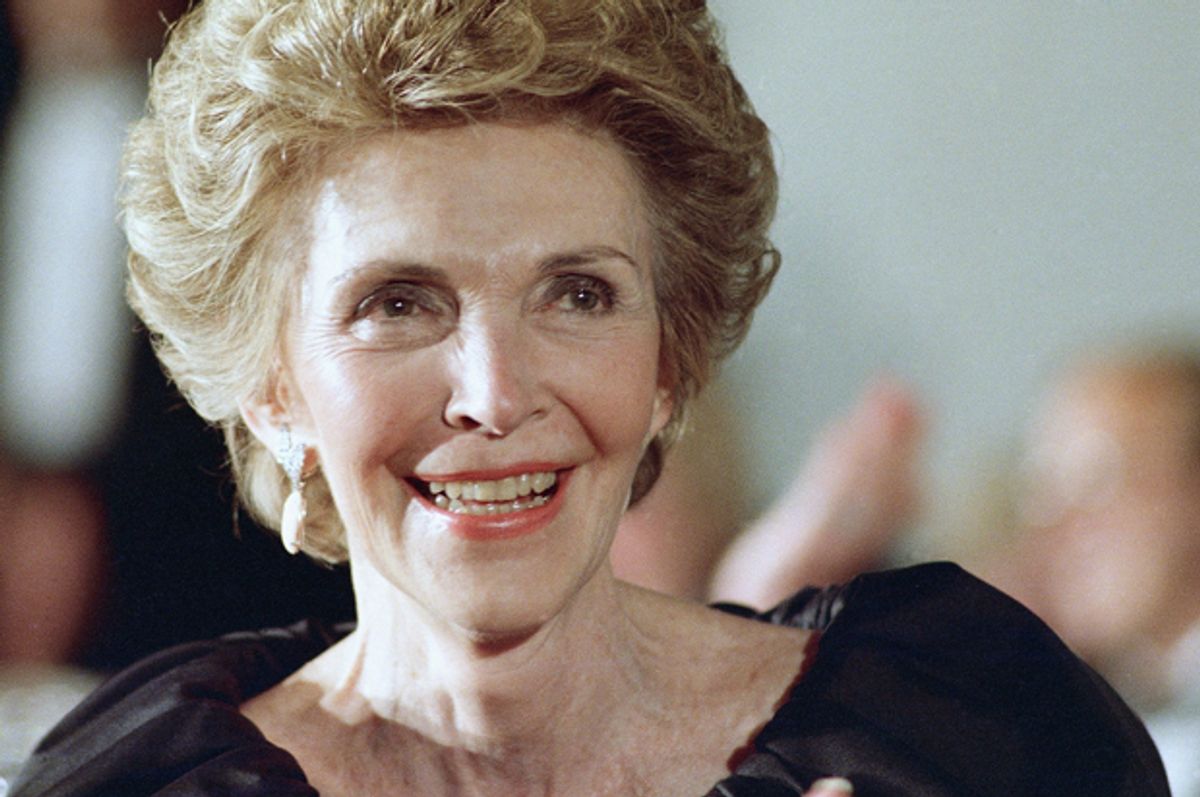 Former first lady Nancy Reagan died at age 94 on Sunday. She will be remembered, above all other things, as an almost too-perfect symbol of the weirdness that was the 1980s, when her husband Ronald Reagan was president. She ran the "Just Say No" campaign against drugs while allegedly being a pill enthusiast herself. She sat in Mr. T's lap. She and her husband campaigned against welfare by implying that recipients are freeloaders, but threw a fit when they were told that they had to pay for their own food and toiletries while living in the White House. Nancy Reagan unapologetically embraced a love of luxury and money, making her the perfect first lady for the "Lifestyles of the Rich and Famous" era.

She was also the perfect icon for the '80s-era backlash against feminism, as well.

As Susan Faludi chronicled in the instant classic of feminist history, "Backlash: The Undeclared War Against American Women." the '80s was an era where many of women's gains under feminism, from reproductive rights to more investment in public life, were under assault from both the government and the culture at large. A big part of this backlash was the rise of the "feminist" anti-feminist: Conservative women who carved out careers and names for themselves — traditionally feminist goals — by attacking feminism. Women like Phyllis Schlafly and Beverly LaHaye accumulated power and got out of the house by telling women their place was inside of it, and the conservative movement generally realized that one of the best ways to attack feminism was to get women to do it.

In many ways, Nancy Reagan was at the heart of the anti-feminist backlash. On one hand, she was an undoubtedly powerful and influential woman who had  a great deal of influence over her husband's views and career, making hiring decisions for his campaigns and running the damage control initiative after the Iran-Contra scandal.

On the other hand, she was, both in word and deed, a role model for the idea women are meant to be helpmeets for men instead of heroes of their own stories. She threw her weight around but refused any public credit for it. "Mrs. Reagan did not wish to detract from her husband’s luster by appearing to be a power behind the presidential throne," Lou Cannon of The New York Times writes in his obituary.

"In public, she gazed at him adoringly and portrayed herself as a contented wife who had willingly given up a Hollywood acting career of her own to devote herself to her husband’s career," he adds.

Reagan was, no doubt with full self-awareness on her part, a living rebuttal to the past two decades worth of feminist writing and activism that asserted that it was oppressive to women to be expected to be meek little wives who live only to serve their men. Betty Friedan, the author of "The Feminine Mystique", called Reagan "an anachronism" who denies "the reality of American women today and what they want to be".

Reagan, in turn, helped shape what would become one of the most potent weapons of the anti-feminist backlash: Portraying feminists as oppressors and bullies that would deny women their supposedly biological desire to live submissive lives devoted to husband and children.

"Feminism is the ability to choose what you want to do," Nancy Reagan told McCall's in 1985, exploiting the rhetoric of the pro-choice movement to undermine feminism.

It was — and is — a pile of nonsense. Feminism is a movement to secure women's equality to men, not a self-help movement here to validate every "choice" as equal to every other. Unfortunately, this rhetoric, which was satirized on "Sex and the City" as with the iconic "I choose my choice!" scene, has become the go-to narrative to justify women's continuing inequality at work and home. Whenever issues like the pay gap or the housework gap come up, inevitably defenders of the sexist status quo will rush forward to deny that discrimination is the cause and instead argue that women are simply choosing to make less or do more housework than men. Never mind that women are under a lot more pressure to "choose" to clean more or work outside the home less than men. We are expected to pretend these "choices" are made in a vacuum.

The truth is that Reagan was part of a conservative women's movement to valorize inequality as somehow good for women and truer to their inherent nature. Reagan openly expressed distaste for the idea that married women should work and bragged about only having to take on paying job during her entire marriage to Ronald. Historian Carl Anthony of the National First Ladies Library told USA Today that Reagan's "single most defining public role was 'helping my husband,' " which puts her in stark contrast with other first ladies like Hillary Clinton or Eleanor Roosevelt, who used the role to carve out their own identities as policy makers and activists.

It's arguable that Nancy Reagan, with her relentlessly adoring gazes aimed at her husband and her outspoken belief that wives should serve their husbands, is a major reason that Ronald Reagan was able to win over so many Christian conservative voters despite his Hollywood past and his previous marriage. While the religious right as we know it formed to support the pro-segregation movement, by the late '70s, they had turned their attention mostly to the project of undoing feminist changes, by resisting the Equal Rights Amendment and trying to end legal abortion.

Nancy Reagan was the perfect symbol of what the religious right thought women should be: Dutiful housewives who only try to influence the world through their husbands and never for themselves. Considering that the last Republican president, Gerald Ford, had a surprisingly feminist wife who supported the Equal Rights Amendment, Reagan had to have felt like a lifeline for religious conservatives at the time. Finally, the White House was being occupied by Republicans who believed in traditional gender roles.

More than anything, anti-feminism might be Nancy Reagan's most lasting legacy. Her anti-drug programs have been exposed as a joke and have even been linked to higher rates of substance abuse. While she was able to push her husband towards being slightly less hostile to AIDS victims, she will almost surely be better-remembered for refusing to help her supposed friend Rock Hudson when he was dying of the disease. (And she allegedly laughed at a Bob Hope joke about Hudson's illness.)

But her brand of anti-feminism, which posits that inequality is little more than a freely made "choice" women make, continues to be a powerful force, fueling conservative arguments against feminism and feeding continuing pressure on women to step back and live lives in the shadows of their husbands.