The Feelies on “the awkwardness of trying to break through” 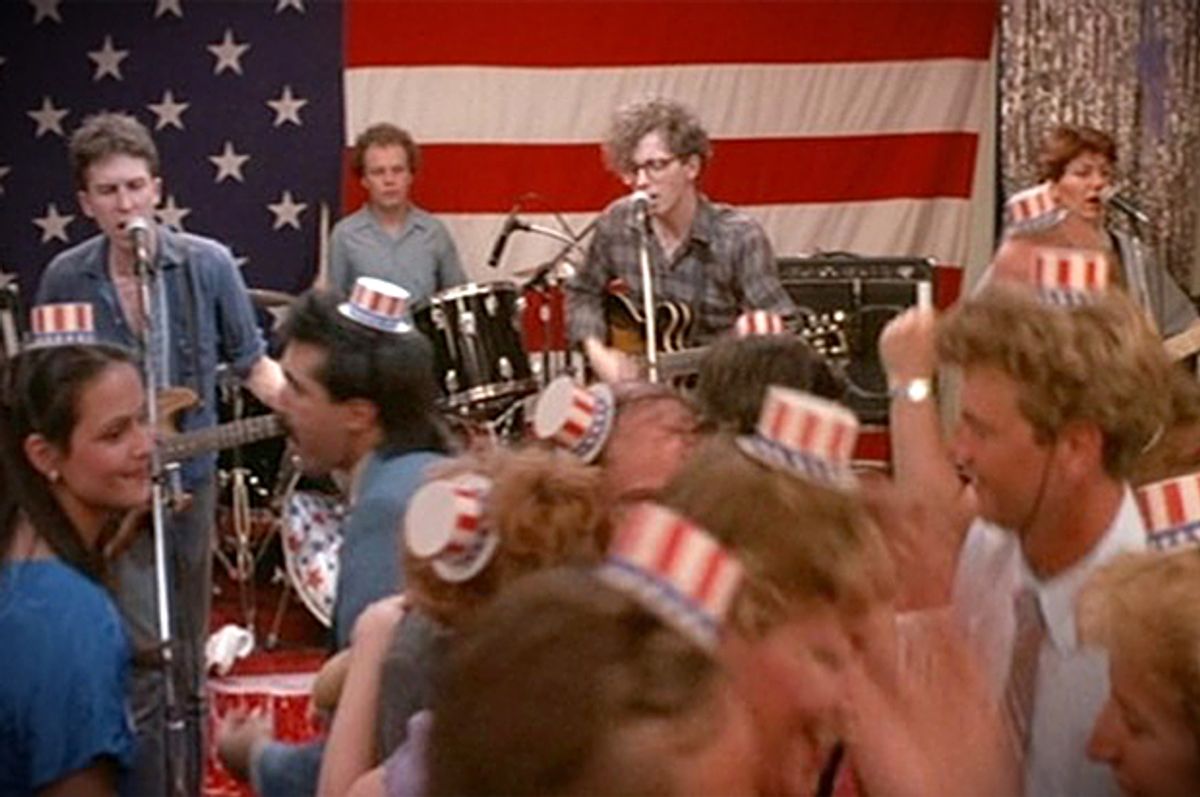 The Feelies perform in "Something Wild" (MGM Studios)
--

The strange and unpredictable course of rock history means that Nirvana exploded in 1991 and made it possible for raw, eccentric, and experimental bands to get a wider hearing.

For indie-rock fan, that meant years of bounty. But it also means that a number of groups came along a little too early to get swept up in the maelstrom of signings that followed “Nevermind.” One of them was The Feelies, the New Jersey group that released four albums and broke up without stretching much outside a cult. (Anyone who saw their live shows, which were originally infrequent, will never forget their intense style: “When they did perform, they pushed the rock 'n' roll basics - two or three chords, an unswerving beat - toward the ecstatic,” Jon Pareles wrote in the New York Times. “They defined those few chords with intricately interlocking parts, bearing down on them to turn repetition into a frenetic rave-up.”)

The group, as a result, has a kind of innocence around it, which hasn’t been diminished by getting back together in 2011 to released an album, “Here Before,” and some accompanying live shows.

The Feelies’ third and fourth records, “Only Life,” from 1988, and “Time for a Witness,” from 1991, are now being reissued by Bar/None, each with four bonus tracks. (Most of the new songs come from a farewell show at Hoboken’s legendary club, Maxwell’s, which served as Feelies headquarters.)

Salon spoke to the band’s lead singer and guitarist, Glenn Mercer, from his home in New Jersey, about the influence of Lou Reed, the band’s past and future, and how these records helped split up the band. The interview has been lightly edited for clarity.

What do those two albums mean to you guys? Were you getting a bigger budget, a bigger following? What stage were you at as a band when “Only Life” and “Time for a Witness” came out?

We were signed through our label, Coyote, to A&M, so were moving a little bit more mainstream. In general, the whole alternative – did they call it that then? – scene was becoming more popular. There was the potential to be on the radio, to sell more records. The overall sound of popular music was changing. There was the possibility that the band would take that next step, go to that next level. So we were pretty optimistic.

It was before Nirvana, but there was still a sense that this off-the-mainstream music could break more widely.

Yeah – it’s almost like there was an arc to it between those two albums. I saw the arc peaking, and then it went down from there.

When I think back, I think of bands that were kind of at our level – peers of ours – and we all signed to majors about the same time. And then we all shortly thereafter broke up.

What were some of those other bands?

Some of my favorite bands from high school!

Did it seem like you guys were trying to break through and it didn’t quite work?

It’s kind of a complicated story. The main element is that A&M, between those two records, had gotten bought or merged or some corporate event happened that swept the old people out the door.

A bunch of new people came in, and the relationships we’d established with “Only Life” were gone, the people who came in didn’t really know the band, didn’t have much respect for us. We found that we were working harder, weren’t making any more money; every time we tried to go to another level we had to spent more money, get a bigger crew… We had the same amount of people in the crew that we had in the band, so traveling became expensive… The economics of it were a major factor.

Did these records lead to the band breaking up, then? The group split when [guitarist] Bill Million took off, right?

It was a lot of frustration. Bill couldn’t afford health insurance…. Just the feeling that we were knocking ourselves out and just treading water, not going anywhere really.

You probably had bigger crowds at clubs than ever before, though?

What about musically? How were these records different than, say, “The Good Earth” [the pastoral 1986 album produced by R.E.M.’s Peter Buck]?

All of our records are different from each other. We made a slight concession when we made “Only Live” in that we allowed the co-producer a little bit more say in how the record came out… We kind of felt with [“A Time for a Witness”] that we wanted to have a little bit more control over the sound again.

Also at the time, it was right on the cusp of Nirvana. Overall, the heavier guitar sounds were starting to become popular, distortion… Particularly the Neil Young record, “Ragged Glory” – we were very into that at the time. His playing with Crazy Horse, the big guitar sound… So we thought, “We tried to make a radio-friendly record – let’s just do what we want to do now.”

A lot of those songs came about because of jams we were having, which were more frequent because we had all basically stopped any other work, made this our full-time thing…. We went back to the basement – I think some of the songs reflect that – the stretched-out jam feel of them.

One thing those albums had in common with the earlier Feelies records is that your singing was compared to Lou Reed’s a lot. Did that drive you crazy?

Just a little. I think Lou was a good singer. People make statements without really thinking about it: If you were really to examine it, you’d see that Lou Reed has so many different styles of singing – what exactly were they referring to? He could be really melodic, and then it became a talking thing, or a laid-back thing…

Iggy was a big influence, Dylan… I think it’s the overall tone of the band – we were inspired by the Velvet Underground. You could compare the drumming to Mo Tucker, but nobody ever does that.

You guys covered VU’s “What Goes On” on “Only Life,” and you have a cover of “After Hours” in the bonus songs … How important was that band to you guys when the group was forming?

Well, we liked a lot of bands. When Bill and I met, it was more the Stooges, and then the Velvets… But so many bands, who we’ve also covered, like the Beatles and the Stones… We did a Stooges song on the “Time for a Witness” record.

So what are the Feelies up to these days? What’s the future of the band like?

Can you tell us a little about the new album?

That’ll probably be out in the fall… We really took our time – it was a two-year effort… I guess we got the idea of trying to stay more closely to the way our demos cone out. So we recorded here at my house, and locally with an engineer… It’s very eclectic, a little bit experimental… We just wanted to be relaxed about it, really – to not have the pressure of being in a studio and having a deadline.

Sounds like we can look forward to more Feelies shows with the new album, then.

Definitely. We’re probably going to do a 40th anniversary concert with some surprises.