The #NeverTrump farce: Hypocritical Marco Rubio shows how Republicans will learn to like Donald Trump 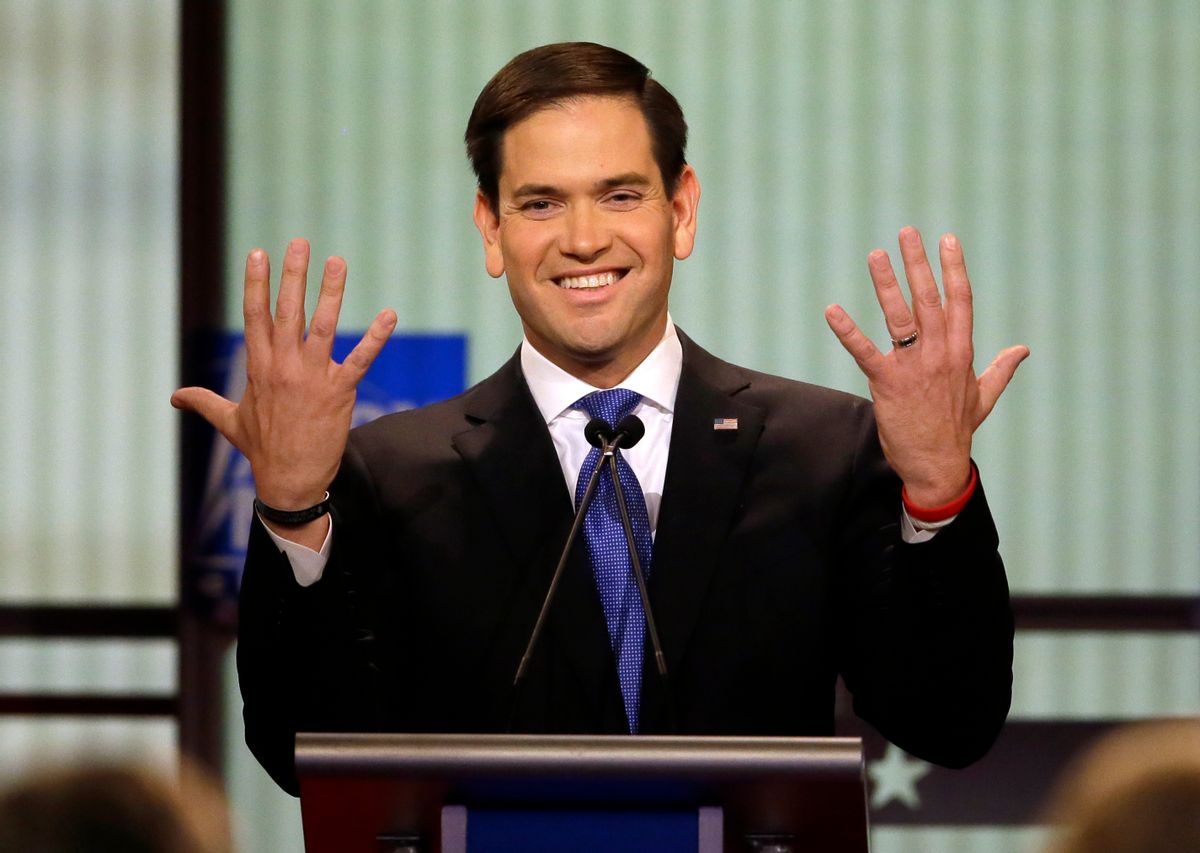 The anti-Donald Trump within the Republican Party have a compelling and indisputably accurate case to make against their own presidential frontrunner. He’s an unprincipled goon, an ignorant clod, a preening jackass, an authoritarian lout, and he has tiny little sausage fingers. He’s manifestly unqualified for the presidency and is a conspicuous threat to use the considerable power of that office in ways that are dangerous, illegal, and morally reprehensible. To support Trump, they argue, is to vote for American decline. And they condensed the entirety of the anti-Trump case down into a single hashtag: #NeverTrump.

There are many problems with the #NeverTrump movement – namely, it’s based on a hashtag, and hashtags are annoying and dumb marketing gimmicks. But as the New Yorker’s John Cassidy writes, one of the most significant obstacles facing the #NeverTrump people is that they have no champion. The most prominent political figure who comes closest to embodying the #NeverTrump ethos is Mitt Romney, but he’s a charmless stiff and also isn’t in a position to directly challenge Trump’s path to the Republican presidential nomination. Among the candidates who are actually vying with Trump for that prize, the commitment to the #NeverTrump cause isn’t exactly firm.

Let’s take Marco Rubio as an example. The Florida senator has positioned himself as the most aggressive Trump critic among the remaining candidates, and he even subscribes to the #NeverTrump lifestyle – his Twitter account promotes the hashtag, and his campaign store sells crappy merchandise emblazoned with #NeverTrump in large block letters. Based on all that, you’d think that Rubio is firm in his hashtag-based pledge to never, ever support Donald Trump under any foreseeable circumstance.

Well, not so much. Here’s a snippet of Rubio speaking on a Kentucky sports radio show last week, where he was asked about his support for #NeverTrump and his statement at the most recent debate that he’ll “support Donald if he’s the Republican nominee.”

Here’s the transcript of what Rubio said:

RUBIO: For me, I’m never voting for Donald Trump in the Republican primary, I mean, and I don’t think—

HOST: Well, but you’re running in the Republican primary.

RUBIO: That’s the point that I was making. But let me just say this: I get it, what you’re asking me. I get the question. And I think what it opens our eyes to is – think about that. If it was anybody else in first place right now, we would not be asked this question. I mean, you don’t see Bernie Sanders being asked “would you vote for Hillary Clinton?” If the frontrunner was me or anybody else in this race, you wouldn’t have people asking that question.

“My answer’s a reflection of how bad I think Hillary Clinton is,” Rubio continued. “But I don’t want us to reach this choice here where it’s Donald Trump or Hillary Clinton.”

This answer is complete nonsense, and it reveals a fatal weakness in the #NeverTrump mindset. Look at how Rubio set up his support of the #NeverTrump movement. He cast Trump as a singularly dangerous and unqualified candidate, someone who is so uniquely bad that people are going to these extreme lengths to stop him. A Trump nomination would leave his party “fractured,” Rubio said, along with the conservative movement that supports it. At the debate he viciously mocked Trump for having little to no knowledge of foreign policy. He said that Trump is trying to “con people into giving them their vote.” On the campaign trail he compared Trump to Kim Jong-Un, calling him “a lunatic trying to get a hold of nuclear weapons in America.”

But Rubio’s still going to vote for this dangerous lunatic con man who will destroy his party because he’s not as bad as Hillary Clinton?

What we’re seeing in the #NeverTrump movement is a collision of two seemingly irreconcilable forces within the GOP and the conservative movement: the right’s all-consuming hatred of the Clintons, and its revulsion to the very notion of nominating Trump. Hillary Clinton is obviously far more qualified to be president than Donald Trump is, but conservatives have been coached over the past couple of decades to view Hillary Clinton as a depraved hellspawn stalking the earth in human form. So for Republicans like Rubio, it comes down to Trump by default, because anything that aids Hillary Clinton is automatically the greater evil.

And that’s why I don’t think the #NeverTrump movement will last if Trump wins the nomination. Yes, they hate him now, but at the point that Donald Trump becomes the only thing standing between the country and President Clinton, a lot of conservatives quickly rediscover how critically important it is to vote Republican.