The comedian is eloquent in places, but operates under the assumption that meeting in the middle will save America 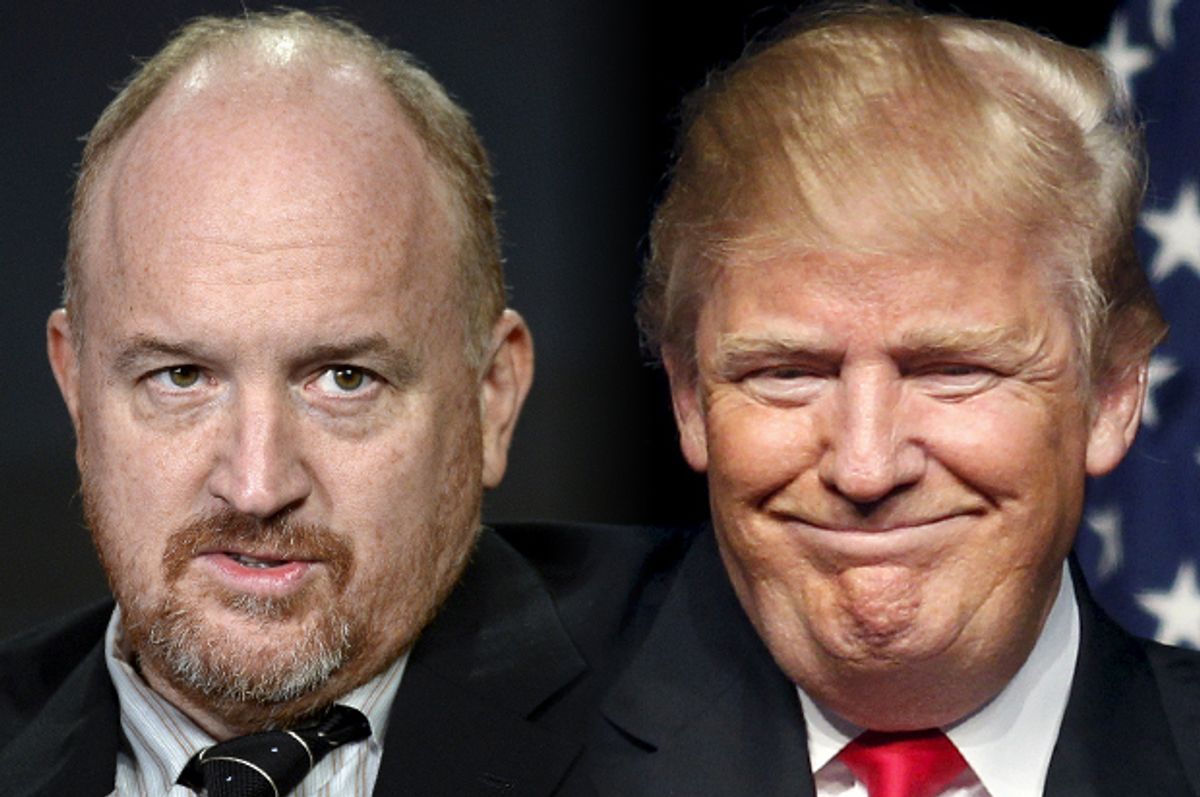 These days, it sounds retro and outdated, but political figures used to talk about bringing the nation together. There was an assumption, implicit in the motto of the United States – e pluribus unum, “out of many, one” – that the whole country shared values and assumptions; that when a threat, internal or external, materialized, we’d find a way to meet in the middle to join hands and repel it.

A lot of us like the sound of that. But does it really work in the 21st century?

This is something much of the country is trying to figure out as Donald Trump inches closer and closer to the Republican nomination: Can we – on the left and the right – put aside our differences and stop this demagogue? Isn’t the difference between a Marco Rubio and a Hillary Clinton, say, just hair-splitting compared to the prospect of electing a guy who trades in bigotry and hatred?

That's the idea behind Louis C.K.’s weekend plea, attached to an announcement about his web series “Horace and Pete.”

“The guy is Hitler,” C.K. wrote in a long, impassioned email. “And by that I mean that we are being Germany in the 30s. Hitler was just some hilarious and refreshing dude with a weird comb over who would say anything at all.”

In its neurotic, scattershot way, C.K.’s letter is powerful: It’s funny, deeply felt, and often persuasive. (Let’s not be too harsh on its contradictions: He’s not a political columnist, but a frightened citizen.) And asking voters to take a good look at Trump and his policies, as C.K. does, makes an immediate sort of sense.

This passage, for example, is in some ways the heart of his argument:

If you are a true conservative. Don’t vote for Trump. He is not one of you. He is one of him. Everything you have heard him say that you liked, if you look hard enough you will see that he one day said the exact opposite. He is playing you.

This, however, is the part people will be chewing over for the next few days:

And I’m not advocating for Hillary or Bernie. I like them both but frankly I wish the next president was a conservative only because we had Obama for eight years and we need balance. And not because I particularly enjoy the conservative agenda. I just think the government should reflect the people. And we are about 40 percent conservative and 40 percent liberal. When I was growing up and when I was a younger man, liberals and conservatives were friends with differences. They weren’t enemies. And it always made sense that everyone gets a president they like for a while and then hates the president for a while. But it only works if the conservatives put up a good candidate. A good smart conservative to face the liberal candidate so they can have a good argument and the country can decide which way to go this time.

The problem with this is the same thing that’s wrong with David Brooks’s anti-Trump columns, and similar arguments by others who try – in most cases, with good intentions – to seek consensus against extremism. Here’s a Brooks column in which he tied the candidate to a movement toward anti-politics.

People say that Trump is an unconventional candidate and that he represents a break from politics as usual. That’s not true. Trump is the culmination of the trends we have been seeing for the last 30 years: the desire for outsiders; the bashing style of rhetoric that makes conversation impossible; the decline of coherent political parties; the declining importance of policy; the tendency to fight cultural battles and identity wars through political means.

Brooks is largely on target here, as is C.K., as far as their arguments go.

But both of them overlook something important: People on the left, the center, and the center-right may agree that Trump is nasty, hateful, and all the rest. But voting for a “reasonable” conservative candidate is not going to make reactionary extremists any less likely.

These reasonable conservatives brought us the gerrymandering that has strengthened the Republican infrastructure, squashed minority voting, and allowed extremism to thrive. They’ve led to a relaxing of media ownership laws that allowed the right-wing echo chamber to grow and flourish. Non-crazy, pro-Wall Street Republicans helped destabilize the middle class and fueled Trump's rise. Regular old conservatives opened the door to the appointment of judges that gave George W. Bush the presidency in 2000; and with Scalia's death, the next president is likely to shape the Supreme Court profoundly.

And while today, with Nancy Reagan’s death, the national conversation is bathed in the glow of Reagan-era nostalgia, it's worth remembering that the idea that government is a threat to the American way of life -- an idea Trump has run with -- does not originate with Trump: It’s in our political discourse today because of the way Ronald Reagan brightened up Goldwater for the mainstream.

Do a lot of us miss the old Eisenhower- and Rockefeller-style Republicans? Sure. And I'll concede: There are responsible and reasonable conservatives out there. (Some of them are my friends.) There are also corrupt liberals and lefties with bad ideas.

But the support for Trump is not coming from a fringe of the GOP, but from the center of its electorate. And these people know what Trump is talking about – he’s made speeches, put on enormously well-attended rallies, and hardly been shy in explaining himself in debates. Louis C.K. urges people to take a look at the reality of Trump’s politics, but the real-estate tycoon has gotten far more media attention than any other candidate: He’s not keeping his views a secret.

A lot of people on the left will assail C.K. for the false equivalency of his message. That’s not fair either. His is a smart, morally engaged response to an obnoxious candidate. (The comedian may be especially disturbed – as he should be! – by Trump’s plan to open up libel laws. This is a place where comedians and journalists should each shudder a bit.) But while it's nice to imagine a world of civility, where people who disapprove of race-baiting and extremism could find a consensus, and shut down a candidate who's motivated by hatred, that world is gone. Let's hope Louis keeps up  the rants -- he's a sharp guy, for sure -- but uses the next one to talk about where we are in 2016 and how we got here.