"Activism is not terrorism": Rights groups call on Congress to investigate the FBI and DHS for surveillance of activists

On 45th anniversary of exposure of COINTELPRO, more than 60 orgs pen a letter to congressional judiciary committees 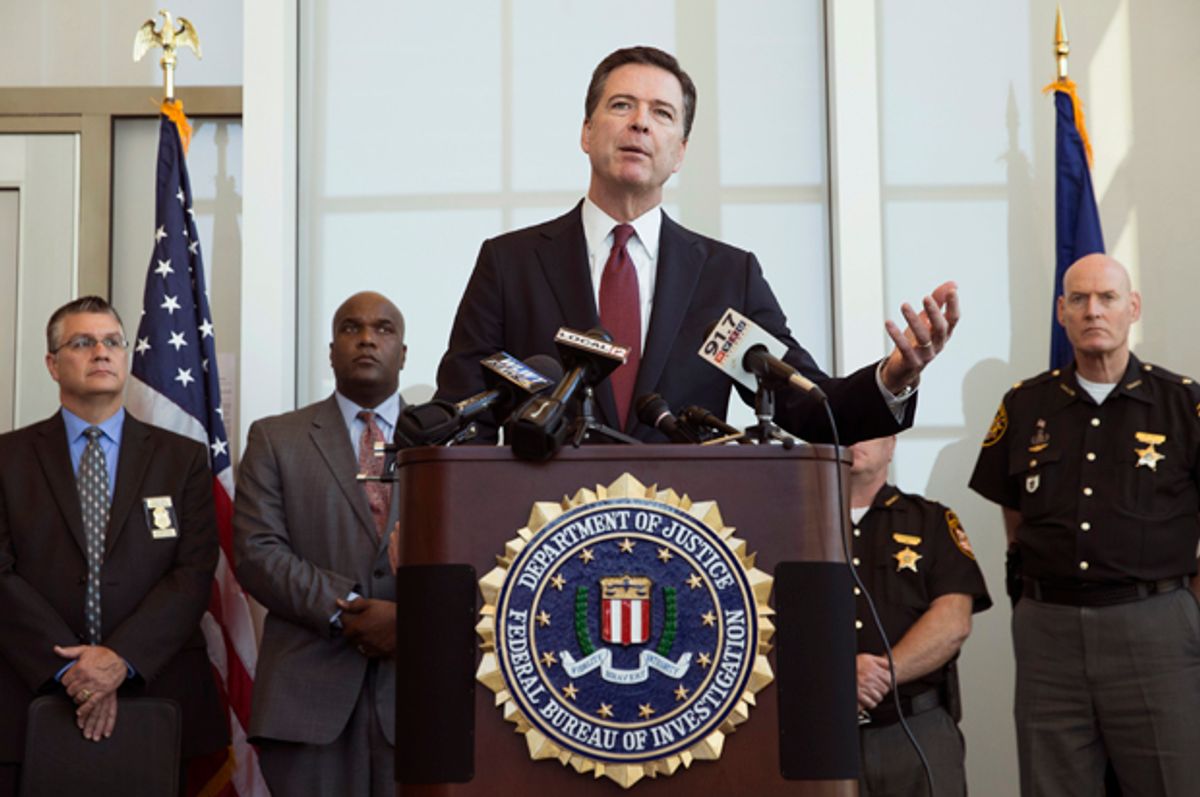 More than 60 legal, civil rights and activist groups sent a letter to the chairs of the Senate and House Judiciary Committee on Tuesday, asking them to launch an investigation into the FBI's and Department of Homeland Security's surveillance and repression of political protests and social movements.

The letter, which was initiated by the Bill of Rights Defense Committee and Defending Dissent Foundation, expresses "concern over Federal Bureau of Investigation  and Department of Homeland Security abuse of counterterrorism resources to monitor Americans' First Amendment protected activity."

It notes that the FBI "has a well-documented history of abuse of First Amendment rights," adding that in "recent years that abuse has continued."

School of the Americas Watch, Occupy Wall Street, Black Lives Matter and anti-Keystone XL Pipeline activism are all big targets of this surveillance and repression, the rights groups indicate.

Their letter thoroughly documents the evidence showing how the FBI and DHS have surveilled, infiltrated and repressed these movements, treating peaceful activists and terrorists. The FBI continues to send undercover agents and informants to infiltrate peaceful activist groups and use "counterterrorism" authorities and laws to surveil lawful political activity.

"That the FBI cannot discern between activism and terrorism shows us that they think dissent is still the enemy," said Chip Gibbons, a legal fellow at the Bill of Rights Defense Committee and Defending Dissent Foundation.

"There have been multiple attempts at reform but after each and every one we see the same thing happening again," Gibbons explained. "The FBI claims to no longer investigate groups for their political beliefs, but look at who the FBI investigates under its counterterrorism authority — peace groups, racial justice groups, economic justice groups — the very same types of organizations that were targeted during the heyday of J. Edgar Hoover," he said, referring to the former head of the FBI.

The groups released their letter on 45th anniversary of the break-in that exposed COINTELPRO, the secret program in which the FBI was spying on and infiltrating dissident groups, and even assassinating activist leaders like Chicago Black Panther Party Chairman Fred Hampton. COINTELPRO infamously blackmailed civil rights leader Martin Luther King, Jr., and tried to pressure to him to kill himself.

A variety of civil society and activist organizations signed the letter, including the Center for Constitutional Rights, the National Lawyers Guild, the Arab-American Anti-Discrimination Committee, ColorOfChange, the Council on American-Islamic Relations, Greenpeace USA, School of the Americas Watch and Veterans for Peace.

The groups point out that there is a historical precedent for this kind of investigation. In the late 1980s, it was revealed that the FBI had carried out a "counterterrorism" campaign against the peaceful activist group the Committee in Solidarity with the People of El Salvador, which opposed the U.S. arming and backing of the far-right repressive ARENA government during the Salvadoran civil war in order to defeat a popular socialist movement.

When the details of the FBI monitoring came to light, the Senate Select Committee on Intelligence further investigated, and released a report about the FBI surveillance in 1989.

Moreover, widespread outrage after COINTELPRO was revealed to the public pressured Congress to carry out its own investigation with the Church and Pike Committees. Popular pressure even forced Congress to pass reform legislation like the Foreign Intelligence Surveillance Act.

"Surveillance of First Amendment-protected activities has a chilling effect on free speech and civil society," the groups write in the letter. "Individuals who may otherwise express their views freely may refrain from participating in demonstrations or political organizations if they believe they will be monitored by law enforcement or intelligence agencies."

"It is also detrimental to free expression for law enforcement and intelligence agencies to conflate activism with terrorism. Labeling activism as terrorism criminalizes political dissent," they continue. "Given the current political climate and draconian laws concerning terrorism, individuals may be deterred from participating in completely lawful speech, such as a protest march, by this stigma."