David Letterman would finish off Donald Trump: Yes, we miss Jon Stewart, but no one deflated demagogues like Dave 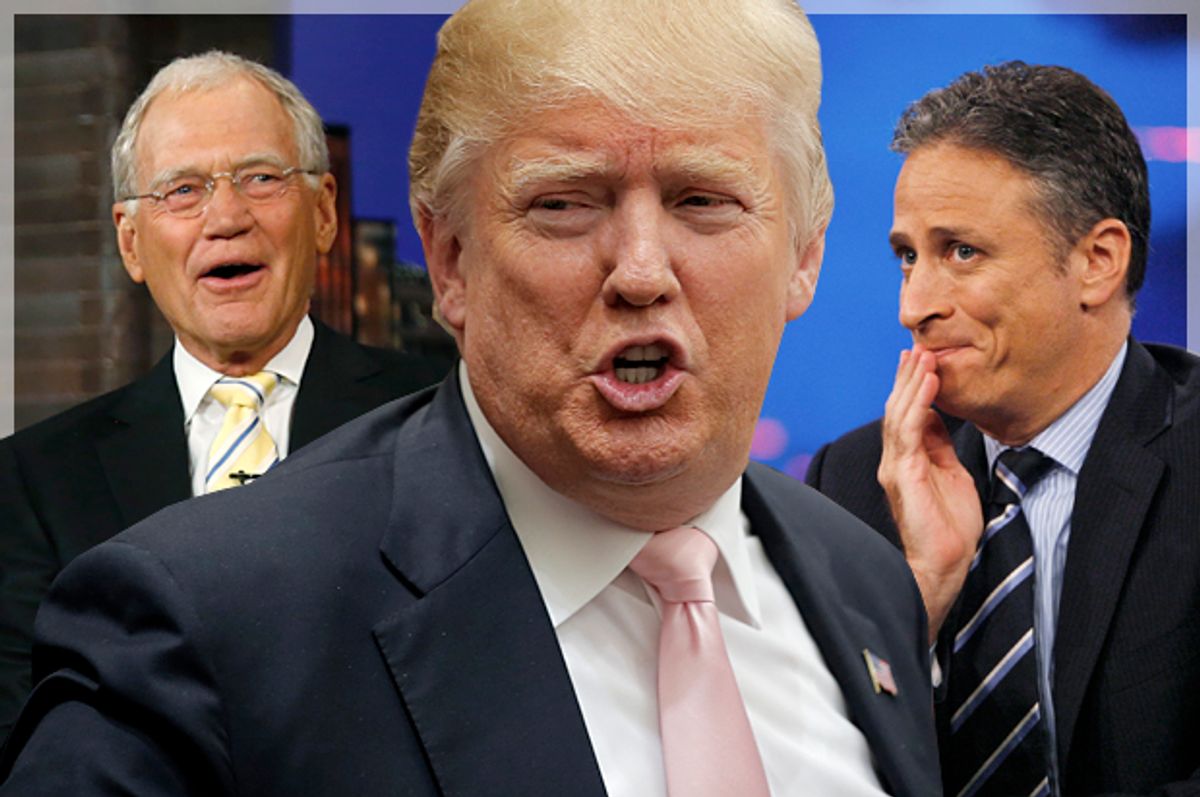 Each day Donald Trump is running for president is another day we miss Jon Stewart.  Within some quarters of the left, we imagine that if only Jon Stewart were at the helm of his show, Trump would be a thing of the past.

It’s a bit uncanny that the comedy landscape shifted at exactly the same time that our nation entered into one of the most ridiculous—and frightening—elections in recent history.   Stewart stepped down and was replaced by a grinning and ineffective Trevor Noah. Stephen Colbert put his brilliant pundit persona to rest to move more toward variety comedy on “The Late Show.”  But maybe all the attention on Stewart and Colbert misses the point. Maybe the comedic loss we should really mourn is that of David Letterman.

Besides having broad appeal across the political spectrum, Letterman was uniquely talented at making demagogues look like idiots.  In an interview with Katie Couric in 2009, Letterman went after one of the nation’s finest gasbags, Rush Limbaugh, “What about this bonehead Rush Limbaugh? Honest to God, I mean, what is going on there? He gets up in Washington and he’s the keynote speaker at some function and he comes up—he looks like an Eastern European gangster, you know? He’s got the black jacket on, the black silk shirt and it’s unbuttoned like, oh yeah, when you think Rush Limbaugh, you think, Ooh, let’s see a little flesh. Honestly, you know?”

Couric couldn’t stop laughing, but more importantly the nation was laughing too.

It’s also worth remembering that Letterman may well have helped tank the McCain-Palin ticket. Letterman went after John McCain for canceling his appearance on “The Late Show” in September 2008. McCain explained that he canceled his appearance and was suspending his campaign so he could go back to Washington and focus on the economy.  But moments into Letterman’s show, they got footage of him prepping to go live with Katie Couric. "He doesn't seem to be racing to the airport," Letterman deadpanned. He zeroed in on the idea that a war hero doesn’t abandon his campaign: "This is not the way a tested hero behaves.” He later mocked, "Somebody's putting something in his Metamucil." McCain was finished. He never recovered.

Letterman had a number of great moments when he went after the right.  He went after Bill O’Reilly regularly, refusing to let the blowhard get away with outrageous claims. In one especially satisfying example from 2006, he slammed O’Reilly as O'Reilly was denigrating anti-Iraq War protester Cindy Sheehan. O’Reilly’s claim was that she needed to be more careful with what she said since we were at war. Letterman replied: “Well, you should be very careful with what you say also.” He went on, “I have the feeling about 60 percent of what you say is crap.”

And then there was the brilliant time when he refused to let Bush spokesman Scott McClellan spout the party line when he appeared on the show in June of 2008: “My feeling about Cheney—and also Bush, but especially Cheney—is that he just couldn’t care less about Americans. And the same is true of George Bush. And all they really want to do is somehow kiss up to the oil people so they can get some great annuity when they’re out of office. [Pretends to be counting money] ‘There you go, Dick, nice job! There’s a couple of billion for your trouble.’ He pretty much put Halliburton in business and the outsourcing of military resources to private mercenary groups and so forth. Is there any humanity in either of these guys?”

The reason why these interventions were so powerful and so publicly persuasive was precisely because Letterman was not primarily a political comedian.  Besides being openly independent in his personal politics, Letterman’s late-night comedy was ordinarily smart, sharp and witty without a clear partisan edge.

But it wasn’t just Letterman’s comedy that mattered; it was his audience.  As much as many of us loved John Oliver’s recent Trump-fest—it does have over 16 million views on YouTube after all-- you can pretty much bet that not one Trump supporter will see it.  Or if they do, it won’t change their opinion. Oliver’s political comedy is openly partisan and so is his audience. While that sort of comedy does a great job of building a community of those who get the joke, it tends to alienate those who are its target.

Letterman didn’t have to contend with that sort of partisan blowback. The unique power of Letterman’s political interventions lies in the fact that he drew an audience from across the political spectrum. Letterman appealed to middle America. An Indiana native on a major network, he spoke to the heartland.   His viewers saw him as a down-to-earth, no BS kind of guy and that was why he had such a special talent for deflating gasbags and exposing demagogues.  We can be certain he would have had choice words for Trump.

Much was made of the fact that hiring Colbert as Letterman's replacement would help draw younger viewers back to the show, but what was missed was the reality that Colbert’s public identity as a liberal would influence the political demographics of his audience. His current audience is only 17 percent Republican, a shift to the left from Letterman’s more politically balanced viewer demographics.

The late-night comedian who has not only the platform but also the centrist demographics of Letterman is Jimmy Fallon. Studies show that about half of Letterman’s viewers switched over to Jimmy Fallon. Only 15 percent watch Colbert.  And yet, thus far, Fallon’s goofball comedy has done nothing interesting this political cycle. His comedy simply doesn’t have the dry edge Letterman’s did, but maybe it isn’t too late to hope.

The only way to mock Trump in a way that will have impact is for the comedy to come from within the hive.