How Bernie Sanders & Ted Cruz are both misrepresenting Detroit 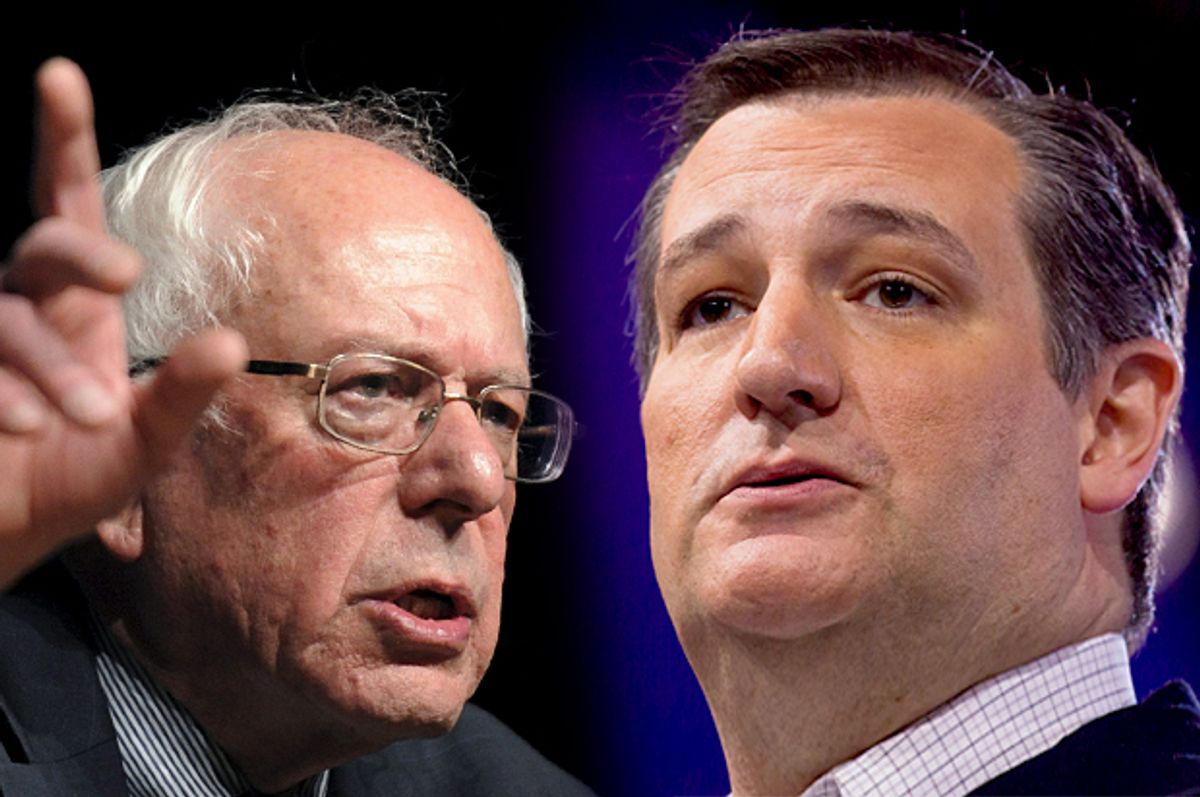 You have to feel for the people of Detroit. The rest of the country mostly only pays attention to the city for the wrong reasons – say, when the Lions are setting records for competitive futility or some photographer starts jonesing for his own “ruins porn” project. Oh, and during election cycles, when Michigan becomes one of the battleground states that could decide the next leader of the free world. All of a sudden candidates from both parties descend on Detroit to shake their heads over its decline and promise to do something about it just as soon as its people vote for them.

Given that, it would be nice if both Republicans and Democrats could at least be honest about the reasons why Detroit has gone from being the wealthiest American city per capita in 1960 to the impoverished wreck it is today. But in just the last week, we have seen a presidential candidate from each party try to shoehorn its struggles into his own political framework, facts be damned. As always when politicians try to slide some disingenuous garbage past the voters – which they do constantly – it makes one wonder if they are so ideologically blinkered that they cannot understand the nation’s problems well enough to craft some fixes.

On the Republican side, we have Ted Cruz. During the disaster that was last Thursday’s Republican debate, the odious Texas senator took an anodyne question from moderator Chris Wallace about bringing manufacturing jobs back to Detroit and other cities and turned it into a litany of the dumbest right-wing talking points about the decline of American cities in general:

“Detroit is a great city with a magnificent legacy that has been utterly decimated by 60 years of failed left-wing policies…[F]or 50 years, left-wing Democrats have pursued destructive tax policies, weak crime policies, and have driven the citizens out…That is a story that the media ought to be telling over and over again, the destruction of left-wing policies and the millions who have hurt because of it.”

In short, our impoverished and crumbling cities are all the Democrats’ fault. You encounter this argument all the time in the fever swamps of the right. The writers at National Review are particularly fond of spouting it, especially during times of strife.

The problem with this line is that it is too simplistic to explain the plight of Detroit. There is a whole history of policy decisions at the local, state, and federal levels that have brought it and other cities to this pass. Federal housing policy, for example, and the practice of redlining that stretches back at least as far as the late 1930s in Detroit and elsewhere, are two factors that have driven personal wealth out of the cities and into the suburbs, leaving the poor behind. As the wealth and capital have gone and some cities have sunk further into despair, federal aid has been cut, the money redirected to (mostly white) suburban areas. What’s left is greater demand for services in areas that now receive less money, both from local taxes and state and federal governments.

In other words, Detroit does not exist in a vacuum where it is untouched by state and federal policies, which have also contributed to its decline. There is a whole well-documented history of racial indifference and hostility at all levels of government that have brought the city to this pass.

Cruz seems to locate the beginnings of the decline in the mostly African-American riots of 1967. Those riots are often blamed for the white flight out of Detroit that, in truth, had begun long before then. But by using this as the starting point, Cruz subtly reinforced the modern Republican Party’s existing narrative that the racial unrest of the civil rights era and any echoes of it that are still with us today are all the fault of those damned liberal hippies.

The worst part of it is that he will not pay a price with the GOP electorate. If anything, this dog-whistling will help him catch up to Donald Trump, who has eschewed the dog-whistle in favor of the meltdown alarms of nuclear power plants.

On the Democratic side, Bernie Sanders has also been disingenuous with his own analysis of Detroit’s long slide. In his case, he has tried to tie the city’s misfortunes to the free trade policies generally supported by Hillary Clinton. But doing so also requires some fudging of timelines and exaggerations of the causes.

(BERNIE FANS: I AM IN NO WAY SAYING HE’S A RACIST LIKE TED CRUZ, PLEASE DON’T “ACTUALLY” ME.)

Last Thursday Sanders’s campaign sent out this tweet that has earned the rebuke of fact checkers. He tried making the same case in Sunday night’s debate:

“We passed NAFTA and other disastrous trade agreements which had a horrendous impact on African-Americans in particular, in Flint, in Detroit and all across this country. So when we talk about the '90s, you're right. A lot of good things happened, but a lot of bad things happened.”

This is at least less disingenuous than Cruz’s arguments. NAFTA is generally understood to have been terrible for American workers, with the AFL-CIO blaming it for causing 700,000 jobs to leave the country for Mexico between 1993 and 2011. Since the agreement was signed by Hillary Clinton’s husband during his presidency, it makes sense as a political attack to try to tie her to it. (The subject of how much blame she deserves for agreements signed by her husband is a whole other column.)

The problem, as with Cruz’s claims, lies partly in the timing. NAFTA went into effect in 1994. Detroit’s manufacturing decline had been in effect for decades before that. It wasn’t that plants in Detroit had packed up and moved to Mexico or Canada. Some of them had simply moved outside the city limits to the suburbs, thanks in part to federal policies that promoted such moves (and housing policies that prohibited African-Americans from living near those factories, thus increasing unemployment in the city).

Sanders is partly using Detroit as a stand-in for the decline of the American auto industry overall, citing jobs that automakers have lost in not just Michigan but Ohio and Illinois as well. The problem with this argument, again, is that American auto manufacturing in those states was on the decline for decades before NAFTA. The free trade agreement might have accelerated the declines in some way, but the structural forces – the decline of unions and American car makers moving plants to right-to-work states in the South, the rise of foreign manufacturers, particularly the Japanese – had been at work since long before most of the country outside of Arkansas had even heard of the Clintons. It’s fair to argue that Hillary Clinton supports free-trade agreements that hurt American workers. But tying her specifically to the decline of Detroit (which is in itself a stand-in for an entire industry that is located outside the city) is a big enough stretch that Plastic Man might find it uncomfortable.

What gets forgotten in all the cheap point-scoring required to win votes, of course, are the people of Detroit, who are being told to vote for people who won’t be able to come up with honest solutions to their problems (should any exist) if they can’t honestly identify the causes of the problems in the first place. That should make us mad no matter which end of the political spectrum we belong to.