"Parading kids onstage ... to be the butt of a racist joke"? This is Chris Rock's idea of progress?

Saying that Asians are nothing but quiet calculators is not edgy. It's the kind of joke Rock never wanted to tell 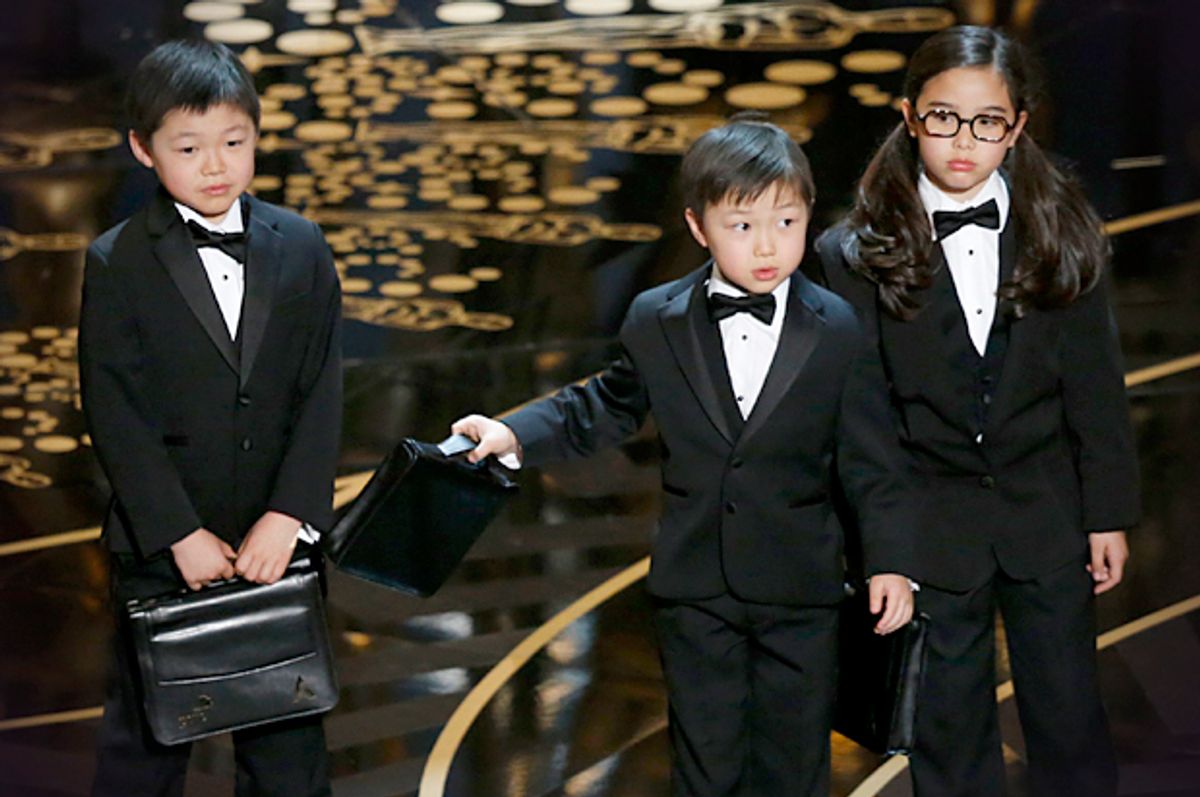 It wasn't until Laura Kung attended the Oscars rehearsal that she realized what her family had signed up for. Her daughter, Estie, a badass in her own right, had been selected as one of three children who would share the stage with host Chris Rock. Laura had been told that they would be introduced as accountants from PricewaterhouseCoopers, the firm that tabulates the Oscars results. She assumed the bit would be complex, perhaps an artful takedown of the crude stereotype that Asians excel at math. Instead, she would soon realize, Rock's elementary joke merely restated it. “[Pricewaterhouse] sent us their most dedicated, accurate and hard-working representatives. I want you to please welcome Ming Zhu, Bao Ling and David Moskowitz,” Rock said, providing his audience with the uncomfortable choice of applauding and welcoming three children or silently protesting racism.

According to Public Radio International, “After Estie got her tux fitted and was already looking forward to the opportunity...her parents heard the entirety of the joke for the first time. But they had already signed the contract and had to confront the very likely possibility that their daughter would be part of a racist joke that would cause an uproar. After talking to Estie, they ultimately decided to take the optimistic point of view, believing that an inappropriate Asian joke that might provoke a difficult public conversation may be preferable if the status-quo alternative was to have no Asian presence at all.”

This specific instance is emblematic of the minority experience in Hollywood, one that has parallels with the #OscarsSoWhite conversation that dominated much of Rock's humor throughout the evening. Giants such as Will and Jada Pinkett Smith and Spike Lee chose not to attend the event, prompting many to unfairly place the onus of solving Hollywood's diversity problem upon other minorities, who stood to gain the most from a high-profile appearance at a highly rated awards show. But the conversation also raised important questions about who gets to have agency in the industry. Rock said it best himself during his opening monologue. “It’s not about boycotting anything. It’s just, we want opportunity. We want black actors to get the same opportunities as white actors ... Not just once. Leo gets a great part every year ... all you guys get great parts all the time.”

A highlight of the evening came when Rock interviewed black moviegoers, asking what they thought of films like "Trumbo" and "Bridge of Spies." “Where are you getting these movies from?” one asked.

“These are real movies!” Rock insisted.

“No, it's not. I watch movies. I come to the movies all the time,” she fired back.

When he asked whether they saw "Straight Outta Compton," however, responses were far more enthusiastic. “I did see that,” “I loved it!” and “Oh hell yeah,” were representative answers. The bit successfully, and hilariously, conveyed that the films being honored that evening represented only a small sliver of what is considered great, moving art, as determined by a small sliver of the population. In a recent New York Times feature titled “What It’s Really Like to Work in Hollywood (*If you’re not a straight white man)” writer and director Rick Famuyiwa suggested this problem extended beyond the academy. “It’s always a weird conversation when you’re trying to explain how a film about kids from Inglewood can be mainstream,” he said, “but you don’t have the same conversation about a very specific set of kids in suburban Chicago or South Boston.”

Asian writers and directors face similar challenges. In the same feature, director Justin Lin described the challenges he faced in attempting to secure funding for his first film, "Better Luck Tomorrow." “[R]ight away everybody’s like, 'It’s an Asian-American cast. It’ll never sell.' And a lot of them were Asian-American investors. A guy offered $1 million ... he said, 'We’ll get Macaulay Culkin to be the lead.'”

So it came as quite a blow when Rock himself, given the chance to provide young actors of color with “great parts,” chose to, as actress Constance Wu put it, “parade little kids on stage w/no speaking lines merely to be the butt of a racist joke.” Much like Rock's decision not to participate in the boycott, the Kungs' decision to participate in the bit made moral and practical sense, which makes it all the more heartbreaking. The only way for Estie to seize opportunity was to be used as a mascot by a man who, minutes earlier, condemned Hollywood for its failure to provide only white actors with an array of them.

For his part, Rock anticipated a backlash, which made the joke even more offensive for its deliberate cruelty. “If anybody's upset about that joke, just tweet about it on your phone that was also made by these kids,” he said. The implication was that anyone who enjoys products from a company that employs child labor has no right to condemn racist humor. The logic is absurd, similar to suggesting that accepting the hosting gig strips Rock of his right to criticize the academy. Of course, many of us benefit from systems that implicitly devalue and anonymize people of color. How could that possibly redeem Rock for explicitly doing so?

Yet suggesting that such matters are unimportant was a recurring theme of the evening. In his opening, Rock claimed that black people hadn't protested the academy in the past because they were instead focusing on “real things.” “We were too busy being raped and lynched to care about who won best cinematographer,” he said. “When your grandmother’s swinging from a tree, it’s really hard to care about best documentary foreign short.” It didn't not make me uncomfortable to see white stars such as Jennifer Lawrence guffawing at the triviality of protesting for greater diversity in the arts.

Rock has dedicated his life to comedy, not feeding the poor or curing the sick or addressing what he might call “real” problems, but his work is still meaningful, important and can do “real” good. Because the two realms are not entirely separable. Pretending greater representation is only important insofar as it provides actors of color with greater opportunity is like saying the election of our first black president only has value for aspiring politicians. Diversity on-screen doesn't just matter to actors, it matters to audiences. Increased visibility helps challenge norms that put poor children in factories rather than schools. Explicitly degrading people props up systems that implicitly degrade them. It makes them more palatable.

To be clear, I did not expect, and would have been disappointed by, a sanitized evening void of provocative humor, the kind Rock is widely regarded for. But Rock himself has acknowledged that offensive humor isn't necessarily provocative, and can instead be trite, unfunny and useless as both entertainment and social commentary. “There were just too many cliché jokes,” he once said in an interview with New York. “I never wanted to do that horrible gay voice that everybody does ... I didn’t want to do impressions of each ethnic group.”

Rock was not mocking a stereotype, but casually reinforcing one as though it were an act of defiance. To say that Asians are nothing but quiet calculators is not edgy. It's the dominant cultural narrative, one that has a tremendous impact upon the lived experiences of young Asian-Americans. It is precisely the kind of joke Rock claims he never wanted to tell.

In his opening monologue, Rock described the experience of meeting Barack Obama at a fundraiser. Right before a picture was snapped, he said, “Mr. President, you see all these writers and producers and actors? They don’t hire black people, and they’re the nicest white people on earth! They’re liberals! Cheese!” Laura Kung, describing her naiveté when she brought Estie to that audition, had similar feelings. “I assumed there was a bigger picture, a more complex joke given all the emphasis placed on diversity at the Oscars this year.” Yet during this year, this was the best a brilliant comedian could do by three children, and by the millions more watching at home. Say Cheese, Estie!