Al Franken did not cause Donald Trump: Yet another lousy explanation for why the GOP is self-destructing 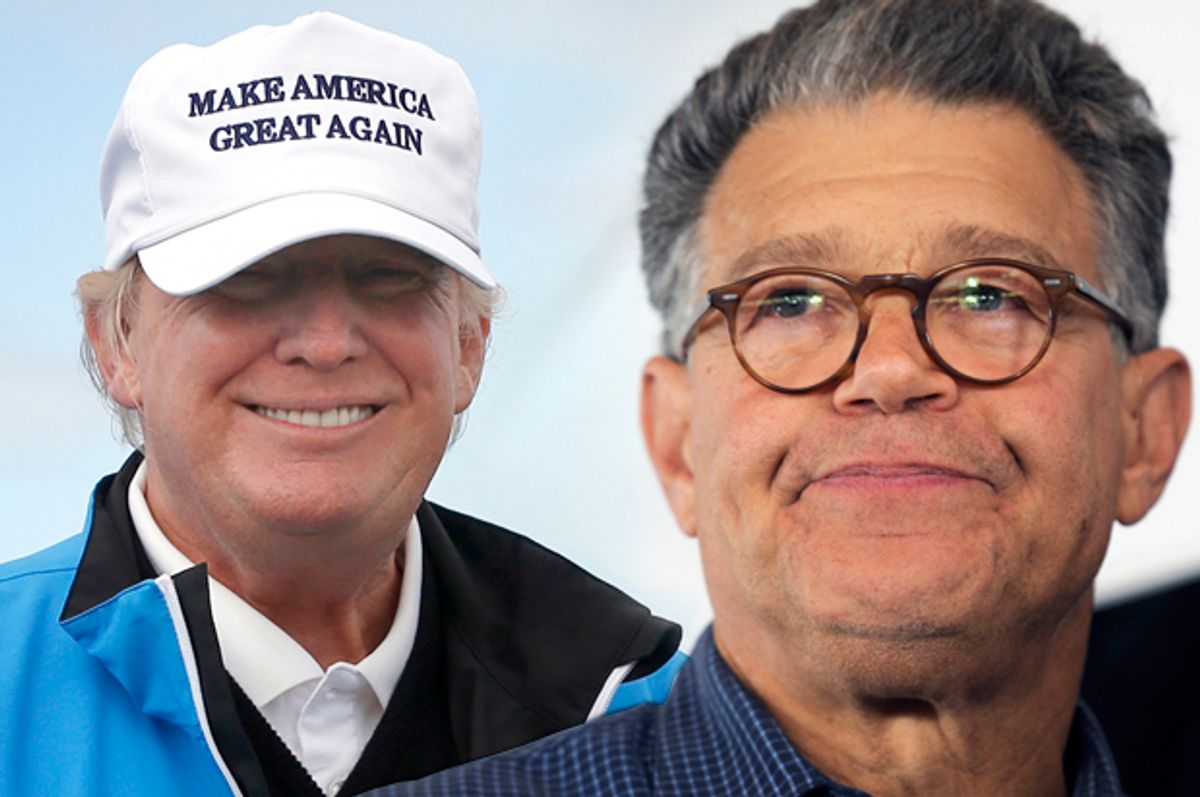 The Republican Party is falling apart, its many internal fissures being ripped wide by Donald Trump’s blend of gross nativism and authoritarian posturing. A number of conservatives and center-right columnists are busily trying to figure out why this is happening to their beloved party, and so far they’ve come up with one highly satisfying explanation: It’s all Barack Obama’s fault. The latest addition to this hot-take menagerie comes courtesy of National Journal’s Josh Kraushaar, who spies the stirrings of the Trump phenomenon in a tightly contested Senate race from eight years ago.

“Looking for a culprit to blame for all the polarization, gridlock, and bad feelings in Washington?” he writes. “Point to Sen. Al Franken. No, that’s not a joke.” Actually, it is a joke. A really bad and determinedly stupid joke that Kraushaar punishes the reader with until they realize 800 words later that the punch line is they’ve wasted fleeting and irrecoverable moments of their lives reading it.

The conceit behind Kraushaar’s column is that Franken’s narrow 2008 Senate victory in Minnesota provided Barack Obama with a 60-vote supermajority, which enabled him to pass the Affordable Care Act without Republican support, which then became the rallying cry for the Tea Party wave, which crashed into Washington and turned everyone crazy, and after a few more (unexplained) steps: presto magic, Donald Trump. If Franken hadn’t won, writes Kraushaar, then Obama would have been forced to win the vote of at least one Republican senator to pass healthcare reform, which would have made things better somehow:

Without a Democratic supermajority, Obama would have been forced to negotiate with Republicans (or, at least, former Sen. Olympia Snowe of Maine) and settle for the incremental health care legislation that his then-Chief of Staff Rahm Emanuel recommended. The GOP would still have been opposed to any Democratic health care reforms, but the antipathy would have been muted because a few Republicans would have supported the legislation. Instead of provoking a pitched partisan showdown that culminated with then-House Minority Leader John Boehner exclaiming that the Congress had “shatter[ed] the bonds of trust” with the American people, Obama could have tempered the wrath of the Republican opposition.

This is ahistorical wishful thinking presented as self-evident truth. Last year, Norm Ornstein wrote a useful corrective to the commonly accepted “reality” that the Affordable Care Act was “rammed through Congress” without compromise or input from Republicans. Democrats and the White House made repeated and insistent overtures to Republicans in the Senate looking for a way to bring the GOP into the healthcare negotiations. They made some headway – with Olympia Snowe especially – before the Senate Republican leadership cracked down and precluded the notion of Republican involvement in the healthcare legislation.

But let’s stipulate that one or two moderate Republican senators had broken ranks and sided with the Democrats – is it really reasonable to assume that the Tea Party fury would have “tempered”? It seems just as likely that the fury would have been augmented by a sense of betrayal, and those heretical Republicans would have been targeted by conservatives and faced enthusiastic primary challenges from the right. The idea seems to be that a sufficiently moderate piece of healthcare legislation would have left Republican voters upset but not angry, which overlooks the fact that the ACA is itself an act of policy moderation that was met with a buzzsaw of incoherent rage.

But this is all speculative. It’s better to focus on what we know actually happened, and Kraushaar doesn’t seem to have the firmest recollection of what the political environment was like in the early Obama years. “The notion that Obama was fated to face an intransigent Republican opposition has always been off-base,” he writes. “Democrats had all the political tools they needed to press Obama’s widespread personal popularity into an agenda that could pick off enough moderate Republicans to succeed.”

This is nuts. The Republican strategy for the early Obama years was to maintain unyielding opposition to everything Obama wanted from literally day one of his presidency. Michael Grunwald wrote about how Republicans recognized that they could force Obama to break all his campaign-trail promises of bipartisan compromise if they simply refused to go along with anything. That’s why as the economy was collapsing and the White House put together the stimulus package as its first big legislative push, former House GOP whip Eric Cantor imposed hard and fast rule of zero Republican “yes” votes. They ruled out compromise from the beginning and they weren’t shy about saying as much in public. “It was absolutely critical that everybody be together because if the proponents of the bill were able to say it was bipartisan, it tended to convey to the public that this is O.K., they must have figured it out,” McConnell said of healthcare reform in 2010. But Kraushaar subscribes to the irritatingly common viewpoint among pundits that the lack of bipartisan compromise during the Obama administration is a function of the White House’s failure to reach out enough to the GOP, and not the GOP’s deliberate strategy of wringing partisan gain from blanket obstruction.

Also, Kraushaar’s focus on the passage of the Affordable Care Act obscures every act of political self-destruction that ultimately led to the GOP going to war with itself. The ACA was a catalyst for Tea Party action, but at every stage since 2010 the Republicans have catered to the most extreme anti-Obama elements within the party. Obama didn’t force the Republicans in Congress to shut down the government over Obamacare. He didn’t force them to abandon comprehensive immigration reform. He didn’t force the House Republicans to vote to deport undocumented immigrant children. He didn’t force them to threaten to withhold Homeland Security funding. Those things happened because extremists within the GOP seized control of the party’s agenda and its leadership was unwilling to say “no.” Trumpism is as much a reaction to Obama as it is to a Republican Party that continually failed its constituents by abdicating its basic governing responsibilities.

That makes the 2008 Franken election seem like an arbitrary and altogether strange choice as the root cause of Trumpism. Why not the entire presidency of George W. Bush, which was basically one long string of institutional failures culminating in a massive economic collapse? Or why not the underwhelming exercise in donor-class Republicanism that was Mitt Romney’s presidential campaign? The GOP is self-immolating on its way to electing a corrupt Mussolini wannabe as its presidential nominee, and if your explanation for why that is happening boils down to “Obama governed like a Democrat,” then you’re deliberately missing the point.