"Ethnic cleansing" is shockingly popular in Israel: Almost half of Israeli Jews want to kick out Arabs — Pew study 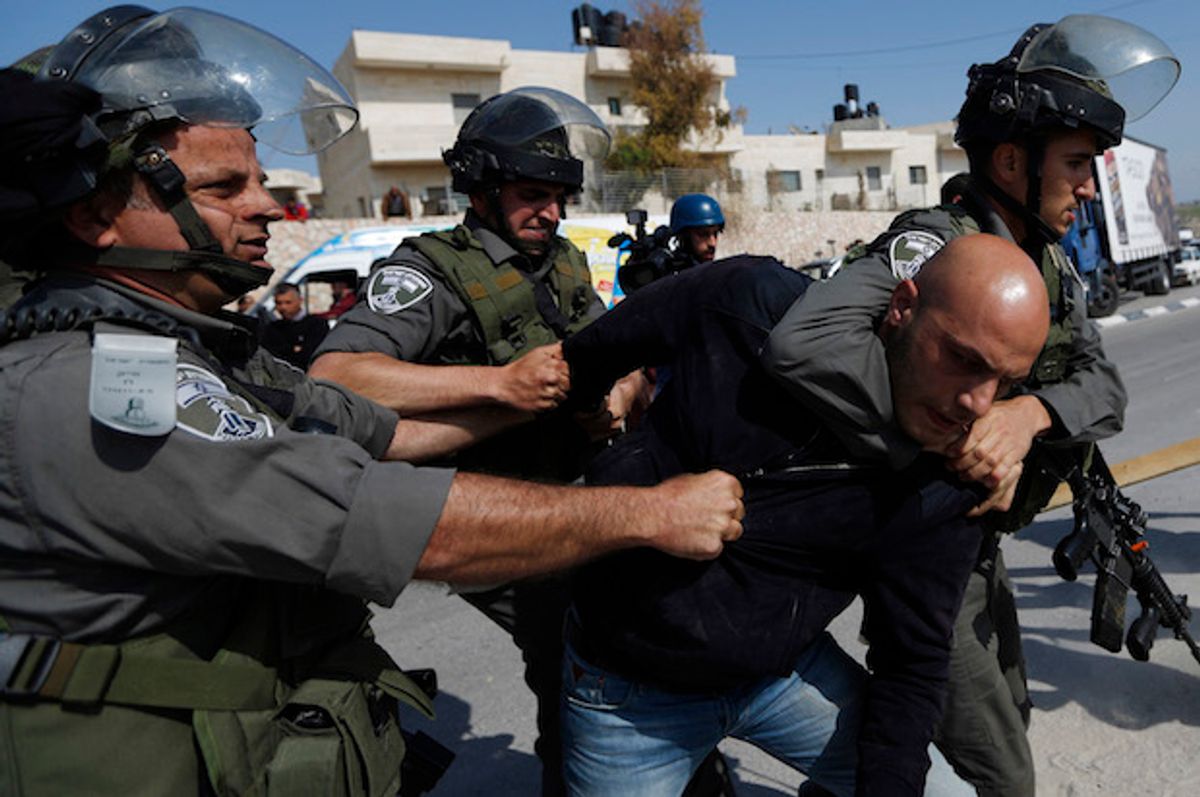 Israeli police detain a Palestinian protester near the West Bank town of Abu Dis, near Jerusalem, in March 2015 (Reuters/Mohamad Torokman)
--

Almost half of Jewish citizens of Israel want to kick Arab citizens out, according to a new study by leading polling agency the Pew Research Center.

When asked whether "Arabs should be expelled or transferred from Israel," 48 percent of Jewish Israelis said they strongly agreed or agreed. On average, the more religious the person was, the more they supporting expelling Arabs.

British newspaper The Independent interpreted this to mean that there is widespread support for ethnic cleansing in Israel, according to the definition in the Encyclopaedia Britannica. The Pew study does not indicate what means would hypothetically be used to expel or transfer Arab Israelis, but the International Court of Justice defines ethnic cleansing as "rendering an area ethnically homogeneous by using force or intimidation to remove persons of given groups from the area."

The responses to the question differed very clearly on ideological lines. The more conservative someone was, the more likely they were to believe that Arabs should be removed from Israel; the more progressive, the less likely.

These results may appear shocking today, but Indigenous Arabs were in fact already ethnically cleansed in the 1947 to 1948 war that established the state of Israel. Palestinians call this violent expulsion the Nakba (the "catastrophe" in Arabic).

As Salon has previously reported, the Zionist militias that founded Israel ethnically cleansed large portions of historic Palestine, sacking hundreds of Palestinian villages and expelling roughly two-thirds of the Palestinian population at the time, more than 750,000 people.

Plan D "spelled it out clearly and unambiguously: the Palestinians had to go," Pappé noted. "The aim of the plan was in fact the destruction of both the rural and urban areas of Palestine," the historian wrote, adding the Israel's plan "contain[ed] a repertoire of cleansing methods that one by one fit the means the U.N. describes in its definition of ethnic cleansing."

Still today, Israeli Arabs already endure enormous and structural discrimination. The Israeli human rights organization Adalah has documented more than 50 laws "that directly or indirectly discriminate against Palestinian citizens of Israel in all areas of life."

Although the widespread support for expelling Israeli Arabs is perhaps the most shocking finding, the extensive new Pew study reveals more about the polarization and extremism in Israeli politics.

Pew found that 79 percent of Jewish Israelis think the government should give Jews preferential treatment.

Three-fourths (76 percent) of Israeli Jews said it is possible for Israel to simultaneously be both a democracy and a Jewish state. Roughly two-thirds (64 percent) of Israeli Arabs, on the other hand, said Israel cannot be both democratic and based on a religion or ethnicity.

The study found that 79 percent of Israeli Arabs say there is a lot of discrimination in Israeli society against Muslims. Roughly three-fourths (74 percent) of Israeli Jews, on the other hand, insisted Muslims do not face much discrimination.

Israeli society is incredibly religiously segregated, the poll also revealed. It found that  98 percent of Jews, 86 percent of Christians, 85 percent of Muslims and 83 percent of Druze say all or most of their close friends share the same religion.

The study indicates that hard-line, extreme positions are becoming increasingly common in Israeli politics. Israel has illegally occupied the Palestinian West Bank since 1967, and Pew found that the illegal settlements Israel has gradually expanded in the decades since are becoming more and more popular among Israeli Jews. The study also revealed how belief in the possibility of a two-state solution is decreasing overall among Israeli Arabs.

Pew's latest research appears to bolster what many prominent Israel-Palestine analysts have long argued: the possibility of a two-state solution, with an independent Palestinian state, has died. Even humdrum moderate Thomas Friedman has admitted that a one-state solution is inevitable. The question that remains is which kind: a religious, sectarian, apartheid state; or a secular, democratic, binational one?