Help us, Jon Stewart: You're our only hope to defeat Donald Trump

It's time to saddle up, and come back for one last cycle. If we ever needed sanity restored, it's now 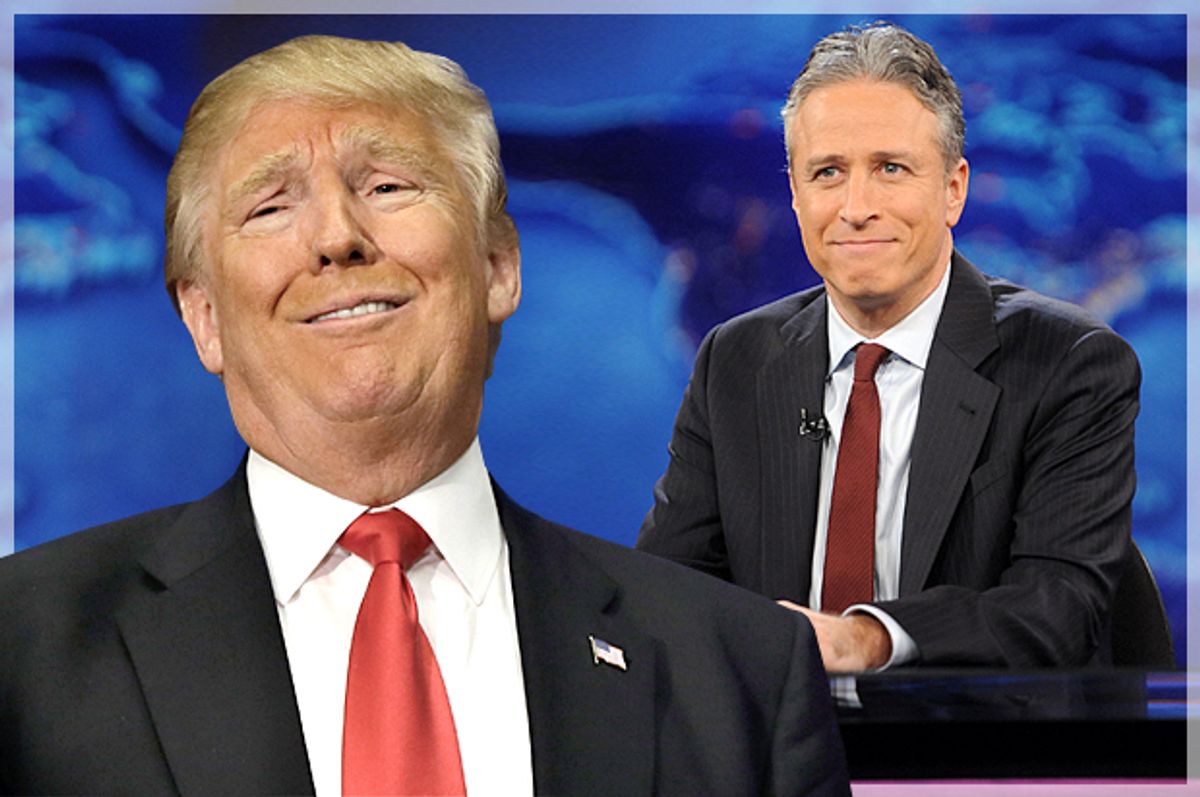 If Donald Trump becomes the Republican nominee, but Jon Stewart isn’t around to crack wise, then is it still insane? While pondering that Zen koan, consider this as well: The world was squeaking along with its garden variety absurdity, but it wasn’t until Stewart’s retirement on the eve of the first Republican debate that it went full Charlie Sheen.

After 17 years opining on the lunacy of the body politic and the inanities of the media, his sudden absence may have created a vacuum at just the wrong moment. Faced with a Trump candidacy based as much on canny media manipulation and entertainment as politics, humor may be best way we have to process the meshuga. We need someone to point out the ironies of Trump having “one of the all time great memories” yet not being able to recall anything about the reporter with a disability who followed him for years, or the name David Duke not ringing any bells. Someone to drive home that Trump’s tell-it-like-it-is is telling it like it isn’t. Trump wins because he's more entertaining than everyone else, so the takedown needs to be entertaining as well.

The objection will be that Stewart speaks to a bubble of like-minded liberals, and that the older working-class voters who like Trump will be less responsive to incisive progressive witticisms. But this type of thinking is steeped in the conventional categories that ordained Trump’s rise impossible from the outset. Much of Trump’s base self-identifies as moderate or liberal and is hooked into popular media; his support cuts across the traditional ideological and demographic lines. It’s true that he disproportionately relies on lower information voters, causing him to gush “I love the poorly educated!” But in fact, the different bubbles have points of contact, and skillfully wielded satire based on true observation might be the most impactful way of injecting nuanced ideas into the public consciousness. Stewart’s ratings were never blockbuster, but his influence was outsized. The news networks watched and reacted to Stewart’s "Daily Show" with a gleeful masochism, so cleverly did he skewer them and the culture at large. From staging an intervention for GOP primary voters after Gingrich’s surprise surge in 2012 to excoriating the Bush administration for its policies on torture, the show’s arguments and language affected how the issues of the day were framed.

Another objection from the New York Times’ chief television critic James Poniewozik says Trump thwarts comedy because the gag is too obvious. The joke is the thing itself, leaving nothing further for the comedian to say. It’s hard to satirize a clown. And this is a fair commentary on the current roster of late-nighters, composed heavily (save "Daily Show" and Comedy Central veterans Stephen Colbert, Larry Wilmore and now Samantha Bee) of neophytes and lightweights. But Stewart had a singular versatility. Remember his mischievously oblique response to Rick Perry’s "oops" moment? Throughout the segment he set out to give us three-item lists (his three favorite Adam Sandler movies, the three times it would be acceptable for Herman Cain to call someone a princess, etc.) only to stall out at the third. All the funnier for not being head on; for mashing different streams of humor into a hybridized superjoke.

While Nate Silver at FiveThirtyEight tries to downplay the historical significance of what’s happening now by joking that “‘with the exception of 2016‘ will be a common phrase in dissertations in 2044,” his track record so far this cycle has not been spectacular. As political scientists debate which terms best apply to Trump, authoritarian, populist, fascist or proto-fascist, there is at least some chance that when a latter-day Gibbon is writing his account of the decline and fall of the American Republic, this election will feature prominently. Chapter one of "The Rise of American Fascism" may be an account of the early life of one Donald J. Trump. In the words of the big man himself, “We’ve got a big problem here folks.”

One thing Stewart and Trump have in common: few come out of a confrontation with them undiminished. If you think Trump’s emasculation of Bush was hard to watch, go back and review the Stewart obliteration of Trump’s former "Apprentice" costar and fellow rich guy Jim Cramer. Against a charlatan whose arsenal of insults doesn’t extend much beyond “dopey,” “loser” and “what a joke,” this should be like shooting fish in a barrel. And yet it would be the interview Trump couldn’t stay away from, political comedy vs. comedic politics, a modern Ali vs. Foreman.

In Stewart’s final days, his show ran a segment sarcastically showcasing all the articles declaring Stewart had “eviscerated” or “demolished” someone or -thing -- the NRA, the Bush family, the media, Wall Street, ISIS, racism and on and on. Those things all remained, so Stewart was left to conclude he had accomplished nothing with his potshots from the peanut gallery. Like George Bailey from "It’s a Wonderful Life" we saw a partially serious moment of despair. “The world is demonstrably worse than when I started. Have I caused this?” But now he’s been gone less than one year, and the nation looks poised to hand over the keys of the kingdom to Mr. Potter. Maybe it’s a complete coincidence, or maybe the comedian par excellence exerted a subtle gravity on the political unfoldings after all; maybe “America’s most trusted news anchor” acted as an intangible check to the intellectual entropy we’re now experiencing.

Since the moment Stewart announced his retirement I’d resigned myself to a future of telling youngsters how comedy isn’t like it was back in my day, a future when the belly laughs are less common and less infused with satirical truth. But unlike some in the political establishment, I can’t yet resign myself to a White House flashing a neon Trump sign over its neoclassical columns; to a reality show star waking up in the same bed as Theodore Roosevelt and Abraham Lincoln; to Hail to the Chief playing while out struts a Mussolini-quoting tough guy with the complexion of a faded yam, a guy who’s never wrong, even when he is. We should not be ready to go gentle into that bad night.

And so while we as a country mull over whether the Donald has a sufficiently judicious temperament to entrust with the nuclear codes, I declare in this open letter to Mr. Stewart: It’s time to shave the Al Gore beard, dust off the ol’ funny man suit, and practice that inimitable wild-eyed expression of shock and dismay in the mirror. Time to queue the Rocky training montage. Time to saddle up, and come back for one last cycle. If we ever needed sanity restored, it's now.

Do you deserve time with your family after nearly two decades of immersion in the craziness of American media and politics? Do you ever. So this isn’t fair, but dude, your country needs you. That might be absurd, but it’s no joke.

Help us, Jon Stewart. You’re our only hope.