"I was melting from the inside": My struggle with postpartum anxiety

"Since my daughter’s birth, I carry emotional instability like a spore in my head, latent, but ready to sprout" 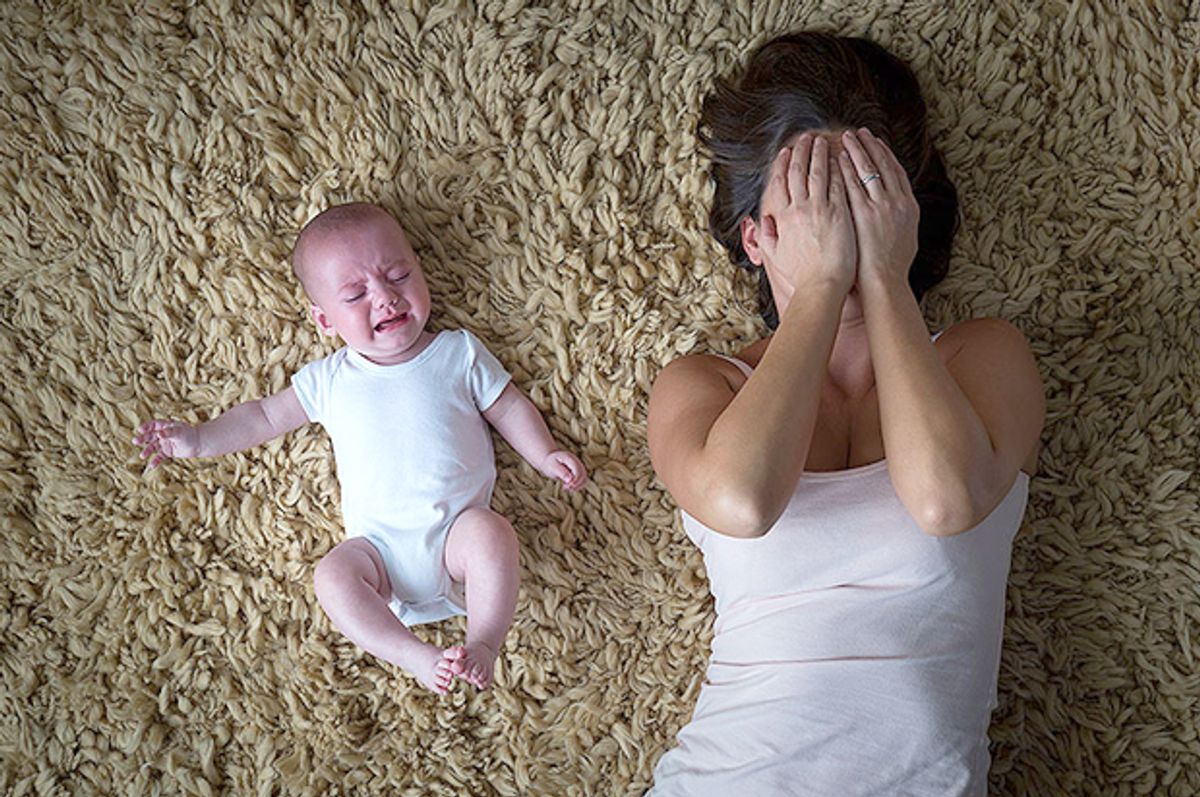 When my daughter, Clara, was 4 months old, I became mentally ill. The psychiatrist I’d called—following two fully sleepless nights, escalating panic attacks, lack of appetite, and the fear that I would never recover from the birth of my child—said I was experiencing a “moderate to severe episode of postpartum anxiety.” It didn’t matter that I had work (teaching and writing) I loved, or Danny, my kind and brilliant husband, or my perfect baby girl. Even with all of these gifts, I’d gone officially crazy.

It started with me feeling tired, but more than the usual new mommy standard. Commuting on the subway rendered me nauseous and dizzy. The effort of bumping Clara down the stoop for a stroll in the winter sunshine was insurmountable. I planned our Mommy Group’s first-ever-night-out-without-babies, but then worried too much to show up. My arms vibrated when I held Clara. As I walked to get coffee and a scone, passing faces grimaced and swelled with malevolence. Car alarms, sirens and unexpected footfalls made me jump. I felt as if I was melting from the inside.

That was the beginning, of what a tidier writer or mother might call my “journey to recovery,” a story that would progress in neat, even beats. Before I gave birth, I didn't think postpartum mental illness could happen to me; I got sick, received treatment and medication; post-recovery, I became an advocate for other women, turning this worst-thing-that-ever-happened-to-me into the topic for my first book. That story isn’t wrong, exactly. As my grandmother would have said, I took lemons and made lemonade. Cue the surging string section out of "The Blind Side" or "Erin Brockovich."

But I’m not a tidy writer or mother (as the collection of socks under my sofa attests), so cue a different soundtrack, with tensile strings and more percussive looping. Or maybe I should just say it, into the needle-bump drag at the end of the soundtrack: I’m not recovered, and never will be.

Then what am I?

I’m a woman with a mental illness. I’m a mother whose brain doesn’t always behave itself. Since my daughter’s birth, I carry emotional instability like a spore in my head, latent, but ready to sprout. That potential has affected my parenting style ever since. Which is not necessarily a bad thing.

As teacher, I’ve worked with kids with learning differences for years. The result of successful remediation is rarely recovery. But once the frustration of knowing they won’t be “cured” wears off, something else happens: They learn to budget more time for schoolwork than their friends or to plot ahead how they’ll talk to their teachers when—not if—they need help. These kids often come to understand their needs better than typical learners.

I’ve come to realize that mothers (including myself) who struggle with postpartum mental illness have to prepare, to remediate parental problems. But we can transform our weaknesses into… I hesitate to use the word “strengths.” More like: if we have to rewrite the manual, we might as well make it a better book. So, five years after my diagnosis (practically to the day) here is my messy, arrhythmic story of parenting with anxiety.

After I got my meds —Zoloft for the anxiety that my exhausted body turned into depression, Ativan to cut the panic, and Ambien to put me to sleep—I was devastated to hear that I might need to wean my daughter. Breast-feeding was one of the few “mommy things” I was pretty sure I was doing right.  I read up on the literature, consulted extra doctors, and ultimately felt safe continuing to nurse, carefully, on my pharmaceutical regimen.

Now, most of my breast-feeding friends weaned between 6 and 12 months. Somewhere in that timeframe, their babies learned how much fun it was to try out their new teeth on something with more texture and taste than Mama’s boob. Clara never got less interested in “the nursing relationship.” We kept going . . . for two and a half years.

The usual explanation for extended breast-feeding is that it’s better for the child. I’ll admit the truth, though. I kept breast-feeding for me. That connection reassured me that I wasn’t an unfit mother, all panic and no nurture.

After my insomnia hit, my doctor and therapist insisted that my health required eight uninterrupted hours of sleep, in a room away from Baby. We live in a small Brooklyn rental, and Clara's crib was in an alcove next to my head. Danny heard the doctors, and insisted we figure it out. We put Clara’s bassinet in his office on the far side of our apartment, two heavy wooden doors away from medicated me in the marital bed. Danny slept on the couch, taking Clara’s nighttime feeds. He continued to do this even after she was big enough to sleep through the night, knowing that I still needed the rest. Six months later, we built Clara her own room, and Danny came back to bed.

Women with postpartum mental health issues obsess over their maternal failings, and I was a classic case – I couldn’t wake in the night with my baby, which (in my mind) meant that I wasn’t the parent whose body and smell was her first source of comfort and succor. The reality: Fathers or other parenting partners can become a second “mother” for the child. Clara often turns to her daddy as the more nurturing, less exhausted and irritable parent. I could lock that Bad Mommy yoke around my neck forever, or acknowledge that Clara and Danny are better off with the relationship my illness forced them to have.

Then, when Clara was around 3, she started sleeping in bed with me. As with the extended nursing, I kind of loved it. I was finally getting that snuggle time I’d missed in her infancy. Danny and I always figured we’d move her back to her own bed any day, but she’s loud and screams, and, well, we’re working on it. Guess what? Clara is happy and healthy, and she knows that both Mommy and Daddy will be there for her in the middle of the night.

The obvious question: Isn’t it hard with my husband on the couch? Well, yes. The big deal isn’t Danny literally or metaphorically coming back to bed. Anxiety isn’t one partner’s issue. It becomes a part of the marriage’s history. For a while, it becomes the marriage.

I'm a crier; floods of tears have always been part of how I process difficulty. For my husband, however, floods of tears look like a frantic signal of oncoming panic. We’ve had to work to let him trust me to fail and falter, to feel anxious and manage it.  I don’t get to suck in all the emotional light. Danny doesn’t want to be the guy who big-foots over his sick wife’s feelings, but sometimes I have to blow my damn nose and give him his turn.

Last September Clara started kindergarten. The same week she pulled on her new sparkly pink backpack with wings, learned to tighten her own new sparkly silver sneakers, and walked into her kindergarten classroom, I began a new teaching job. In addition to my other teaching job. In addition to writing yet another revision of my book. Danny was responsible for all school drop-offs after the first day, and most of the pickups. I didn’t feel as if I knew what was happening with my own child, just like when she’d been an infant and I was so sick. This time, however, I was making changes for the good, and so was she; we were both growing. Except our growth looked like a mess.

Clara loved her school, but she was exhausted, cranky, and – for the first time in her young life – regularly melting down with us at home. I wasn’t much better. At night, I’d stay up late prepping lessons or rereading my book, putting myself into sleep deprivation. On an October afternoon, I had a panic attack on the train on the way home, then another a few days later on my way to class, and then, inevitably, I felt the familiar hot-cold-looping-thinking during a class. It had been years since I carried Ativan in my purse, and now I found myself replenishing my “emergency” pill daily.

“I think I’m having a relapse,” I told my therapist. “Also, Clara is really stressing us out.”

“Both of your lives are very new right now,” she said. “Give it time.”

This is the reality of living with anxiety of any kind, you thread it through, having good days and bad days, weeks, months. A child complicates that. Your bad day isn’t yours alone.

We’re better now, six months in. I’m still sleeping too little, but the lack isn’t making me panic. Clara has gotten better at telling us what she needs -- and to deal when she doesn’t get it.

Yesterday, I went on a field trip with Clara’s class to a pizza bakery. When I had to leave, she cried a little, but then bounced off to recess with her friends. I went home and worked, then back to Clara’s school for pickup, and Danny was home in time for all of us to eat tacos together at the dinner table, listening to George Gershwin. Today or tomorrow might bring possible stomach flu (I just got a warning call from Danny), a babysitter crisis, and a cold snap for which we don’t have enough clean laundry. We’ll deal. It’s not recovery, it’s life.

Elizabeth Isadora Gold’s writing about motherhood, books, music, and feminism has appeared in The New York Times, The Believer, Tin House, The Rumpus, Time Out New York, and many other publications. Her piece about her postpartum anxiety, “Meltdown in Motherland,” was featured on the New York Times Opinionator blog. She lives in Brooklyn, New York, with her husband and young daughter. The Mommy Group (Atria | March 1)-- is her first book.