The victory speech from hell: Trump's surreal hour-long address was everything wrong about 2016

Last night, Trump gave perhaps the most absurd, incoherent speech of 2016 — and the networks refused to turn away 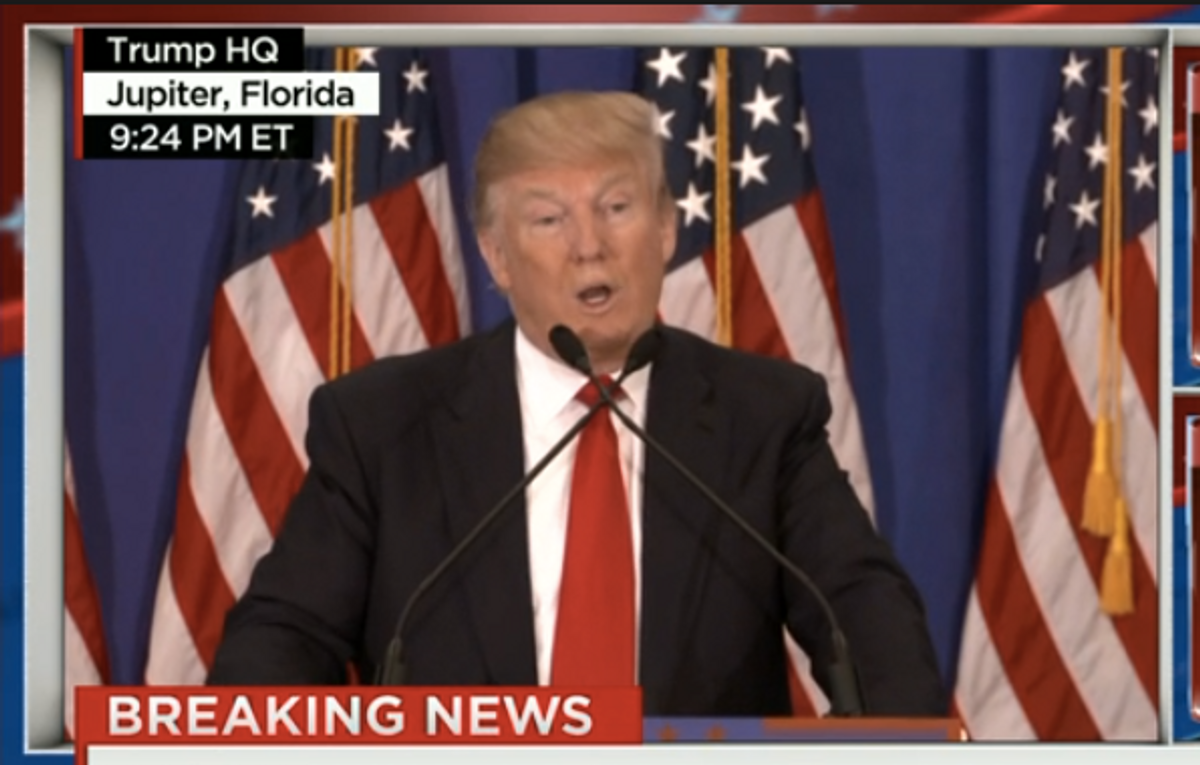 Donald Trump took the stage at his golf course in Florida just after 9 p.m. on Tuesday night. He was there to give a triumphant press conference after winning primaries in Michigan and Mississippi. What he gave instead was a totally deranged, nearly hour-long coke binge of a "speech" in which he spent more time hawking his water and his wine—appropriate for someone who probably thinks of himself as a messiah by now—than talking about anything actually happening in the Republican race. (He also showed off a bunch of steak; it was that sort of evening.) He eventually took questions from reporters, but the questions were barely audible. The familiar mixture of baffled incomprehension and sheer terror that accompanies all Trump occasions surfaced instantly. What also surfaced was one overwhelming question: Why in the world weren't any of the cable news networks cutting away from this nonsense?

While Trump was holding court, Hillary Clinton spoke to her supporters at an event of her own. She got exactly zero seconds of live coverage. Oh, and Bernie Sanders was pulling off one of the most unexpected upsets of the entire election in the Michigan primary—a scrambling of conventional wisdom with potentially large implications about the kind of electorate facing the nominees in the general election. None of it mattered as long as Trump was around.

CNN reduced the Democratic race to a graphic in the corner, which showed Sanders steadily increasing his vote share over Clinton. But all that had to wait—Trump was having fun with old ex-Yankees! Nothing, it seemed, could pull cable news off of its addiction to him, no matter how irrelevant or worthless his comments. It was perhaps the starkest display yet of the media's serial, monomaniacal focus on Trump, a focus that all-too-frequently slides into cynical, ratings-juicing irresponsibility.

It felt vaguely sickening to watch Trump use his platform to sell his stupid products and call out his supporters in the crowd while the networks eagerly let him do it. It was hardly a case of Trump hijacking the airwaves; to do that, there would have had to be a struggle from the TV side. The fact that this was happening at the same time as a series of both significant and exciting events was taking place elsewhere in the race made the Trump obsession all the more galling. If ever you needed a reminder that TV news puts the TV before the news, you had it, but what was so crazy about it was that it was terrible, terrible TV.

Luckily for cable news, the counting of votes in Michigan went on for hours. It gave the networks an opportunity to make up for lost ground. They even got to air a little Bernie Sanders press statement, which he gave in what must be the most hastily-assembled circumstances of the entire election season. Had the Democratic race gone as tidily as all of the (incredibly wrong) polls and pundits had predicted, we would likely have been given an essentially all-Trump evening.

Look, it makes sense that Trump gets some of the crazy amounts of airtime that he does. He's indisputably the biggest story in American politics right now. But there comes a point where the insistence on dropping everything so that another one of his incoherent stemwinders can take center stage becomes not only pointless but also actively damaging to the networks. Their willingness to not only be Trump's pawns but also his partners in crime has to count as one of the more nauseating aspects of the 2016 election. It's bad enough when anchors indulge his bigotry; when they indulge his Drunk Uncle-level nonsense, it just makes them look like fools.