Missouri Democrats lose after filibustering an anti-gay bill for 40 hours, but their feat may help defeat the bill 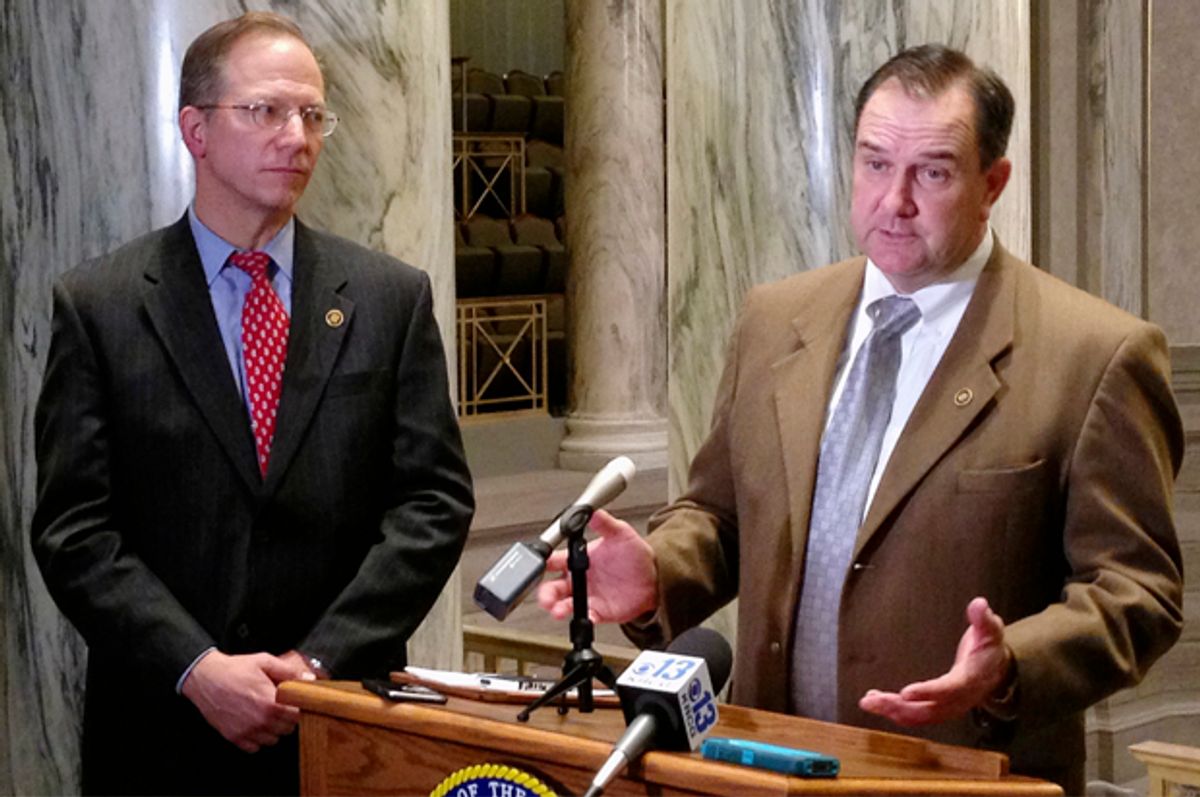 Mike Kehoe talks with reporters as Bob Onder looks on, at the Missouri Capitol in Jefferson City, March 9, 2016. (AP/David Lieb)
--

While the national news was mostly focused on the ongoing primary race Tuesday night, there was high drama going on in the Missouri legislature, of the kind we haven't seen since Wendy Davis took her pink-sneakered stand for abortion rights in Texas. Democrats in the Missouri state senate conducted a nearly 40-hour filibuster in an attempt to shut down a bill meant to make it easier to discriminate against gay couples in the state.

The filibuster, which is the longest in Missouri history, started on Monday afternoon and continued all through Tuesday night. Republicans broke it on Wednesday morning with an obscure procedural move.

The bill, SJR39, would write anti-gay discrimination directly into the state constitution. The Republican caucus is denying this, of course, because rule No. 1of conservatism is never admit your true motives for anything. The Republican majority Twitter feed defended the bill on Twitter:

And Ted Cruz, creepy pandering machine, was eager to jump in:

Missouri: Remember in November the Democrats who filibustered over 30 hours to fight against religious liberty. #DefendReligiousLiberty — Ted Cruz (@tedcruz) March 9, 2016

The problem with this gambit is that it only makes sense if you believe religion is only about gay-hating. There are thousands upon thousands of religious beliefs that one can hold, but according to Republicans in Missouri, only one is important or relevant enough to be protected on the grounds of religious liberty: The belief that same-sex marriage is wrong.

The state cannot penalize an individual who declines, due to sincere religious beliefs, to provide goods of expressional or artistic creation for a same sex wedding or wedding reception.

So, if you hate gays, that's a super-special religious belief that enjoys an extra-special level of consideration that exempts you from all laws and regulations meant to preserve the peace in a diverse society. But if you have any other religious belief that might come in conflict with the real world, piss off. "Religious liberty" for the homophobes, lectures on going to hell for the rest of us.

Indeed, the defenders of this law made a huge stink about how narrow it really is. "No one should be compelled to make a work with their own hands that's offensive to their beliefs," state Senator Bob Onder said during the debate, trying to highlight how little impact he thought the bill would have. The problem is this argument also highlights how it's only homophobia that is protected, and not religious belief broadly.

"Missouri is a very Christian state," agreed fellow Republican Senator Mike Kehoe, not even bothering to hide that this is about putting one religious belief over all others.

Laws like this aren't about religious liberty at all, but about the opposite: Prioritizing one set of religious beliefs over another, which is a direct violation of the first amendment's prohibition against "establishment of religion."

Ever since same-sex marriage was legalized by the Supreme Court, Republicans have been put in a tough spot, politically speaking. Most Americans are ready to move on from the gay marriage battle, and continuing to push for a ban on gay marriage will likely backfire on Republicans. But blowing the entire issue off altogether isn't going to work, either. Demagoguing on how the gays are going to destroy the country with their marriages has been a reliable way to turn out evangelical voters and Republicans can't afford to lose that, especially in the era of Donald Trump.

So the solution they've hit upon is to work this whole narrative about how Christian bakers are oppressed by the dirty queers forcing them to bake sodomy cakes.

On its surface, it seems like a good political strategy. It shifts the narrative around, so gays are supposedly picking on Christians. It appeals to the American sense of freedom by arguing no one should have to bake a cake for someone else that they don't like. Bundle it up in the guise of "religious liberty", a thing that sounds good to most people, and it should be a slam dunk way to appeal to evangelicals while evading the larger discourse about homophobia, right?

Except, as this battle in Missouri shows, it's just not that simple to sell the story that this is just about "religious liberty" and not actually just an excuse to bash gay people.

You could write a broad bill that doesn't even mention gay people in it, instead just generically granting the right of any business or organization to discriminate against whoever they like, so long as they invoke religious reasons for doing so. But then you run the very real risk that businesses will refuse to serve people of color or women who wear pants or whatever, all on the grounds that their religion requires them not to mingle with such unclean sorts. That is politically toxic, since no one wants to see the return of black people being banned from lunch counters. And, in Republican-run states, they really don't want to write a law that could grant Muslims broad rights to refuse to sell alcohol or pork products, even if they work in a store that stocks such things.

Or you could do what Missouri Republicans did, and get extremely specific by only granting "religious liberty" rights to discriminate against gay people. But doing so exposes how much of a lie the whole "religious liberty" gambit is, since the only people who qualify for the exception are fundamentalist Christians who have this one specific belief. True religious liberty, at bare minimum, is inclusive of not just all faiths but non-believers, too. Otherwise, it's just a religious privilege given out as a reward for bigotry, which is not a good look.

Missouri Democrats may not have been able to successfully stop this bill — which still has to go through the state house and win in a general election before the constitution is amended — but this filibuster did hopefully help raise awareness that anti-gay "religious liberty" measures are actually an attack on religious liberty and an attempt to elevate a fundamentalist interpretation of Christianity above all other belief systems.