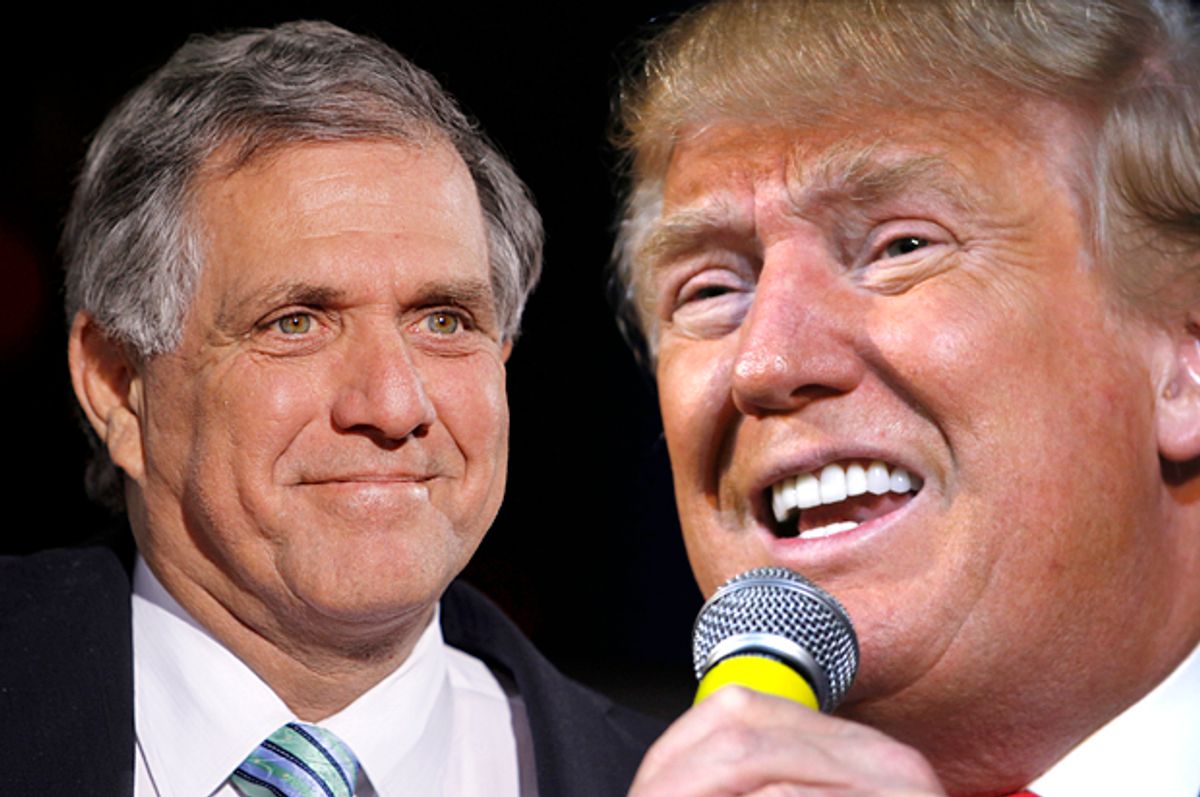 Right after the Feb. 25 Republican debate, front-runner Donald Trump was interviewed at length on the debate stage by CNN's Chris Cuomo. The move seemed a bit odd, since during the debate Trump dominated the speaking time compared to the other candidates. And now he was given even more time, immediately after the showdown, to address the CNN audience. (Sen. Ted Cruz was later interviewed, but Trump's immediate interview seemed like an attachment to the actual debate.)

But it didn't end there. Less than an hour later, Trump reappeared for another lengthy CNN one-on-one interview, this time with Anderson Cooper. Some viewers started to wonder if this was a debate broadcast or a paid commercial for the Republican. "Its [sic] official. CNN is your 24-hour Trump channel," tweetedWashington Post writer Joe Heim.

That Trump receives an unprecedented amount of media attention, and especially free television time, has been well documented in recent months. (Even Fox News is marveling at the "clear imbalance.") But to date, the press hasn't been especially honest about the wild disparity.

Still clinging to the traditional campaign model that suggests candidates receive the amount of coverage that mirrors their importance and their standing in the race, the press insists the never-ending gusher of Trump media attention simply reflects his political significance.

Or, that Trump just really likes to give interviews.

Trump is drowning in CNN attention because he says yes to interview requests? That doesn't add up. It doesn't explain, for instance, why CNN and the other cable news channels often cover Trump rallies live and interrupted. There's nothing especially newsworthy about most of the rah-rah events. So why block off hour after hour and allow the GOP frontrunner to speak uninterrupted while being showered in adulation from his fans?

Where's the "news" in that?

"I find the coverage of Trump, the over-coverage, the fawning coverage of Trump on TV, allowing him to call in, to be one of the most shocking things of the last 30 or 40 years," Walter Shapiro recently told Media Matters. A campaign veteran, Shapiro covered White House runs over several decades for outlets like The Washington Post and Newsweek.

"The news channels have always seen their revenue driven by major news events, many of which are unplanned, but elections are an exception because they are predictable," Derek Baine, a research director at SNL Kagan market analysis company, recently explained to U.S. News.

Writing at The Observer, Ryan Holiday suggested a new paradigm is in play this campaign season:

Politicians have always sought to manipulate the public. What's changed is that media is now not only a willing co-conspirator, they are often the driving force behind the manipulation. No longer seeing itself as responsible for reporting the truth, for getting the facts to the people, it has instead incentivized a scrum, a wild fight for attention in which anything that attracts an audience is fair game. And as long as theirs is the ring where the fight goes down, they'll happily sell tickets to as many as will come.

Is Trump's backstory of being a political novice, a bigot, and former reality TV star unusual for a presidential campaign? Yes it is. Is Hillary Clinton's backstory of trying to become the first female president in American history unusual? Yes it is.

So why does Trump land double and even triple the TV airtime that the historic Democratic front-runner gets? The press celebrates Trump as a political phenomenon even though Clinton has quietly accumulated a larger share of votes than him this primary season.

More data: In the last 60 days, Clinton has been mentioned approximately 45,000 on cable news,according to the GDELT Project using data from the Internet Archive's Television News Archive. Trump? 95,000 mentions.

Today's revolutionary campaign coverage has been sparked by the fact that Trump can create big bucks for news outlets via clicks and ratings. For instance, primary season debates in the past were never considered big moneymakers. They drew modest television audiences and were carried by news divisions as a way to forge their brand and build goodwill. But when the first Republican primary debate of the season last year drew an astounding 24 million viewers, everything changed.

CNN's "five highest-rated moments since January 2015 are all from presidential debates," The New York Times reported.

That kind of windfall has created the unsettling suspicion that Trump is awarded unending, and not-very-pointed, coverage in order to generate a news profit. It's created the lingering distrust that the campaign press no longer works as a check on abuses and excesses, but has become part of the formula that celebrates abuse and excess.

"Donald Trump may be good for ratings, but in its determination to court him, TV news has sacrificed its duty to interrogate the Republican candidate and his policies," wrote Lloyd Grove at the Daily Beast. "Wall-to-wall coverage doesn't necessarily mean sharp critical scrutiny."

And that's this campaign season's big question: Are journalists going easy on Trump because he represents the goose now laying the golden eggs?

Note that the cable news town hall forums "have also become a moneymaker for CNN," according to the Times. And yes, these were some of the questions put to Trump at CNN's last town hall:

Watching a different, albeit equally soft, Trump town hall on MSNBC, Slate's Isaac Chotiner bemoaned how "It remains shocking that after months of bigoted comments and almost pathological dishonesty, Trump still lands these types of interviews."

Indeed, why would a candidate who spouts so many ugly, bigoted and juvenile comments often be subjected to such soft coverage? ("It's pathetic," says former CBS reporter Eric Engberg.) And is there a quid pro quo for access?

Remember that CBS executive chairman, president, and CEO Les Moonves recently insisted the Trump campaign "may not be good for America, but it's damn good for CBS," adding, "Donald's place in this election is a good thing."