Q&A: A Rutgers historian argues that talking about authoritarianism is necessary to understand where we are 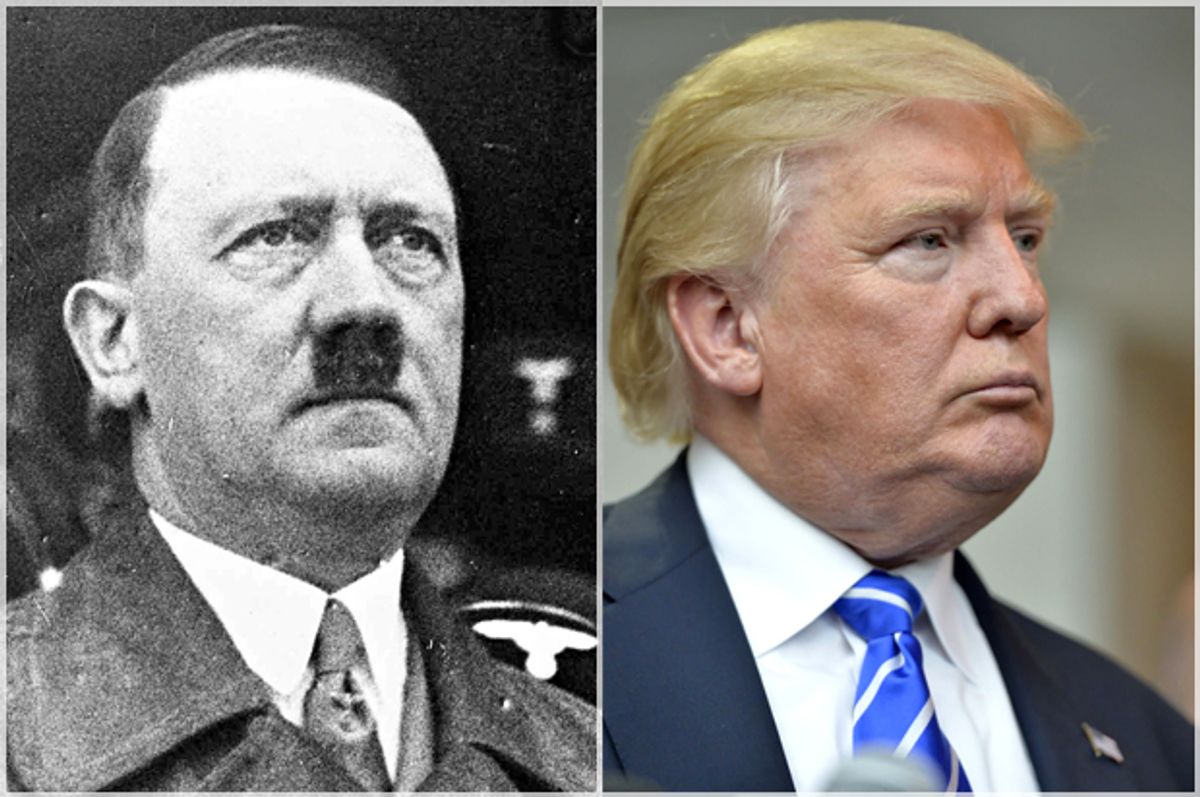 There’s no more extreme way to refer to a politician or political movement than to draw a parallel to Adolf Hitler. It’s often seen as an over-the-top caricature and a case of unfair name-calling.

Over the weekend, comedian Louis C.K. denounced Donald Trump as another Hitler. On Tuesday, Trump said that comparisons like this one were “ridiculous.”

But David Greenberg, a sober-minded Rutgers University historian who is the author of the new “Republic of Spin,” says that discussing Hitler and the Nazis in the context of contemporary politics is not only fair sometimes, it’s actually healthy and useful.

Salon spoke to Greenberg, who is also the author of “Nixon’s Shadow,” about the responsible use of these historical parallels. The interview took place from New York City; the conversation has been lightly edited for clarity.

So how far do these comparisons go back?

This has been out there on the right for a lot of Obama’s presidency. In some sense, we have it with every presidency. You had it with [George W.] Bush, there was a ton of it with Nixon. I’m sure you could find it with Reagan. Basically, because our system is so focused on the presidency, and there’s the fear of the party out of power that the president and his party will abuse power, we reach for these metaphors.

Andrew Jackson and 19th century presidents were defined as monarchs; in the post-World War II era, they’re looked at as dictators, and Hitler is the most inflammatory and most extreme example you can come up with.

So it’s not just latter-day partisanship. Presidents have been denounced this way, with the terms a little different, for a century or more, it sounds like.

It’s sort of in our founding – we broke away from a monarchy, and we pride ourselves in our democracy and popular sovereignty. So the great fear, rooted in our beginning, is the abuse of executive power, and the depriving of people’s freedom through centralized power. That’s a theme you see…. every president who tries to accomplish something gets these accusations at some point or another.

A lot of the time, this is run-of-the-mill political sloganeering. Nobody is analyzing, in a serious way, whether Obama is really like Hitler or George W. Bush is really like Hitler. You might see it on a poster, or on an Internet meme; it’s done for the sake of provocation, for the sake of expressing anger. It’s done for political effect…. It’s not really taken literally.

Whether it’s appropriate or not, Trump’s appearance has led to a spike

There are probably some people who generally think Obama is a fascist. The difference with Trump is that we’re analyzing it in a serious way: People are trying to understand what is fascism, and trying to see if this is an appropriate way to look at the Trump phenomenon. There are superficial resemblances that make it much more plausible than calling Obama or Bush a fascist, much less comparing them to Hitler. Myself, I’d use the word authoritarian rather than fascist, which acknowledges that there are many ways that Trump falls short of that fascist model of Hitler or Mussolini.

What is it about the fascist comparison that seems excessive?

The fascists did repress democracy. We can see that Trump in some ways in contemptuous of democracy. But we don’t see that he wants to extinguish democracy. He’s made a few remarks about coming after the press and his contempt for the political establishment. Those comments have the vapors of fascism, which make us pause and worry. But they don’t add up to anything resembling a fascist program, in my view.

Is it more accurate to compare Trump to someone to Mussolini? He’s not urging a uniting of the government and the corporate world.

In that sense, the only connection with Trump is [the idea that] the businessman’s good business sense is superior to the politician’s political sense. In [the novel] “It Can’t Happen Here,” and classic dystopian fiction about fascism, there is this businessman element: That in the American tradition especially, this hope – from the supporters – and fear that the man from the business world -- who has contempt for democratic processes, and prefers the hierarchy and order-issuing style of the CEO to the bargaining style of the president – is going to take power….

If you are fed up with gridlock, and partisanship, and a Congress that seems to get nothing done, you might crave that authoritarian style, and the business world’s values of giving orders and getting stuff done -- also the military’s values… They may seem better than the bargaining and bickering and compromising of politics. Looked at another way, we realize the bargaining and bickering and compromising is what makes democracy what it is. So there’s a tension there.

There’s the famous line – Godwin’s law, which says that online discussions will always lead to Hitler or the Nazis… How does that fit into this?

I think that’s a really unfortunate formulation. It opens people to the charge of not playing fair in their arguments should they invoke Hitler. It takes off the table the case that in American public life we regularly uphold as the extreme we don’t want to reach.

So it’s true that you have to go a long way before you get to Hitler. But a great deal of our political consensus, our political norms, are formulated on the understanding that we don’t want totalitarianism here. We don’t want a fascist to arise. So in some sense it’s a very legitimate question to ask – it tests the outer limits of political behavior.

So if we’re going to discuss American politics accurately, we need to have that as an option, as part of our vocabulary.

Right. And part of our consensus of what American politics is and should be, post-1945, is a system that doesn’t allow a Hitler to come to be. That in a very real sense, that’s really important to how we think about politics, and how we formulate our own democracy. If in the colonial era, it’s how we avoid a monarchy, with checks and balances, post-World War II it’s how we avoid fascism or Communism… How we avoid Hitler.

And our understanding that Hitler came out of Weimar Germany, and democracy, and a civilized city, as opposed to some “backwards” society that we might expect to defer to a dictator makes it all the more relevant to us as a negative example.

A lot of us tell our kids not to compare people to Hitler, but you make a good point here.

We can’t do it cavalierly: Most people aren’t Hitler. But the way Godwin’s Law is invoked is to take off the table the rhetorical question. It can be a useful rhetorical or philosophical move to make: It forces us to make distinctions about what we will and will not accept in our democracy.

So my closing question: Does anybody in this race really resemble Hitler? Is it fair to throw that comparison around?

We’ve seen the Trump-Hitler comparisons spike over the last few days. Louis C.K. has said this guy’s like Hitler, or this guy is Hitler. There have been serious pieces by journalists and academics; one opened with Sinclair Lewis’s “It Can’t Happen Here.”

And so as Trump has seemed to be increasingly this phenomenon that’s unstoppable, it’s forcing the question… The way he got people to raise their arms to pledge to vote for him – the photographs of that had chilling resonance to the Hitler salute. I don’t think Trump intended it that way.

Again, I would use the term authoritarian. I think Trump has distinctly authoritarian tendencies; we don’t have to compare him to Hitler to say that.

But we also shouldn’t chide people for thinking about Hitler and for worrying about the rise of a Hitler. Those are not the same thing. It’s not that Trump is going to round up millions of Jews or Mexicans, for that matter, for death camps. It’s saying that the same erosion of democracy that occurred in Germany in the ‘20s and ‘30s could happen again, and is what’s happening here in this unpredictable and frightening election year… a version of what happened in Germany.

It’s to compare him to Hitler in every respect. I think there’s an implicit understanding that nobody is accusing Trump of planning a Final Solution. But nonetheless, there are some responsible and thoughtful treatments of this question and some that are somewhat hysterical. We still need to be sober and responsible in our rhetoric so we are not engaging in fear mongering.