Why Bernie's on shaky ground: White men are leading him to victory as he remains a tough sell with other voters

Sanders surprising victory in Michigan still sticks to the same pattern: He's winning white men as others stay away 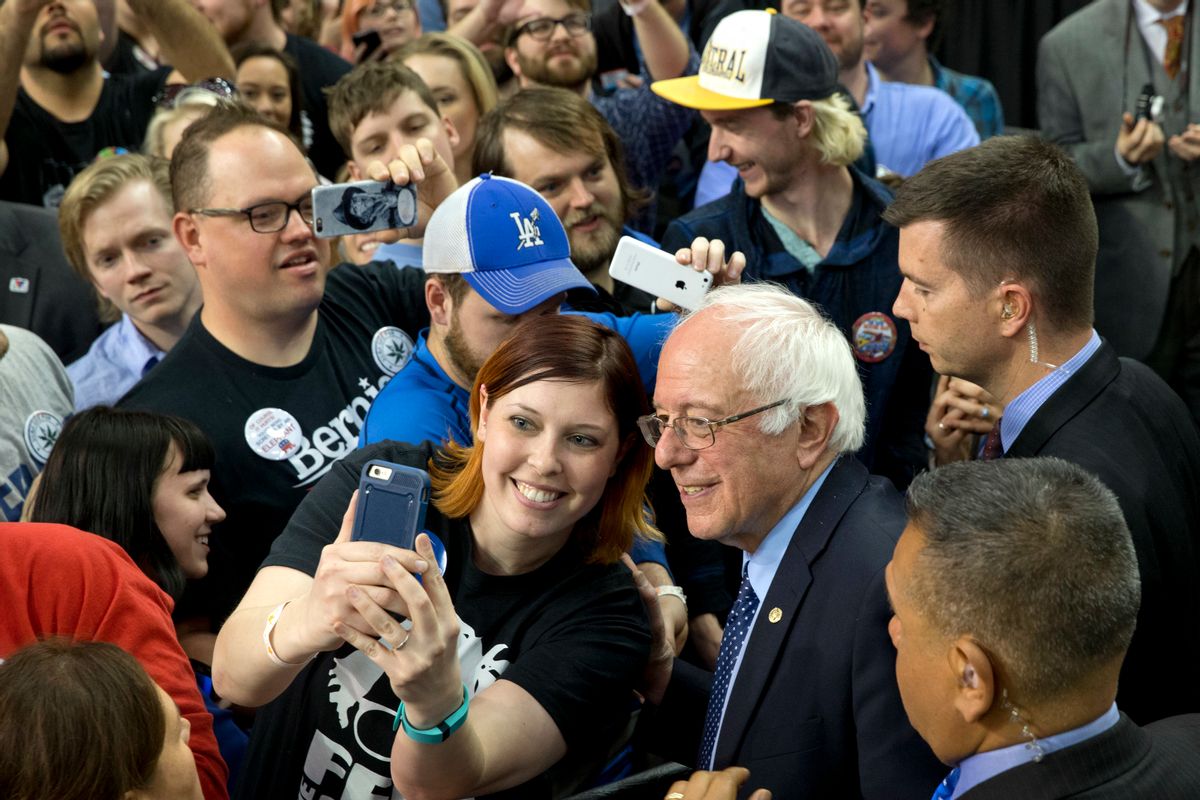 Bernie Sanders' win over Hillary Clinton in the Michigan Democratic primary on Tuesday was a huge upset. Even though Sanders won by a sliver (meaning he only nets eight delegates over Clinton from the win), Clinton went into the polls with a comfortable 20+ point lead, which evaporated in the voting booth. Sanders clearly did something right, likely hitting Clinton hard with accusations that she'd push for trade policies that export jobs overseas, a salient issue for Michigan voters.

As surprising as this result was, however, the exit polling fit right into the pattern that we've been seeing from other Democratic primaries. CNN shows that women and people of color support Clinton. Sanders eked out his win in Michigan on the backs of white male supporters, his most robust group of supporters across the country.

This isn't unusual, either. Clinton is sweeping with people of color everywhere. And while Sanders has won with women in a couple of states — New Hampshire, Vermont — exit poll data shows that in most states where Sanders won, he didn't win the majority of women.

Maybe getting white men while losing everyone else is enough. There's no doubt that Tuesday's results made the delegate race a little tighter and likely invigorated the Sanders campaign to keep on pushing. It's not inconceivable that a few more wins like this could turn the tide for Sanders.

But if so, nominating a candidate whose base looks a lot more like the Republicans than the Democrats is a problem. The grim reality is that, in a general election, white men will vote for the Republican. Nominating a candidate whose strongest base of support comes from the same demographic that will never vote for a Democrat should give us all pause. It goes against all the lessons we learned from Barack Obama about coalition building and how Democrats win because of their diverse voting base.

For a long time, there was a popular theory in liberal circles that the way to win a national election was to nominate white guy Democrats, on the theory that would chip off enough Republican voters to push the Democrat over the top. Of course, believers in this theory were thinking of white men that were diametrically opposed to Sanders on the white guy scale, i.e. more Jim Webb and less socialist Jewish guy from Brooklyn. But since Sanders is running on a Thomas Frank-style assumption that current non-Democrats will be wooed by socialist arguments put in a populist frame, the basic gist is the same: Win the white guys, win the war.

The problem with this is that, in 2008 and 2012, Obama won resounding victories by going hard in the opposite direction. His campaign focused on the diverse Democratic coalition, prioritizing turnout of people of color and women over trying to woo white male voters.

Obama's victory margins alone should be enough to convince anyone that his was the winning strategy. But Obama's focus on coalition-building and diversity was about more than just winning the next election. There's good reason to hope that multiple election cycles of Democrats running the Obama script could create a cohesive and powerful voting base, one that would escalate the Republican demise as a cantankerous party of pathetic people clinging to a fading social order. Clinton has been explicitly focused on running the Obama script, putting her efforts towards building this Democratic brand centered around diversity.

It's not a surprise that white liberal men are drawn to the way Sanders focuses on economic framing instead of focusing on race and gender issues (though Sanders clearly agrees with the liberal opinions on those issues).

But outside the Democratic coalition, the majority of white men are moved by race and gender issues, and are more interested in voting to preserve their privilege than concerns like the social safety net or more regulation of the banks. If the latter issues moved them, they'd already be voting for Democrats. That's the issue. There's just not a lot of evidence that being popular with white men in the Democratic primary translates into pulling more white male votes in a general.

But, as the Obama campaign showed, there is evidence that winning a diverse coalition in the primary can translate to getting the same coalition to turn out in the general, because you're getting people vote somewhat sporadically to the polls for you. Of course, it's possible that was just a one-off phenomenon, unique to Obama and a result of his charismatic campaigning strategy. Clinton probably won't turn quite as many people willing to wait in line for eight hours to vote.

Still, particularly if an open bigot and misogynist like Donald Trump is the Republican nominee, having a candidate whose strategy is building a diverse coalition focused on women and people of color as the Democratic nominee is going to matter. That will sharpen the differences between the candidates and likely increase passion and turnout amongst the Democratic base.

Going into a general election with two candidates chosen by white men will make everyone else feel a bit shut out. The problem is "everyone else" is who a Democrat needs to win an election.

Of course, all horse race speculation aside, there's an ethical dimension to this. The Democratic case that their party is the party for everyone is undermined if the people who have traditionally held power in our society for most of its history, white men, continue to control the direction of the party. Sanders will probably win women and people of color in a general, but they will be voting for a candidate the white men picked.

Saying that could be dismissed as playing "identity politics" (though being a white man voting for a white man is its own form of identity politics), but having a party that is still being controlled by this one demographic, just as it has been up until the Obama campaign, should trouble us all.